What's the shape of a burst if the burst extends beyond a confined area?

The description of the area of a burst says that

A burst spell affects whatever it catches in its area, even including creatures that you can’t see. It can’t affect creatures with total cover from its point of origin (in other words, its effects don’t extend around corners). The default shape for a burst effect is a sphere, but some burst spells are specifically described as cone-shaped. A burst’s area defines how far from the point of origin the spell’s effect extends.

Emphasis mine. I'd always read this as a burst, if initially severely confined, continues from its confinement precisely, essentially conforming its remaining area to that of the confinement, as below, with the red dot representing a 30-ft.-radius burst's point of origin. 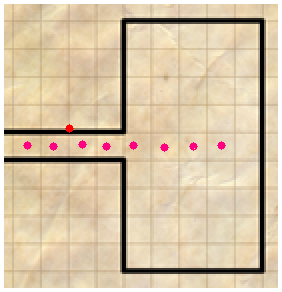 However, recently my players challenged this view, some saying that the actual area of a burst when it leaves confinement is, more accurately, either a cone... 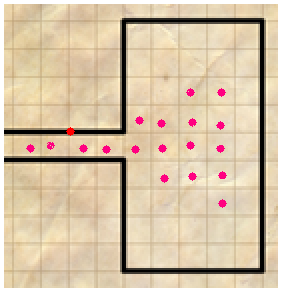 ...or the remaining burst. 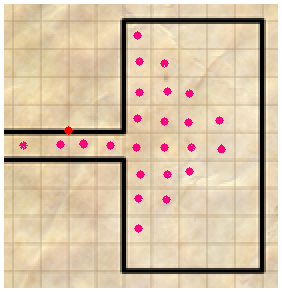 Were any of us correct?

Targeting
Spell checks which squares it can "shoot" into just like you would would you be standing there, at the point of origin with a bow (assuming that bow has range of 30' with no increment). 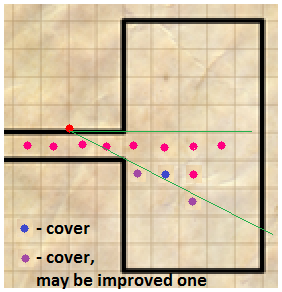 In the given example you may shoot at any square with a pink(?) dot without hindrance while anything in the squares with blue and violet dots has cover. Spell affects just the same places (with AC bonus being replaced with bonus to reflex saves).
Spell is completely blocked for the square only if you have no line of effect to that square (total cover). And to have total cover a square must be completely out of the area marked with green lines (touching the line with corner or border only is the same as being out of the area). Corridor is affected fully of course. Green lines are drawn for the not confined area only.

About Line of Effect 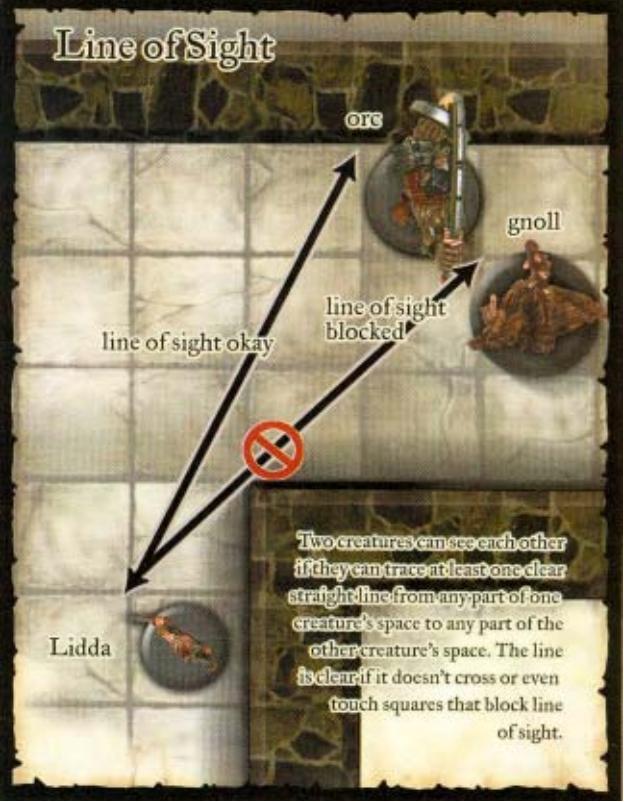 Note that line of effect description says: "It [line of effect] is like line of sight for ranged weapons, except that it’s not blocked by fog, darkness, and other factors that limit normal sight."

Some sort of disclaimer
1. You should have noticed that my picture is very similar to KRyan's. And if you'll give those in "violet" squares improved cover it would be not so different from simply not affecting them (hey, they already effectively has improved evasion and +4 on save = they probably will make it anyway).
2. There also is one nasty statement in the line of effect description, that says you need that one foot hole. It is not strictly connected, but one may argue that having a line to some no_matter_how_small portion of the square is not the same as having line of effect to that square. Now you will need some rule for how much of the square's area you must be able to affect to affect that square.

Because of those two things i at first thought not to create separate answer but clarify that situation in comments. Hope it will be helpful in some way.

To the area shape question
My paint-fu is regrettably bad, so i'll better limit myself to something like that: 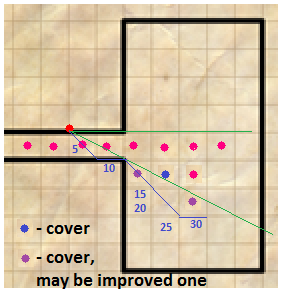 None of your examples seem correct to me. While almost everyone uses area templates, the rules specify that you have to draw lines out from the chosen center point until you hit an obstruction or reach the limit of the effect’s radius. These are known as lines of effect, and are actual, geometrical, 1-dimensional lines, not Line-shaped areas.

A burst, cone, cylinder, or emanation spell affects only an area, creatures, or objects to which it has line of effect from its origin (a spherical burst’s center point, a cone-shaped burst’s starting point, a cylinder’s circle, or an emanation’s point of origin).

A square is within the area if you can draw such a line of effect from the origin to any point in the square (and the distance to the square is not greater than the effect’s radius, of course).

However, if the square has at least one corner that you cannot draw a line of effect to, the target has Cover and receives a +2 bonus on Reflex saves against the burst.

Cover grants you a +2 bonus on Reflex saves against attacks that originate or burst out from a point on the other side of the cover from you. Note that spread effects can extend around corners and thus negate this cover bonus.

Note that these rules have a bit of a discrepancy, since the definition of cover refers to the concept as being specifically for the sake of ranged attacks, which a burst wouldn’t be. I don’t consider this a particularly meaningful discrepancy but it should be mentioned.

Since the effect is centered on the top wall, a line through the top corner of the doorway extends straight to the right. Thus, everything above the doorway is not included in the area. This nixes the second and third drawings.

A line drawn through the bottom doorway, on the other hand, continues out into the room at an angle, rather than straight. This nixes your first drawing. The bottom half of the second drawing is close to correct, but includes two squares that are outside the range of the effect: the bottom-right-most square and the one directly above that one. 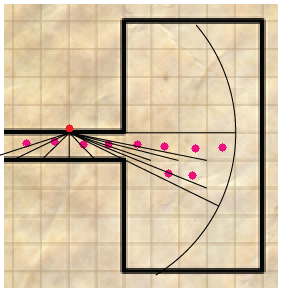 Note the above does not include the two squares that are affected but where creatures would benefit from Cover. The circular radius-limit is also misleading

Not the answer you're looking for? Browse other questions tagged dnd-3.5e battle-map or ask your own question.

6
Do area of effect spells damage objects?
3
Do light and darkness from spells turn around corners?
3
Do you fall through the floor when you cast prismatic sphere?

4
Can terrain shape area affect spells or attacks?
3
When a spell affects a burst centered on the caster, does moving into or out of the burst change who is affected?
8
Does a burst centred on the caster affect the caster?
6
How does the psionic power disable work?
8
What is the area affected by Gust of Wind on a grid?
3
How is the Fiery Burst feat targeted?
3
What’s the duration of the winds of Flaywind Burst?
4
How to measure on a grid the area of a sphere area spell or effect centered on a creature?
6
What other spells can power the Locate City Bomb?
3
On a grid, what is the area of effect of Spirit Guardians?