Is a fire with more oil flasks longer or more intensive or neither?

Say my party anticipates a mummy in that coffin in the back of the pyramid... (Yeah, I know, no one would suspect that, right?) So, before opening the lid, they decided to empty all their flasks of oil on the floor on one side, the side where they will be standing, expecting the mummy to come that way. (It won't budge until touched in my case, but the party won't know that. It would not really change the fact that the mummy would want to move in the right direction)

Would the damage be the same whether there is the contents of one flask or 10 flasks?

If the damage is the same, can we assume that the flames will continue for 2 rounds x number of flasks instead of just two rounds? (In that case it won't be useful since the mummy will want to get out of the burning area...)

The problem in question isn't really covered by the rules.

However, there are rules which govern fire in real life that you can use to determine whether a fire will be stronger or burn longer. And those rules can be found with this image right here: 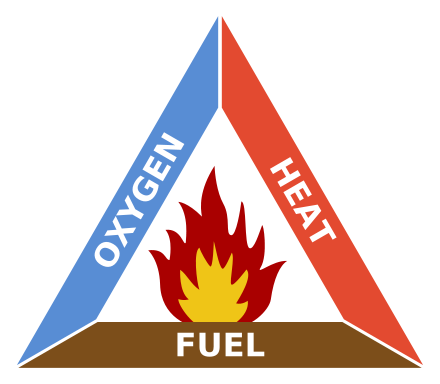 In order for there to even have a chance for there to be a fire, there needs to be an ignition source, a fuel source, and plenty of oxygen. Adding more fuel to a fire will most certainly make it burn longer, but unless there's some sort of reaction it won't make it burn hotter. Normally you need a high concentration of Oxygen to make fire burn brighter and hotter. So adding more oil to the fire would likely increase the time the fire burns or the width of the fire if you happen to fill multiple squares with oil.

The rules state that one flask of oil fills a five foot square and deals 5 damage if someone walks through it. If you were to pour more oil on the same square either it would spread out and increase the area of the flame or if there was a concave area with which to fill with oil it would collect and burn for x number of rounds times two, x being the number of oil flasks you use.

If it spreads out its limited to two rounds burning unless you drop more oil flasks while it burns, I don't see any reason to deviate from that. Trying to get 10 damage out of the flasks doesn't seem to be in the realm of possibility, but extending its duration is probably something you'd have to ask your GM about.

It is illuminating (heh) to look at the full text:

Oil. Oil usually comes in a clay flask that holds 1 pint. As an action, you can splash the oil in this flask onto a creature within 5 feet of you or throw it up to 20 feet, shattering it on impact. Make a ranged attack against a target creature or object, treating the oil as an improvised weapon. On a hit, the target is covered in oil. If the target takes any fire damage before the oil dries (after 1 minute), the target takes an additional 5 fire damage from the burning oil. You can also pour a flask of oil on the ground to cover a 5-foot-square area, provided that the surface is level. If lit, the oil burns for 2 rounds and deals 5 fire damage to any creature that enters the area or ends its turn in the area. A creature can take this damage only once per turn.

Consider how you would rule for a creature covered in non-burning oil who entered a burning oil covered square. I would rule that they would take damage twice; you may rule otherwise.

Also a creature moving from burning oil covered square to oil covered square takes damage in each square but takes no more damage if they retrace their steps - this is clearly an abstraction - injury from heat in real life is a non-linear function of heat transfer, temperature and duration.

You can approach your ruling in several ways.

"You can also pour a flask of oil" so you can't pour 2 so the problem doesn't come up. Of course this does not prevent you from pouring oil on an adjacent 5-foot-square area.

1 pint (0.6l) of oil evenly spread across a 5-foot square (2.3m^2) is about 1/100 inch deep (0.25mm). This is considerably less than the meniscus you would expect on oil (~2-3mm) so it is more likely that the oil is concentrated in a puddle or series of puddles across the square; especially since you "pour" it.

On that basis, it would be reasonable to rule that it would cause additional damage up to the point where the whole square was covered to a depth of say 2mm (8 flasks) after which each additional 4 flasks would extend the duration by 1 round.

"A burning flask of oil is the physical manifestation on the material plane of the ongoing struggle between the elemental forces of water (oil), fire, air and earth. This is why the same amount of oil will burn for twice as long when spread on the ground as it does when spread over a living creature for a living creature contains within it the essence of fire which the earth lacks" - Jongril the Sage, CY 456.

The duration won't increase as a result of stacking multiple flasks of oil. The damage might.

You can also pour a flask of oil on the ground to cover a 5-foot-square area, provided that the surface is level. If lit, the oil burns for 2 rounds and deals 5 fire damage to any creature that enters the area or ends its turn in the area. A creature can take this damage only once per turn.

If lit, the oil burns for 2 rounds. So unless you can find a way to only light some of the oil at a time, it will only burn for 2 rounds. As for damage stacking, that might actually work. The only thing that seems to prevent it is that once you've covered a square with oil, does it still count as a "level surface" for you to cover with oil again? If it does, and you can keep piling up the oil, there's nothing stopping each flask's worth of oil doing its 5 damage.

Personally, I'd probably rule that the oil spreads out as you pour more on, since that makes sense (to me anyway). If you pour out 2 flasks of oil on the same spot, it's likely to run and spread out. So you end up with a 7~ foot square that acts as normal.

With that said, this is just what the rules say. One of the main objectives of having a DM is to deal with situations like this. If you want it to burn longer or hotter, that's your decision to make.

However, there is one thing to be wary of in this situation: precedent. The moment you allow for this kind of stacking, your players have every reason to build a mass oil delivery system and start using 100 flasks of oil to burn dragons for 500 damage a round for the measly price of 10 gold.

At this point, you'd step in and say that you can't stack it that much. Then the question of exactly how much you can stack it will arise. So if you decide to houserule this, have the houserule clear in your mind before you go ahead.

I would also rule that this would cause the fire to spread out, or burn for longer if the oil was confined. A lamp oil fire is a pool fire; i.e. there is a flaming surface with a big puddle of not-burning liquid underneath it, as the actual combustion reaction takes place in the gas phase.

Adding fuel to the fire while it is burning would also cause the same behavior as well, albeit with a small flareup as the poured-in oil would be raised above its flashpoint (typically 30-70°C as lamp oil is a kerosene fraction) as it gets close to the flame. However, this isn't as hazardous as it looks -- kerosenes have a high enough flashpoint that the risk of a vapor flashback to the oil flask is low, unlike the case with fuels like gasoline or lighter fluid, which are volatile enough that trying to pour them on a live fire is an effective self-BBQ means.

So a more effective method would be to cover the target in oil. It takes 1 minute to dry. Nothing says the oil is burned off the target. Cover target with oil, and get +5 damage (once per round) from fire attacks for 10 rounds (1 minute) -

Not the answer you're looking for? Browse other questions tagged dnd-5e attack .

8
What happens to the flask that a potion is contained in after the potion is used?
50
My Wizard is conjuring a piece of the sun. How will this affect my setting?
14
How does allowing Sneak Attack with improvised weapons imbalance gameplay at the table?
8
What is the volume of a suspended cauldron?
12
Do thrown breakable items (like oil flasks) do damage when they hit?
26
Is a puzzle box considered locked?
7
Can you temporarily extinguish a non-magical light source to conserve it?
9
Can monsters use lair actions on targets in any part of their lair?
27
What should I do about another player who randomly starts PVP?