How do you transition from 1-page dungeon map to battle mat?

I have a bunch of different ways I use to make maps for my tabletop game. Sometimes I draw one on graph paper. Sometimes I use Dungeonographer. Sometimes I copy a map from a published adventure or use the donjon random generators. These all have the same output: a piece of paper (or maybe two) with a map on it, and the map is usually quarter inch squares, or so.

When it's time to put minis on a mat, though, I need to copy over the relevant details of the map to our battle mat. (We use Tact-Tiles.) This is fine when most of our map is overland detail and I'm just copying down one or two rooms in which combat will occur. For dungeon crawls, where there are more random encounters or where combat can chase through many rooms, it can lead to a pretty tedious drawing of the whole dungeon as we go.

I feel foolish for having to ask, but is there some trick, technique, or something to make it less tedious to transcribe maps from printed pages to the battle mat?

EDIT: Answers in general are great, but I should note that the best answers, for me, will be informed by this previously-unmentioned fact: the game venue is not my house, so I have limited prep time on site.

The best way that I've seen to handle this is to draw the map in chunks. Before the session, draw the first several rooms of the crawl, either as part of your pre-game prep or as people are coming in and getting set up.

If you have a break in your session (say, to order pizza), spend some time during that break erasing the map and drawing out a new set of chunks based on the players' location.

Most of the time the layout of the map isn't actually important (since the PCs can only really see the shape of the room). If it is important, just cover the map with paper, and remove sections that covered areas explored by the PCs.

You can also print a copy of the map without details on it, and hand that to a PC. Have them draw the map as you're doing the initial narrative.

This will work well for tactical games, like D&D 3 or 4, where the players move through the dungeon relatively slowly (room to room). For games where the players might fly through rooms quickly, use a small-scale map for the overall dungeon layout, and use the battle mat for the rooms where the fighting actually takes place.

You can purchase at a Staples or any other decent office supply a pad of 1" grid marked paper. These pads look like post-it notes and a that single band of sticky stuff at the top like post-it notes. They are about are about 24 inches wide by 30 inches tall.

Last year I went on vacation and took a few of these with. We ran an evening D&D game every night for 5 nights using these. I had no prep time since we where a Disney World during the day and early evening and then would get to the condo and play a couple of encounters. At one point I drew out the entire dungeon area on one of thee and just covered the un-explored parts with some paper. Then just do a reveal with the time comes.

They stay put on the table (sticky strip), they are huge and they are very portable.

This requires a bit of cash to setup and certainly isn't for every game group, but it looks pretty awesome.

The crux of this idea is that they use a short throw projector to show the map on a whiteboard that lays flat on the table. Most of the materials cost are in the projector, but the frame is a bit pricey as well and requires some construction. But the idea was to produce something portable that can be placed on the gaming table that everyone can sit around. This would probably solve your problem, although it may introduce a slew of new ones.

You can draw up many locations ahead of time and do other ones on the fly, keep them in a binder and lay them out (overlapping) as party enters new areas, then remove old ones as they recede into the background. Each sheet may only represent a small chamber, a half a large chamber, or even a bit of passageway. I number each in a corner and jot those numbers onto my full-dungeon map. For example: 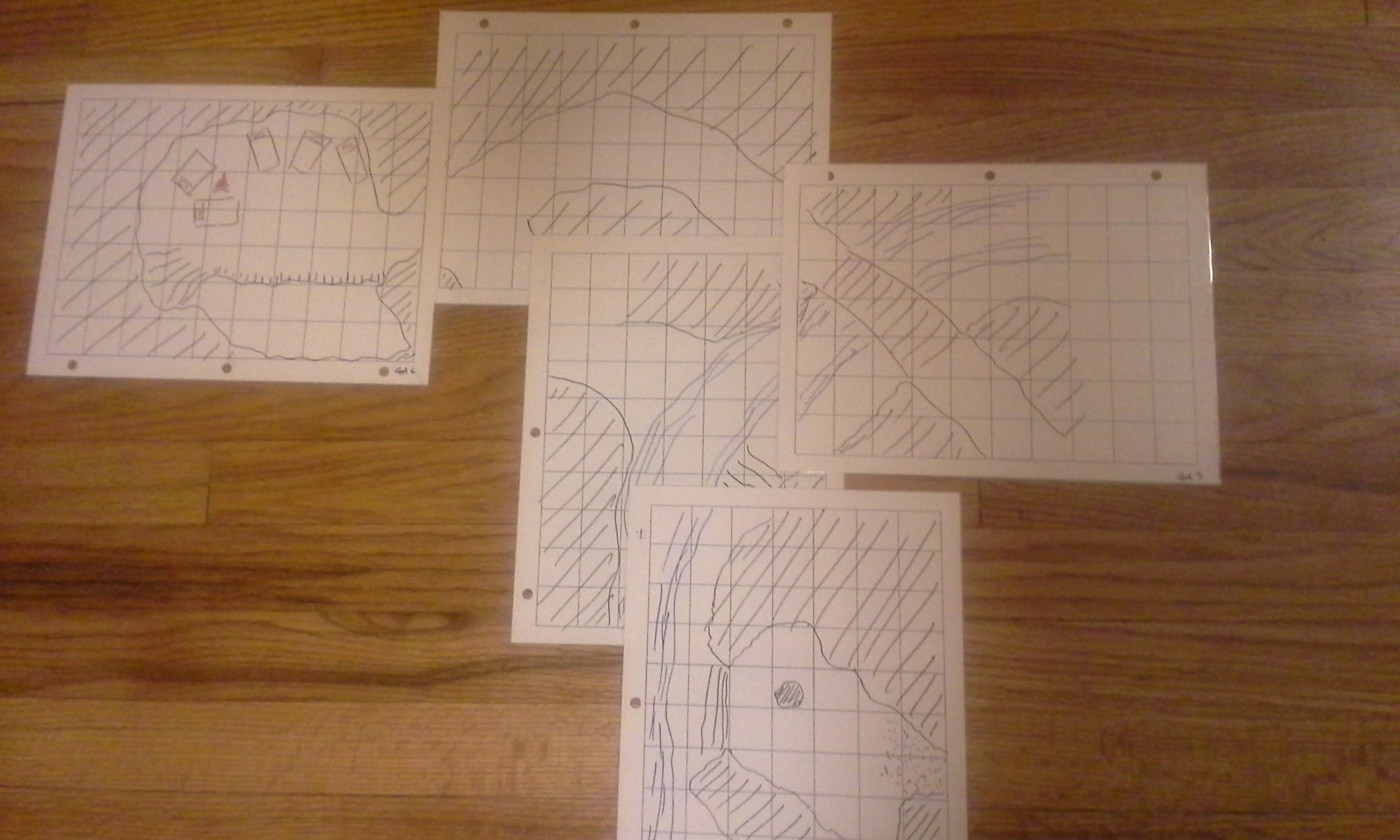 The lamination isn't strictly necessary, it just gets you reusability and quick-editing. Running off a hundred copies would work too. (Of course, you can go through a hundred tiles pretty quickly. I probably got close to that number running LMoP for new players.)

N.B. this is the same answer as I gave to How do I balance detailed encounter maps with not wanting to give away my dungeon layout?
Share
Improve this answer
edited Apr 13, 2017 at 12:45

Pens:
http://www.amazon.com/Chessex-Role-Playing-Play-Marking/dp/B0015IQO0Q/ref=sr_1_2?ie=UTF8&qid=1299520191&sr=8-2-spell
For wet-erase use. I'll do walls, doors, etc. with these pens (things that won't change). For dry erase (spell effects and such), I have a set of narrow pens (the same size as the wet-erase pens, and I'll just mark on the mat as play progresses. If a spell ends, we are covered. Just dry-erase off the effect, and the wet-erase walls DON'T wipe off.

Portability:
http://www.amazon.com/Safco-30531-Telescoping-document-black/dp/B0000AQNLW/ref=sr_1_1?ie=UTF8&qid=1299520803&sr=8-1
I just roll up my mat and toss into the tube. The pens go right down the inside and everything is together AND secure. I also laminated the poster-maps from campaign settings and roll them up with the mat.

Preparation of the mat:
What I do is take the afternoon of game and transfer my map to the mat (since wet-erase markers erase best within a day or 2 of writing them on). Roll it up and go to game. I haven't needed this yet, but if I have a full-sheet of graph paper (and my mat can only show about half of it), I'd highlight whatever has been revealed to the players at the end of the game so future games won't have any he said/she said problems on what players have done/not done (especially important for me now that I'm not in my 20s anymore and memory is starting to get fuzzier than I care to comment on).

1
How to copy maps from adventure books
21
How do I balance detailed encounter maps with not wanting to give away my dungeon layout?

8
Draw maps while playing rather than beforehand?
6
How big should my battle map be?
8
How do you represent sloping topography on a battle mat?
11
Is wanting the players to map dungeons incompatible with a battle mat?
3
Setting up a Dungeon Map
8
How to represent multiple stories of a building on a battle mat?
26
How can we allow remote players to effectively interact with a physical tabletop battle-map?
13
How long is it safe to leave marker on a Chessex battle map?
29
How can I effectively map a multi-level dungeon?
4
Are there positioning rules when using battles maps in Dragon Age RPG?