Turning radius of a flying thing in D&D 3.5

I am trying to turn the 3.5e SRD's degrees-of-turn-per-feet-of-game-movement numbers (such as 45 degrees of turn per 5' of movement with 45 degrees of maximum turn per square for a creature classed with poor flight maneuverability) into an actual minimum possible turn radius for a flying creature; however, I cannot figure out from the SRD text on the topic whether this figure is supposed to be interpreted as 45 degrees of turn between two points 5 feet apart, 45 degrees of turn over 5' of along-track movement by the creature, or flying 5' and then turning 45 degrees about a point.

Apparently, all the SRD has to say about the figures in question in the table is:

How much the creature can turn after covering the stated distance.

How much the creature can turn in any one space.

The DMG says the same, and the PHB doesn't have anything more to add. Where can I find more detailed information about how flight maneuverability works on the grid?

I think Shalvenay's answer from the Draconomicon is the only official answer you're going to get, and it may well be good enough for your purposes. But, I feel like giving an alternative answer anyway, based on the SRD and applied to all levels of manoeuvrability.

Here is the relevant SRD text (with one more entry than the question included), followed by my expanded explanations. Comments on Perfect manoeuvrability are excluded, because Perfect fliers have no turning restrictions whatsoever.

How much the creature can turn after covering the stated distance.

To turn while moving forwards, a creature needs to move forwards a certain distance (10 ft. for Clumsy fliers, 5 ft. otherwise). They can then add a turn to their movement for no additional movement cost (90° for Good fliers, 45° otherwise)

A creature with good or average maneuverability can use some of its speed to turn in place.

At a cost of 5 ft. of movement speed, Good fliers can turn 90° without needing to move out of their square at all; Average fliers can only do 45° for the same cost.

How much the creature can turn in any one space.

Related to the above. Good fliers are able to hover, and so their ability to turn in place is only limited by their movement speed. Average fliers are limited to a 90° turn in place (two 45° turns, at a cost of 10 ft. of movement), and will have to move forwards at least a little bit before they can turn again. Also, since they can't hover, they have to have maintained their minimum forward speed once all their turning is done, or else fall out of the sky.

Presumably, this turning limitation applies whether the first 45° was a turn after movement or a turn in place. This would be why Poor and Clumsy fliers are limited to 45° in one space: that's how much they're allowed to turn after movement, and they can't add a turn-in-place to that.

So, conclusions from the above rules...

Perfect manoeuvrability has no RAW limitations on turning. You can do a 1080° spin in your square for zero movement cost, if you want to.

At a cost of 5 ft. of movement for every 90°, a creature with Good manoeuvrability can complete an otherwise unlimited turn in place, giving them a turning radius of 0 ft.

If moving forwards instead of hovering (i.e. not using turn in place at all), they can turn sharply enough to do a complete 360° in four squares, making their turn radius 5 ft. in that case.

The tightest turn a creature with Average manoeuvrability can manage is a series of 45° turns in place, 5 ft. forwards movements, and 45° turns. (This also guarantees that they'll maintain their minimum forward speed, since it's 5 ft. of genuine movement for every 5 ft. of "lost" movement.)

Hence, they can manage a 90° turn for every 5 ft. of forwards movement, just like Good fliers, but at a total cost of 10 ft. of movement speed; their turn radius is 5 ft.

Without turn in place, an Average flier is reduced to exactly the same turning options as a Poor flier; see below.

A creature with Poor manoeuvrability cannot turn in place at all. For every 5 ft. of forwards movement, they can turn 45°, allowing them to do a complete 360° in a space 20 ft. wide: a turning radius of 10 ft.

Creatures with Clumsy manoeuvrability turn like those with Poor manoeuvrability, except that they need 10 ft. of forwards movement instead of 5 ft. They can manage to turn a complete 360° in a space 35 ft. wide, for a turning radius of 17.5 ft. 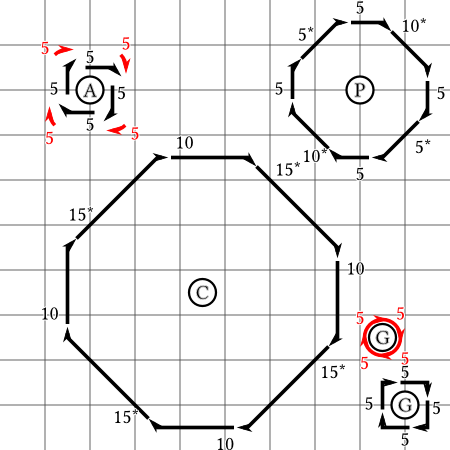 It turns out that the diagram from p.61 of the Draconomicon provides the answer to this question: 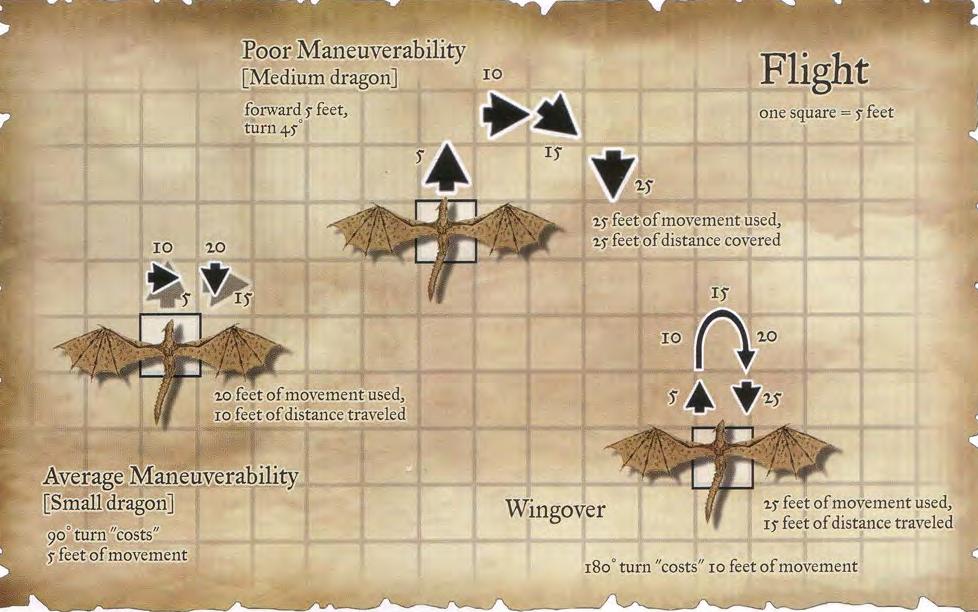 Not the answer you're looking for? Browse other questions tagged dnd-3.5e flight or ask your own question.

0
How does Wind Walk interact with combat?

9
Can a pixie fly higher than their altitude of one?
4
How far can an Aarakocra Totem Warrior Barbarian get a grappled target with flying?
7
If alter self is used to assume aquatic elf form, does the form get functioning gills?
3
What are racial bonus feats that are gained from polymorph?
3
Can a flying creature avoid falling damage by flying just before impact?
21
Does a creature in flight affected by the Haste spell fall when the spell ends?
2
Do the ball lightning and spark shower functions of a Ring of Shooting Stars allow saving throws?
2
Is it possible to escape from a Wall of Stone spell on the turn it is cast by flying?