Campaigns are unsatisfying when made-up or slow when pre-written. How do we fix that? [closed]

We have tried to get started playing D&D three times and each have not worked out how we hoped.

It seems like there's no way to make it work how we expect: be rewarding, fast, and engaging for everyone (including the DM). Pre-written campaigns are slow, and when the DM makes one up the players aren't satisfied by it in some way.

How do we fix this? Is that just a natural difference between how pre-written campaigns versus made-up ones go, and there's nothing to do about it? If it's not, how do we help our slow DM get faster with a pre-written campaign, and how does a DM make up a story that the players will enjoy?

Looking at your three examples:

There is no right way to play D&D!

The 5e DMG has some of the best advice on this on p. 6; read it in full and take it to heart. A summary:

The success of a D&D game hinges on your ability to entertain the other players at the game table. ... your role is to keep the players (and yourself) interested and immersed in the world you've created, and to let their characters do awesome things.

Knowing what your players enjoy most about the D&D game helps you create and run adventures that they will enjoy and remember. ... know which of the following activities each player in your group enjoys the most ...

Talk to each other about what each of you want out of a campaign. If you want you can even use something like the same page tool.

How does D&D work?

Luckily for you there D&D is really easy, how to play is on page 6 of the Players Handbook:

1. The DM describes the environment.

You have to know what it is!

There should be noting as a DM that surprises you except what the players do.

If you are using a published adventure you have to have read the module, preferably twice, and reread the bit where the PCs are up to just before you start playing. If it is your own material, you will spend more time preparing it and less time reviewing it.

For example, when I prepared to run Lost Mines of Phandelver I made this: 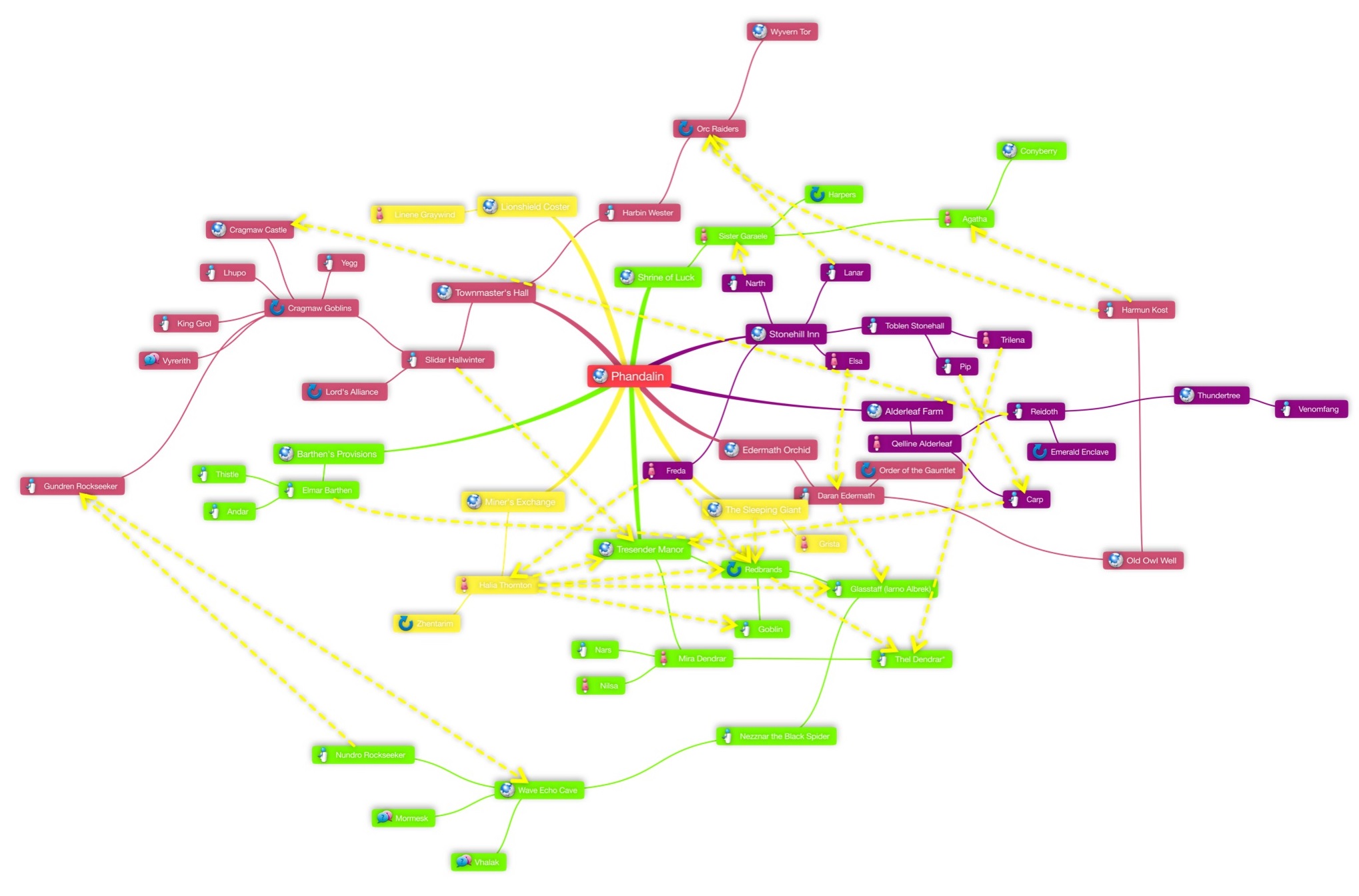 This is a mind map of the major NPCs, factions and places in the module showing how they were connected. I can look at this and know if they are talking to X then he is connected (in some way) with A, B, C & D - this is enough of a trigger (for me anyway) to allow me to remember what the NPC knows without having to thumb through the book.

You have to communicate it!

There is an inherent information imbalance in D&D: you have the information and the player's don't. You need to communicate succinctly the important information the players need to make informed decisions at both a tactical and strategic level. So, describe the things (people, places, traps, objects etc.) and let the players tell you what they want to do with them.

If, for example, your players aren't keen on acting then it is perfectly OK for them to arrive in town and you to say: "You spend the night in the inn. You meet George the barkeep, Natasha the half-elf Rogue, Fred the Fighter and Sam the dwarven cleric. George tells you about the mad necromancer out at the Old Owl Well, Natasha is looking for help clearing goblins out of some castle, Fred is looking to hire on and is keen for anything and Sam is having trouble with orcs.

2. The players describe what they want to do.

The need to know what the choices are: in combat this is easy because the rules limit them; in social interaction and the general "What do we do next?" situation you should have given them the information they need but not so much they can't see the forest for the trees.

It is perfectly OK if they are floundering to recap their options. For example: "You can:

3. The DM narrates the results of the adventurers’ actions.

The "Don't bore us, get to the chorus" rule aka the "Cut to the Chase" rule

D&D is about player decisions, its not about DM storytelling: if you want to tell a story, write a novel.

Decide does not (necessarily) mean roll

Only roll dice where there are consequences of failing: if the players want their character's to do something that is within their capabilities and they will succeed at eventually then they do it; if it is something they can't do then say "You can't do that, but if you did X or Y that may give you the result you want." This is necessary because of the information imbalance; in real life we get feedback that tells us if we will eventually succeed at a task, in a RPG the DM is the feedback.

In my experience, by the time a person takes the plunge and actually runs a campaign, they want to write their own stuff. The problem is that writing your own stuff is tough, and knowing what to focus on, and what your players want to focus on, and getting the pacing right, is impossible without running a few games.

Solution: The DM runs a smaller pre-made dungeon or adventure, and if that goes well, build it into a larger campaign of the DM's devising. A lot of DMs just link together multiple premade dungeons and microadventures into a larger campaign based around the characters themselves. This allows wiggle room for characters to go off and do unscripted things, developing their own stories, without requiring the GM to meticulously write out the stats of every beast inhabiting every dungeon the players find.

It's very simple to take a smaller premade scenario (the sleepy village of Murkbrook has an undead problem) and then change the climax of the premade adventure to be have a few hooks suggesting a larger problem (of the DM's own creation). Perhaps the necromancer that was causing the problem was carrying written instructions from a sinister cabal? Or a contract of employment from a nearby baron?

Helping a slow DM can involve keeping your characters simple (stick to the core rulebooks for now), hand waving things like AoE spells (does it matter so much if it hits four goblins or three? Does it matter enough to measure everything and sidetrack the game for 10 minutes?), and picking up their plot hooks, even if they're a little clumsy -

GM:"A shifty looking fellow beckons you into an alley. He wants you to follow him."

Basically a GM will always need to railroad the characters sometimes, and a newer GM might be more clumsy at it. A kind player that wants things to go smoothly will just go with it for the sake of the story, even if it's not ideal for their character.

Not the answer you're looking for? Browse other questions tagged dnd-5e new-players campaign-development new-gm or ask your own question.

42
How do I run a successful and engaging campaign without combat?
25
How do I convert traps from older modules to fit D&D 5e?
7
How do I get a fairly new player interested in playing longer adventures?
29
My players want a tighter narrative, but have wandered off course. What now?
26
As a player, how to engage new players more?
24
How to make sure the players escape but feel like it was because of their wit?
12
What would be required in order for a character to craft Potions of Invisibility?
10
Being an experienced player in a group of new ones