Are the mages from Three Shades of Night statted in the Chicago book too?

I read Three Shades of Night a very long time ago. Now I have learned that the vampire and werewolf characters are in World of Darkness: Chicago. Are the mages in there too? I tried to find the book or anything online but I can't seem to find anything even after searching. 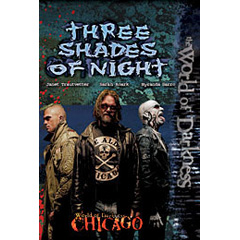 Mages mentioned briefly in the Three Shades of Night, or rather in the third novel "Shadows and Mirrors", and given stats in a Chicago book:

And that is all. Most of the recurring characters, such as Glorianna, Mercedes, Tiaret, Baihu, Gwyn or Nuad are not in the Chicago book.

I'm not 100% sure it's the same book, but looking at WoD:Chicago (same cover image); there is a mage section of the book starting on page 288.

There is a section starting on page 318 of the Chicago book giving stats for several Mage characters:

So there are a LOT of them. I haven't read Three Shades of Night but it seems likely the characters are somewhere in that list.

Not the answer you're looking for? Browse other questions tagged chronicles-of-darkness-1e or ask your own question.

9
What are the rules for combining multiple Fighting Styles?
11
Does it work to run a Changeling: the Lost game with players who don't know the game from the book?
24
In-game reason for no multiple supernatural templates in nWoD
4
Explaining the Wall Run merit from the Parkour merit tree
2
Are mortals from after the God-Machine rules update more powerful than before?
4
Which book is all about the Hosts?
4
Is there any way a mortal could see through “Cloak Of Night” (Obfuscate 3)
6
Can Cloak of the Night be used in combat?
11
How do all the World of Darkness and Chronicles of Darkness RPGs connect?