How can I prepare the map for a combat without alerting the players that combat is about to begin?

I am running an adventure in Pathfinder and I use a very large square board and some homemade model walls to define areas such as dungeons or houses and other stuff. However, building maps on the board every time someone explores a new place is really tiring for me and boring for the players.

It's especially boring when they just want to enter a house, or go to the blacksmith to buy some stuff, and leave. So I started building maps only during combat sections.

If I build one before the fight begins, that alerts them that there's about to be a fight, so to avoid that I have to build it right after the battle has started. But when I do that, my players whine that they didn't understand how the place was laid out and that they wouldn't have engaged in combat if they had known exactly where they were on the map.

How can I make sure everybody understands where they are and how a place is laid out, without asking them, while not alerting them of an impending battle?

I typically use non-combat mapping to help show the relative distances between things and the players. This is typically done using a "You are here" dot for the players and simple lines for relevant features. I even use notations on the map to denote distances given the map is often "not to scale".

This means that I still build for a combat, but the players already have a good idea of the size and spatial location before they choose to attack or whatever. 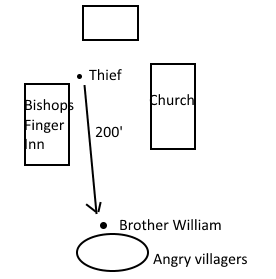 I recommend getting Paizos "Flip-Mat." They're $14 and can be used with dry erase or wet erase. Other similar products also exist, such as Battlemat by Chessex. You can also make your own using a sheet of acrylic from the hardware store and the patience to draw a 1" grid on it (on the underside, so you can draw scenes on the other). Ask the players to state where their characters are in a particular scene that you've described. If a battle ensues, draw the scene and have them place their minis where they previously described their locations. Occasionally have them tell you where their characters are, in detail, in a scene where there is no fight planned. This will keep them on their toes.

What I used to do:

My battlemap was one of the old ones that we marked on with water soluble markers and had a 1" square grid superimposed on it. The players' figures were always on the map whether there was anything going on or not.

When something arose that became a game scene, a quick sketch of the markers outlined where they were -- be it pub, throne room, path, road, forest, dungeon corridor, dungeon room -- and off we went as I placed whomever it was they met, and any 3-D props I was using. (Yes, Lincoln Logs make decent props).

You could do something similar with your board by covering it in clear shelf paper. Sketch things in as needed, then add the props as the battle proceeds into the first round to flesh out the detail of the battle scene sketch you made quickly.

What a friend of mine did as DM:

He used a cardboard pattern sewing cutting board with 1" x 1" grid -- he got it at a craft shop. (It's for people who sew their own clothes). Cover it with clear shelf paper. It is a pencil friendly, or a water soluble friendly, grid for general use. Add props as above after the quick sketch in the scene of action. This may seem like a low rent version of your board but it was very handy, and portable!

Players who whine? Beyond the scope of this answer.

There are two situations:

Situation 1: When the players initiate combat

When the players are thinking about starting a fight they can state something like:

PC: I survey the area to assess our tactical position.

At that point you can draw/build/setup your combat map. When the players can view the map they can still decide that combat would be a foolish choice the NPCs will most of the time react without knowing that the players contemplated a direct attack.

You can even make the accuracy of the initial map depending on a skill check (e.g. perception, knowledge dungeoneering, or profession soldier): on success you draw an accurate initial map, on failure the map you initially draw misses some vital details that the PC overlooked.

When the players ask for maps in situations where they would easily murder the NPC(s) and you don't want to draw a map you can tell them that the situation looks like they have overwhelming tactical advantage and if they decide to fight they will easily win and can murder the NPCs should they want to.

Situation 2: When the enemies initiate combat

In this situation the players should not whine about not having engaged in combat would they have known the situation, since its not the PCs deciding to start combat.

When the map is drawn the PCs can still decide to try to escape as quickly as they can.

Sometimes you as a GM can decide to draw a combat map before the combat has started; e.g.:

GM: "When you enter the room, you immediately feel the tension of the situation. A quick scan reveals the following situation:"

GM: "However, the others keep their swords sheathed. What do you do?"

This will immediately convey the feeling to the players that combat is imminent and only cleverness or good diplomacy will allow them to avoid it; here we use unavoidable metagaming to enhance the atmosphere.

Extra 2: Not drawing a map even when a player requests it

In some situations the PCs are such an overwhelming force that you as GM hadn't even considered that the players would decide to fight (even taking into account that they are a bunch of murderous cretins ;) ).

Instead of having to come up with a map and draw it, you can tell the PCs that their assement of the situation is that they would easily 'win' any fight and that they would be able to "murder" the NPCs without any problems if they so choose.

Ofcouse, you should keep your promise (at least most of the time, there might be a failed skill check or some deception by the NPCs in play).

Sometimes draw a map but for different reasons: traps, decision making ("do you go left or right, given this is what you see?"), just because it helps your description. Then mix it up when you do/don't have a fight.

I would not worry about it too much unless it really needs to be a surprise, in which case start the fight just before you draw the map. E.g. "You walk round the corner into the empty square. As you said, you check it out (perception rolls, but not good enough) and sit and open your rations. Farfgnar, you take a bite out of your ham, when a crossbow bolt suddenly appears through it, barely missing your face. Roll initiative as more crossbow bolts fly down from the windows above" THEN draw the map.

Of course you should mostly allow them the perception rolls to notice what's going on it depends on the circumstances) but you can draw the map just after it becomes evident that they are in trouble. Often I roll perception rolls for them, but I would imagine some groups would be happier rolling some perception rolls before play begins and give them to you to use as you needed without them knowing what was going on.

Not the answer you're looking for? Browse other questions tagged pathfinder-1e gm-techniques battle-map metagaming or ask your own question.

2
When should i reveal new sections of a dungeon?

9
What are good techniques to adapt module maps to 3D terrain and/or 2D tilesets?
6
Tips for creating engaging modern setting battle maps?
4
How do I avoid placing useless battle grid features?
8
When players have settled into “routines” for runs, how to break them out of the rut?
48
I want to run vast and realistic dungeons, but my players get frustrated trying to search every room
8
How do you represent sloping topography on a battle mat?
5
Can the Lyre of building be used to work a quarry or to fell trees?
11
Does Mindless limit my minions' ability to help build our kingdom?
2
How, as a Pathfinder DM, can I help my players create characters at the correct optimization level for a given adventure?
13
How can I show the effects of illusions in Roll20?