How does Wall of Fire react in a tunnel system?

We came across an issue in our game last night. We were ambushed in a system of tunnels and chambers, with monsters approaching from two directions.

The druid wanted to cast a Wall of Fire in a 30 ft circle around the party to give us time to think (and do some damage, hopefully, to anything approaching).

The problem is, how would this work within the cave system, as there isn't a 30ft clear space. See pic below: 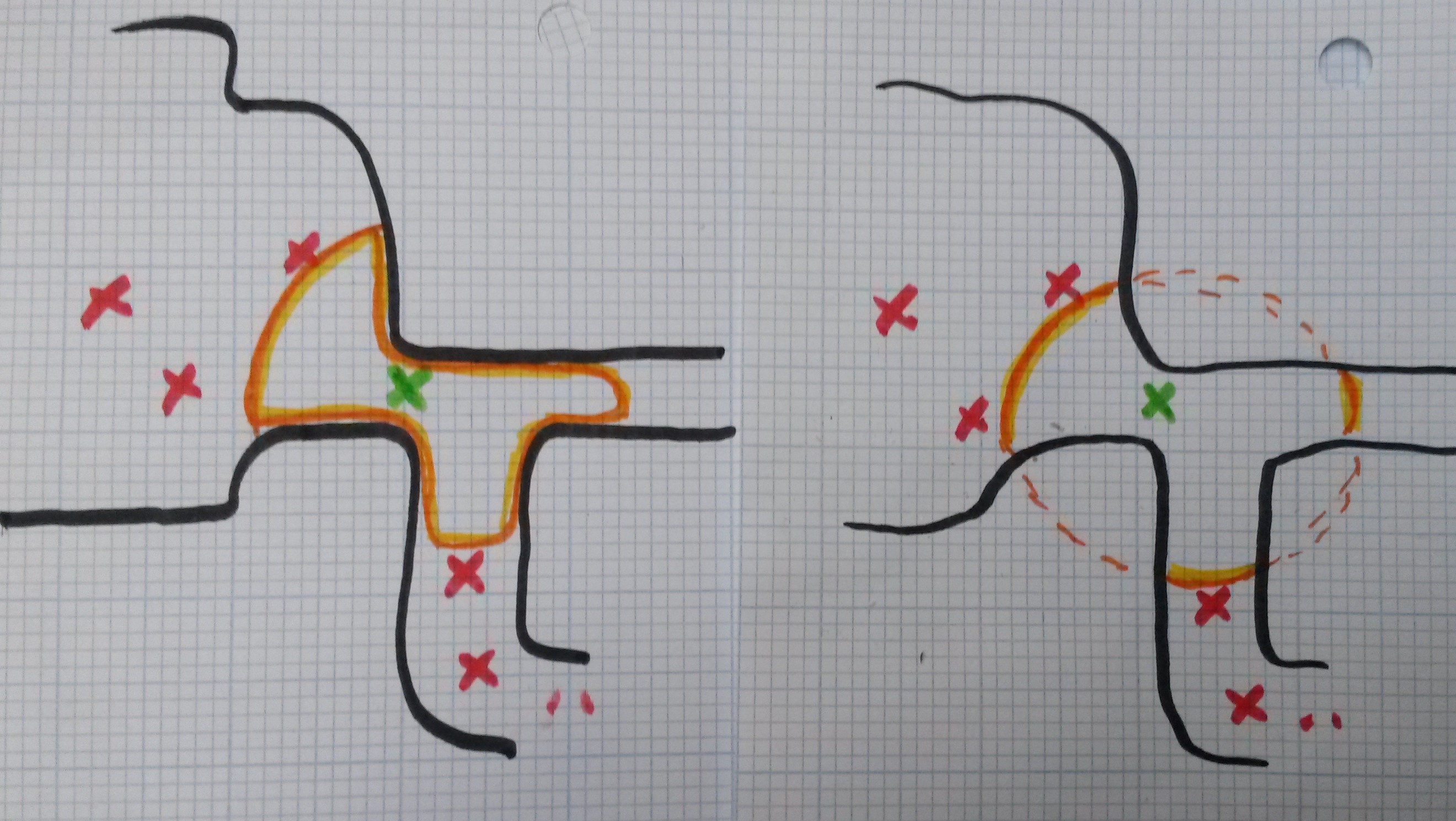 Sorry for the sketchy quality, I'm drawing it from memory. Party is at the green cross, mobs are red crosses ahead of us and behind. Yellow/orange line is the Wall of Fire.

In the first pic, the WoF is a circle 30' diameter, but has been squeezed (like a bubble) into the space, so it lines the walls of the cavern. If the druid moved forwards, the WoF would squeeze out into the main chamber. If this is the case, should the enclosed area remain constant? (ie. in this image, it should be squeezed out further along the narrow tunnels and a little further out into the room? This would be consistent with the idea of a squeezed bubble...)

In the second pic, the WoF is a constant diameter ring, but only appears in the open spaces, ie. it just disappears inside the walls. OR, does it not disappear inside the walls? So if there was a secret room just to the top right of this map, would it be affected by the fire?

OR, final option that was presented (by the GM) the spell just fails if there isn't enough open space for it to be cast. The party didn't like this option, needless to say, because it seems to bring up future issues if we state we're not able to cast a spell at all if the area is too small.

The GM wasn't happy with either of these, so we didn't use the spell in the end.

For both scenarios, it helped me to think about what would happen if the druid cast the Wall in the open, and then walked towards a stone wall.

The first image/scenario has no precedent for occurring. The Wall can be a sheet or a ring, not an amorphous blob, at least without some other influence. If the tunnel walls somehow repelled magic without negating it, this could probably occur, since the Wall is a magical fire. But this wouldn't happen just by casting the spell as is.

The second image/scenario is more likely to actually occur. Remember that this is a magical fire. Does magical fire need oxygen? That's worthy of a discussion with your DM. If it doesn't, then the magical ring of fire goes on burning regardless of the material it's in. If it does need oxygen, then it's definitely not burning inside the walls, but does the spell still exist while it's in there? Again, this is up to your DM. I would rule that if you can't keep the ring in one piece, the wall disperses. It seems reasonable for a single break in the ring to allow the spell to continue, as when you walk up to a stone wall, but once the ring is in two piece, the spell ends. Based on this argument, I agree with your DM--since the ring isn't contiguous from the start, the spell fails.

The session is over, but there is a way to work within your DM's ruling--cast the Wall as a sheet rather than a ring. Either pick one group of enemies to seal off, or retreat down the third, seemingly open tunnel and send the wall up in the opening.

The wall of fire should be a ring around the party. It shouldn't go into "secret" rooms that you are unaware of, only places that you know about.

I would GM it the second way. You really do not want to get into distorting spell effect areas with natural terrain as that will be a constant problem and exploit.

My personal opinion is that either of the drawn methods should be allowed. One style should be considered default; to cast the other style you must specify in advance. This will help prevent "the monster moves here" "but wait, I meant to have a fire wall there!" arguments. I wouldn't allow the fire wall to pass into non-visible areas. It's been a long time since I've looked at a D&D rulebook, but here are some things I vaguely remember or looked up:

Personally, I wouldn't use the auto-fizzle options. Just seems really annoying to be unable to maintain a firewall because one little slab of rock got in the way. At the end of the day though, the important thing is that the GM picks something and sticks with it for consistency.

I have a hard time imagining how the caster shapes the irregular wall in his mind, adjusting it correctly inch by inch while walking.

I assume the casting process is more like generating a wheel with spokes - the magic reaches out from the center, but magic is not blocked like line of sight. The spokes, once created, make sure that the ring moves with the caster.

The spokes at their tip generate initial heat, fuel and oxygen and so create the fire. The spokes are basically tubes transporting the magical energy to their destination, where the end product combusts - much like a neverending ring of sparklers.

Of course, this is just my personal concept.

I agree: option #2 is the most efficient. You also need to remember that your ruling here will apply to all similar situations in the future.

As for secret rooms, the 'concentration' mechanic is handled two different ways depending on what spell you cast.

If the effect is truly static (meaning you have no fine control over it) and you are essentially projecting outward to a given radius, then it doesn't matter whether you know the secret room is there or not. Just like it doesn't matter if you know an invisible creature is sneaking up on you. It still gets burned.

Alternately you could use the line-of-sight mechanic to resolve this issue. Many spells require you to be able to perceive an opponent to target them with a spell. You also need to be able to perceive (or at least be actively aware of) the "area" your ongoing effect will manifest in for it to do so. The idea is that when you manifest the spell you are mentally deciding (within the limitations of the spell) where to manifest it. So if you don't know to manifest it there, you can't do it.

That's why dropping a level 1 fog cloud on your team to stop Joe Necromancer from targeting and wasting your cleric with power word: kill works. Unless the necromancer is blind or has some other weird "primary" sense that he's using to target with.

I just confused myself. =\

Not having an AD&D rule book handy to peruse -- and using MichealS's rules description, I would have said Option #1 was the best fit for the RAW description...a ring around the caster, which could follow the caster. This would follow the assumption that the ring must be unbroken.

However, Option #2, could be viable if you don't assume an unbroken ring -- though, I would, not assume fire burns in rock. As you move, more or less of the sphere would appear.

Both of these, I would say are viable, assuming the radius does not exceed the spell's radius.

I would not have Option #2 expand into amorphous blobs though.

As for secret areas, well, I would say -- probably not...you don't know they exist, so how could you concentrate on that.

Not the answer you're looking for? Browse other questions tagged spells adnd-1e or ask your own question.

10
Ringed Wall of Fire: How does the damage sequence go?
21
How does the area of effect of a fireball cast in a corridor or small room work?
21
Is Wall of Force a one shot kill?
14
Can I squish people with a wall of force?
5
How much of a person or object must cross an extra-dimensional space's interface from inside, in order to attack a target outside of said space?
20
Can a portable hole be used to get around the 10' movement restriction on Glyph of Warding?
26
Can objects with a spell effect pass through Leomund's Tiny Hut?
7
Does an object count as “being moved” when placed in a Bag of Holding before its wielder moves, and then after moving they take the object out again?
11
Is this homebrew variant of Leomund's Tiny Hut a problem?
8
Engulfed while Gust of Wind is in effect