How does crafting poisons work?

So I have been playing D&D for some while now, since 3.5 (skipped 4e) and crafting in D&D has always been something I detest as its REALLY poorly handled in my opinion as a game designer myself.

I am currently DMing a game and one of my PCs is a rogue who has a poisoners kit and wants to develop poisons to coat his weapons. I can easily homebrew some stuff up if needed. But I was curious if there was anything in RAW (either DMG or PHB) that states what it takes to actually create your own poisons, and what poisons a player can create. Page numbers to support claims is highly preferred. I have looked through the books but was unable to find anything substantial except for the Poisoners Kit which says something along the lines of "Allows the Player to create poisons".

If there are no RAW solutions to this problem I have something in my back pocket for it so that isn't really what I am looking for.

The DMG pp. 257-258 has a bit of what you're looking for: descriptions of fourteen sample poisons, with damages and costs. A few individual descriptions contain enough detail to make (some) ingredients obvious--see Carrion Crawler Mucus and Serpent Venom, for example.

As for crafting poison...

During downtime between adventures a character can use the crafting rules in the Player's Handbook to create basic poison if the character has proficiency with a poisoner's kit. At your discretion the character can create other kinds of poison. Not all poison ingredients are available for purchase, and tracking down certain ingredients might form the basis of an entire adventure. (DMG p.258, emphasis mine)

Even combined with the PHB Poisoner's Kit (p.154: "Proficiency with this kit lets you add your proficiency bonus to any ability checks you make to craft or use poisons.") and Crafting (p.187) sections, there's not much here to go on. Combining all three sources could go something like this:

I think that's all the rules have got for you.

And here's my bonus inspiration for GMs that read this far: the bottle of 'wine' I saw at my doctor's office this afternoon... 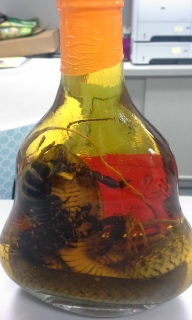 Yes, that's a bottle of wine with an entire cobra in it. And yes, in the cobra's mouth is a whole scorpion.

By RAW: No. They didn't provide a crafting table for poisons in either book.

There are two things poisoning does. Apply the poisoned condition, which puts enemies at a disadvantage on the attack, or deal damage such as a green dragon/poison spray spell. It doesn't appear to be evident that you can deal poison damage and also the condition at the same time.

So, like all of the crafting in 5e, this is left completely up to DM discretion.

As for the pros, it leaves decisions on what to do with poison completely up to the player and DM collaborative process. For example, what if I wanted to create a poison that could charm people? Or a poison that makes somebody extremely talkative and cooperative? Or even a poison that changes a person's skin colour to bright blue?

Xanathar's Guide to Everything had some rules for creating the various healing potions. I'd suggest that you could look at the time and costs for poisons and reverse engineer the time based on that rule and add in harvesting (if desired) based on the rarity of the type of poison being made.

For an example, suppose a player's Drow Rogue wants to create their own Drow poison. The stuff lists as selling for 200 gp. Since the actual cost used for crafted items is 1/2 of the list price, 100 gp is the target cost which is the same as a Superior Healing potion, so I'd rule it to take the same time of 1 work-week at a total expense to create of 100 gp. For another example, Purple Worm poison would cost half of the listed 2000 gp, putting it equal to a Superior Healing potion at a 1000 gp expense and 3 work-weeks to complete.

I cannot say this is official canon and such, but with the lack of exacting rules it seems like a reasonable application for modifying a similar process. Also, while 3 weeks may not seem very long to create such a potent poison, it's always possible to further restrict creating such items based upon the rarity of the original venom from a Purple Worm being available or not.

i am starting my poisoner off with this info. the link is nice because it offers simple harvesting mechanics as well as simple crafting mechanics for poisons that shouldnt cost hundreds of gp and take days to make. just simple little stuff. i dont like the duration on this page, because if it lasts for an hour it lasts for an hour, i don't know why combat would shorten that (especially if you designed an applicator quiver (arrows or bolts held tip down in a damp cloth soaked with the poison) or something like that)

13
Are there non-magical utility arrows?
7
Where are the rules on poisons?
9
Extracted poison off an enemy creature. How does one use it?
3
What is the rarity of poisons within the DMG?
-1
Can you harvest the poison from a ghoul?

10
How are poisons modelled?
5
How does "stacking" poisons affect the poison save DC?
3
Rules for creating new poisons
12
When Silent Image Is Disbelieved, Is It Transparent?
2
Does a magic hand keep a demon from vanishing?
3
What is the rarity of poisons within the DMG?
3
How does consumables batch crafting work in Pathfinder Society?
26
Why Do We Keep Adventuring?
7
Can I use Basic Poison on an arrow with this Venomous Bow magic item to create a double-poisoned arrow?