Do I get all my damage bonuses with the second part of Flaming Sphere?

I recently used a Wizard(Mage) in a level 14 one-shot. I used the daily power Flaming Sphere and when I went to roll the secondary d4 + damage I assumed all my bonuses would be included. 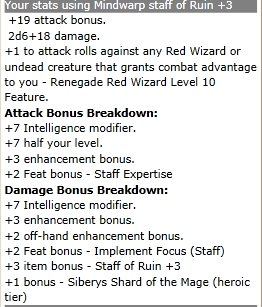 I was told that only my Int modifier is added because I wasn't making an attack roll which, from my understanding, attack rolls and damage rolls are two totally different categories and in turn have different bonuses. Don't the same bonuses applied to the initial attack get added to the secondary trigger damage as well? Thanks in advance if you can clear this up.

The damage bonus breakdown listed on the Character Builder is indeed for the "attack" portion of the power. There are some of those bonus that can be added to the 1d4+int damage portion. So, let's go by parts.

This power have the Implement keyword. As such, it states the following:

If you wield a magic implement, you can add its enhancement bonus to the attack rolls and the damage rolls of implement powers you use through it.

The secondary effect of Flaming sphere involve you rolling dice for damage (1d4), and thus, benefits from the enhancement bonus of your implement.

The damage listed as "off-hand implement" bonus I assume is because of the Dual Implement Spellcaster feat, that also says the following:

(...) you can add the off-hand implement’s enhancement bonus to damage rolls.

Since we already stated that it is a damage roll, then you also add the benefits of this feat into the 1d4 damage of Flaming Sphere.

The feat Implement Focus similarly, also gets added for the same reason.

You gain a +1 feat bonus to the damage rolls of implement attacks that you make with the chosen implement.

Ditto for the Staff of Ruin property, as long as you used it as your main implement.

Whenever you make an attack using this staff, you gain an item bonus to the attack’s damage rolls equal to the staff’s enhancement bonus.

And as you can expect, the Siberys Shard of the Mage also get added to the list.

You gain a +1 bonus to damage rolls with implement attacks that use the augmented weapon.

So considering the sources of your extra damage, all of them get added to the secondary damage of Flaming Sphere, and you deal 1d4+18 damage to any creature that starts adjacent to the sphere.

"But you said some bonus would not apply, and ended up with all applying..."

Being more specific, any bonus that you have that apply on a hit will not work with the 1d4 portion of the Flaming Sphere for the simple reason that you did not made an attack roll. One example would be the feat Consuming the Weak, that requires you to hit with a Fire power. Flaming Sphere have the Fire keyword, but only benefit from this feat when you made the attack portion of the power, not the automatic damage for standing nearby.

And just as a final note, NONE of those bonus would be added to a power that do not roll for damage, like Beguiling Strands, even thought this power would add anything that gets added on a hit (because the power makes an attack roll).

Not the answer you're looking for? Browse other questions tagged dnd-4e powers or ask your own question.

8
Does the damage caused by Wall of Fire get the implement bonus when a creature walks into it?
8
Does a Flaming Sphere gain combat advantage with its initial attack against a prone enemy?
3
How does the Magic Staff (from the Handbook) work?
0
Hybrid fighter|ranger rules questions
3
Theme, School and Feat damage for Conjurations and Summonings?
4
How do magic weapons affect attack and damage rolls for weapon or implement powers?
0
What damage bonuses apply to Come and Get It?
2
Can I sustain Weapon of the Astral Flame twice and get two attacks with it?
5
Does having two sources of damage in one attack count as two damage rolls?
2
Does “Ability modifier damage” always include all bonuses?