How strong is the Spider Climb force (against rushing water)

If the climb example would involve a DC increase, would that mean the spider climbing char does not need to roll:

furthermore, it need not make Climb checks to traverse a vertical or horizontal surface

Would indicate that the climb would not need to roll, except I saw this question "Alternative uses of Spider Climb" Which seemed to indicate that part is just a badly worded version of:

A creature with a climb speed has a +8 racial bonus on all Climb checks. The creature must make a Climb check to climb any wall or slope with a DC higher than 0, but it always can choose to take 10, even if rushed or threatened while climbing. If a creature with a climb speed chooses an accelerated climb (see above), it moves at double its climb speed (or at its land speed, whichever is slower) and makes a single Climb check at a -5 penalty. Such a creature retains its Dexterity bonus to Armor Class (if any) while climbing, and opponents get no special bonus to their attacks against it. It cannot, however, use the run action while climbing.

Thus the spider climb spell was a simplified version of having a climb speed (so you could climb any walls without caring about your climb score (otherwise you'd need points in climb, as you could just take 10 + 8 racial bonus))

Note: While I am looking for RAW, I don't expect this case to be covered. Thus house-rules, or RAI "fixups" are fine too.

Anaruoch: The Empire of Shade includes a 50-ft.-tall, 10-ft.-wide waterfall inside a cavern. Features of the Area describes the waterfall as follows: 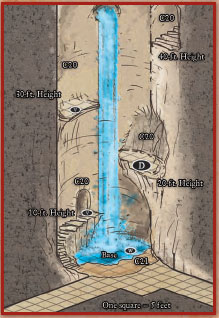 Extrapolating from this, a creature that wants not to be swept away when confronted with a suddenly flooding passageway should probably allowed to make a Strength check (DC 20) if the creature has means of going against the deluge in the first place (e.g. appropriate handholds, a fly speed, an active effect like the spell spider climb, extreme weight due to the spell iron body). That is, effectively the creature has chosen to try to stay in place while the waterfall flows over the creature. Success means the creature can take its actions normally; I suggest failure means the creature's swept away (rather than having the creature plummet).

After a successful Strength check made to avoid being swept away, forward progress against this ersatz waterfall should require a climbing creature to make Climb skill checks (DC 35). (Note: While neither hydrologist nor spider-eating spelunker, I think that DC's about right considering the potential water speeds were discussing. I don't know if matters if failure means you technically fall or, instead, are technically swept away as both involve facing tons of water coming right at you! I'm guessing, but at this point traversing the horizontal seems like it should be as difficult as traversing the vertical. Comments can take up this issue, and, of course, the DM can adjust the DC as he sees fit.)

How other creatures make forward progress is up to the DM, but flying creatures likely must swim (perhaps in stormy waters), and super heavy creatures likely use their land speed (albeit maybe vastly reduced—this is, after all, pretty difficult terrain). All such creatures probably also need to hold their breath.

After a failed Strength check, the creature's swept away. Aquatic Terrain under Flowing Water describes being swept away as follows:

Characters swept away by a river moving 60 feet per round or faster must make DC 20 Swim checks every round to avoid going under. If a character gets a check result of 5 or more over the minimum necessary, he arrests his motion by catching a rock, tree limb, or bottom snag—he is no longer being carried along by the flow of the water. Escaping the rapids by reaching the bank requires three DC 20 Swim checks in a row. Characters arrested by a rock, limb, or snag can’t escape under their own power unless they strike out into the water and attempt to swim their way clear. Other characters can rescue them as if they were trapped in quicksand (described in Marsh Terrain, above).

Emphasis mine, and which should cover equally well a rapidly flooding cavern.

Spider Climb lets you climb upside down on the ceiling. That's a pretty strong effect, and not one that you can replicate with just "+8 to your roll and you can take 10" from the climb speed. I think the text "need not make Climb checks to traverse a vertical or horizontal surface" should be interpreted literally. (In fact I think RAW means we're required to interpret the rules literally?)

If the character is hit by a brief stream of water, I might treat it like Gust of Wind: make a Fortitude save or get blown/washed off the wall. (The Gust of Wind spell has various levels of badness depending on how large you are; different volumes of water might generate different effects on Medium-size creatures.) Characters with a particularly good grip, for example from the Spider Climb spell, might get a bonus on their save. It's a bit odd to ask for a Climb check unless the character is actively trying to move while getting hit with water.

If the character is actively trying to move while getting hit with water, then yeah, I think you have to ask for a Climb check with a higher DC. If they're Spider Climbing, they get this for free. If you want to represent that they're still in danger of being washed off the wall, you can start asking for Fortitude saves every round.

If it's a lot of water, you might need to look at the swimming rules. Swimming in fast-moving water deals you 1d3 nonlethal damage per round, even if you make all your checks. (Presumably that's just from being buffeted by the water?) A character under a waterfall might suffer something similar.

Not the answer you're looking for? Browse other questions tagged dnd-3.5e spells or ask your own question.

3
Alternative uses of Spider Climb
4
What's the DC for climbing against a current of flooding water?