Ogre CR calculation: is it wrong or am I missing something?

My question is about the basic ogre CR calculation in the monster manual, which doesn't make senses to me. I tried to make a concept of an "armored ogre" with chain mail and pikes (AC 16 and 15 (2d10+4) damage).

The problem comes when I recalculate its CR and it's exactly 2, just like the ogre. That seems odd to me because it's suppose to be a deadlier encounter! So I tried to calculate the base ogre CR.

I must be missing something because the ogre doesn't have any special defences or anything and when I calculate his CR with the Dungeon master's guide I end up with a result of 1.

His damage rating CR is 1, but he has 2 points more attack than the suggested for his CR, so he has an effective attack CR of 2.

The important bit for your question is:

For example, an ogre is worth 450 XP and is a CR 2 threat. A party of five 1st-level characters should expect to face about 500 XP worth of monsters for a challenging fight. Sounds like the ogre is a good fit, right?

However, the ogre is a CR 2 creature because its damage is enough to drop most 1st-level characters in a single hit. That doesn't mean you shouldn't ever throw an ogre at a 1st-level party. (One of the most memorable games I played in featured a running battle between 1st-level characters and an ogre.) But it does mean you should be ready for a tough fight—one that requires a mix of good luck and smart play for the heroes to emerge victorious.

So the answer to your question is that the Ogre's CR is 2 because it is capable of killing a level 1 character in a single hit.

Your calculations are correct except that the average of 2 and 1/4 is 1 1/8 which still rounds to 1.

Creating a monster isn't just a number-crunching exercise. The guidelines in this chapter can help you create monsters, but the only way to know whether a monster is fun is to playtest it. After seeing your monster in action, you might want to adjust the challenge rating up or down based on your experiences.

I submit that play testing drove the CR up a notch. If you have made a modified ogre that is 1 CR higher than the calculation for the base ogre then it is probably a CR3 monster.

I can explain what you're missing. I wish there was a tl;dr, but CR is a complicated topic and while the problem you are having is not unusual, addressing it requires a great deal of exposition.

The DMG's process for developing a creature is not what defines the CR of a creature. DMG p.237 clearly states that determining CR is not merely a mathematical formula. The numeric calculation are a starting point. The actual definition of CR is in the Monster Manual (p.9). To paraphrase, a creature with a CR of X means that 4 appropriately equipped, well-rested adventurers of level X can face the creature in combat without a death.

So you do the math, then the next step is to compare the creature to PCs and determine the maximum level that PCs would have to be to face the creature in combat without reasonably expecting a death.

So looking at the Monster Manual version of the an ogre it is pretty clear that 4 1st level characters are very likely to have a death when facing the ogre. His damage (2d8+4) is going to render every 1st level PCs except a barbarian or a D10 class with a 16 Constitution unconscious with a single hit. And a high damage roll, or a crit, will kill most first level PCs in a single hit. Further, 1st level characters don't have the damage dealing abilities to deal 59 points of damage quickly. A first level PC's average damage is somewhere in the 7-8 hit point range. So they are looking at 8ish hits to take an ogre down. So it is clear that 4 1st level PCs are probably going to experience a death when facing an ogre.

So on to your situation. Having done the math, you arrive at a CR2 for your new "armored ogre". That is the first step. You have to determine if 4 appropriately equipped, well-rested 2nd level characters facing your armored ogre in combat are likely to suffer a death, and if so, you need to raise the CR. There are multiple ways to do this. You can use a qualitative approach as I did in the previous paragraph. Or you can recruit some players to pit 4 2nd level PCs against the armored ogre to see the results. Or you can pull down some pregen 2nd level characters and shadowbox it with you playing the PCs and the ogre. Or you compare your armored ogre to other CR2 & CR3 creatures to decide. How does he look compared to a bandit captain or veteran?

Because CR is complicated and such a common problem, I put together a FAQ video which may help: CR FAQ

Also, here is an example where I'm building a CR2 Death cleric, which may help: 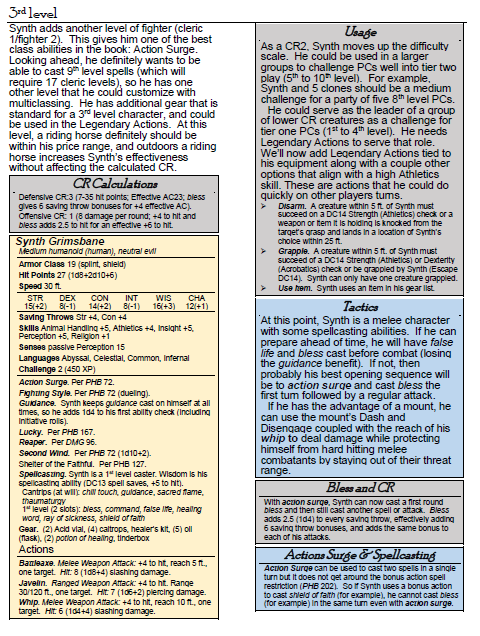 The ogres challenge rating is 2 cause 1½ challenge rating doesn't exist, and your calculations are based off the monsters average hp and damage your not using the max it seems to create it cause if so you realize your monster is actually a 3cr here's how

Start with the creatures max damage per round this determines the initial cr (2d10+4) max: 24 = cr 3

Not the answer you're looking for? Browse other questions tagged dnd-5e monsters encounters cr-calculation or ask your own question.

2
Are creatures attack stats based on attributes / proficiency?
2
CR calculation for monsters at low level in D&D 5e
24
Are the monsters in the MM actually following the monster creation rules?
9
Goblin's Challenge Rating and Nimble Escape
8
The CR of a Dragon
8
Is the official Necromancer NPC’s CR calculation accurate?
6
How to Calculate Effect of Luring Song on CR?
2
What is the best way to modify existing creatures to make new ones?
6
How do you determine hit points in 5e for custom monsters?
7
Reverse engineering the Hydra CR
See more linked questions

6
How do I calculate the CR of a monster that spends their turns healing?
2
What does the DMG mean by 'points' in monster building?
9
Is the Imentesh Protean missing something?
5
Is this conversion of a Cloud Ray Elder CR 16?
8
Is the official Necromancer NPC’s CR calculation accurate?
12
How can I make this homebrew Elder Aboleth the CR rating I want it to be?