What is the history of the term "Dungeon Master's Screen"?

The question What's the name of cardboard wall DMs use to hide their part of table? has a fairly clearcut answer--"X Master's Screen," where X is "Game" or "Dungeon" depending on the speaker, the game being played, and possibly other regional and/or cultural factors.

The Wikipedia article on the subject linked from the other question gives a quick history of TSR products called "Dungeon Masters/Master's Screen"s, from the late '70s onwards. The first such made by TSR was released with, or shortly after, the first Advanced Dungeons and Dragons (often retconned as "D&D 1e") books. I started playing tabletop RPGs around that time, and I remember the product having, on the DM side, a straightforward reprinting of a number of useful tables selected from the Player's Handbook and the Dungeon Master's Guide but mostly from the latter. I also clearly remember the art on the "outside" facing the players of the edition of the screen I saw most often--the fat, grinning demonic idol also pictured on the cover of the first few printings of the AD&D Player's Handbook: 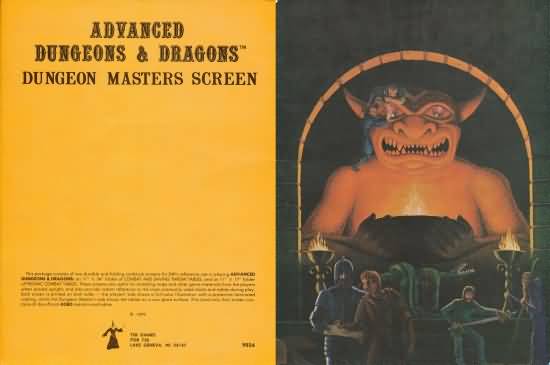 I'm calling attention to the art here just because it may jog others' memories. I'm interested in knowing whether TSR coined the term "DM's Screen," which then (at least in my gaming circles, for what it's worth) became a universal term for that accessory, regardless of what game system was actually being played. Or were there already similar products from other publishers on the market (or were people making homebrew versions) and TSR just used the prevailing jargon?

The Judge's Shield (1977) predates the Dungeon Master's Screen by about two years, give or take some months. (That the Judge's Guild got to this first is not surprising, as Gygax infamously told them that nothing but rules would sell, and the Judge's Guild was fated to prove him wrong.) So the term ŌĆ£shieldŌĆØ was established before the term ŌĆ£screenŌĆØ, and still has minority currency today.

The Referee Screen (1979) for Traveller has the same vintage as the DM's Screen and is the only other data point before the 80s begin. It's unclear which was published first that year and therefore which one coined the term ŌĆ£screenŌĆØ, but together with their two popular gamesŌĆēŌĆöŌĆŖD&D and TravellerŌĆēŌĆöŌĆŖthey certainly had a large enough combined audience to establish the term ŌĆ£screenŌĆØ in common usage over the the term ŌĆ£shieldŌĆØ, and likely TSR's audience alone would have been enough to establish the term as definitive. (Judge's Guild material, although designed for use with D&D and acclaimed at the time, was not ŌĆ£officialŌĆØ and that would have prevented a lot of play groups that didn't stray from TSR-branded material from being exposed to the alternate term.)

The history isn't very interesting, unfortunately. The only reason we have more than one word for it is because ŌĆ£shieldŌĆØ enjoyed first-to-market advantage in establishing mindshare enough to not be completely destroyed by the TSR juggernaut's adoption and promulgation of the term ŌĆ£screen.ŌĆØ

The ŌĆ£GM ScreenŌĆØ variation, as noted in the other question's answer, is merely a variation of the term that follows the separate trend of the hobby adopting ŌĆ£game masterŌĆØ as a non-trademarked, non-D&D-specific term, whether out of a hobbyist's need for precision or a publisher' need to avoid legal trouble. The term ŌĆ£GM screenŌĆØ therefore doesn't have much of an interesting history of its own. You can see ŌĆ£GM screensŌĆØ in a few early items:

Before computers co-opted "screen" for their monitors, it meant a folding separator made out of panels. 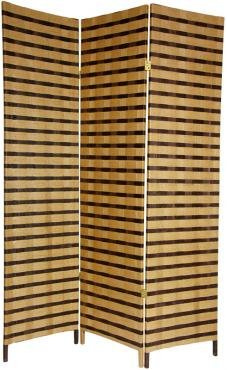 The DM's screen is a folding separator made out of panelsŌĆöcardboard, not wood, but same purpose and general construction.

Not the answer you're looking for? Browse other questions tagged history-of-gaming terminology .

21
What's the name of cardboard wall DMs use to hide their part of table?