This issue came up when the party's warlock cast Hunger of Hadar upon some enemies. She argued that because they were within magical darkness, and blinded, that they should not be able to immediately run out of the spells area of effect without having to make some form of a check to know where they were going.

What are the rules for moving when you can't see? Should an enemy be able to just walk out of magical darkness, or should there be a check that needs to be made? Visual below: 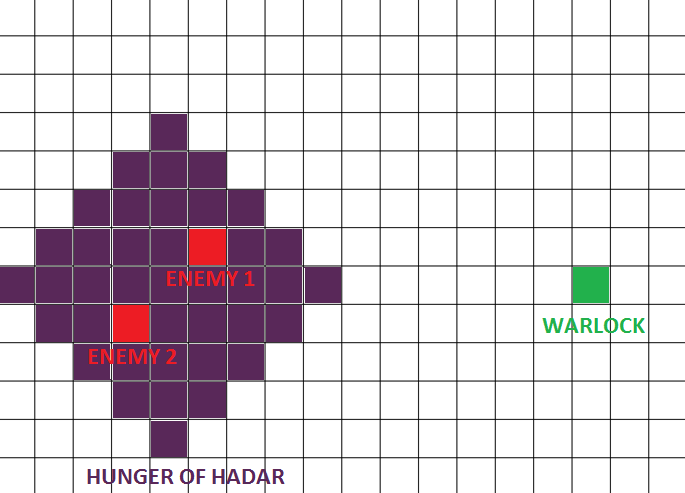 Should they just be allowed to run towards her, or at least be able to escape? Or should they have to bumble around in the dark in order to try to get out, with ENEMY 1 potentially walking away from the Warlock in difficult terrain, thus being trapped in the spell for another round?

In the meantime, for less wise enemies, we would roll a d8 and they would walk in the direction that they rolled. Until I find more definitive ruling, we were thinking about the enemy having to make a survival check/wisdom saving throw opposed to the Warlock's spell save DC, and imposing the d8 random movement if they fail.

Apply common sense for the enemies.

In any case, try to RP the NPCs acting in a believable manner according to their personality. They might not know the shortest path out of the darkness. Some NPCs could be clever, and other could make bad calls.

If a GM wants to leave this to randomness, then I would suggest an INT or WIS check depending on what the enemy is trying to figure out, but in general it is not required for the GM to roll for this. In case you do want to roll:

That really depends on which direction the enemies are facing at the time the spell as cast, and whether or not they're aware of your party's presence.. If the spell is cast and the enemies are facing your party, they already know the direction that they have to run in order to reach you. However, if you cast it on the target soldiers and they're unaware of the location of your party, they would likely be caught unaware and would have less predictable movement.

In games I run, I rule that sudden blindness (especially that caused by magical effects) causes disorientation, unless the subject has some special effect to counteract this, such as always knowing where north is. In cases of disorientation due to blindness, I roll 1d8 to determine the direction of movement. :)

Blindness is accompanied by a set of penalties already:

For a battle hardened creature, they might be inclined to move towards where they think the adversary is located; in this situation they experience the aforementioned penalties and no more. However, if you believe that the targets might be intimidated by the darkness and other effects that accompany the spell then it can make sense to refer to the morale rules on the DMG. A series of reasons for individual creatures to flee are given:

In this case, it would likely be the first condition that triggered the morale check to see if the creature flees. A DC 10 Wisdom save is used to evaluate whether their morale breaks; if the creature fails the save they could flee in the opposite direction of the caster (if they know who is the source of the spell) or, alternately, roll a 1d8 and have the creature move in the appropriate cardinal direction.

44
Does Devil's Sight enable one to see into Hunger of Hadar?
3
Can the spirits in the spell Spirit Guardians see in the fog or dark?
14
Does this Warlock ability combo allow the whole party to ignore Darkness?
5
How does detection and Perception work in a dark room with no-one Hiding?
6
Character inside of Darkness vs Wolf?
16
Does a warlock using the Darkness/Devil's Sight combo still have advantage on ranged attacks against a target outside the Darkness?
4
Enemies Abound: When to choose a new target?
15
What happens if the Daylight spell overlaps with the Hunger of Hadar spell?
8
Eldritch Devil Sight and Darkness spell
17
Speeding up combat inside a Darkness spell