What is the name of this D&D 3.x adventure module in which zombies attack a village?

I am looking for a 3e or 3.5e Dungeons and Dragons module that I played about 10 years ago (+/− a few years or so) that I never got to finish. We played it right after we finished Scourge of the Howling Horde. It probably was no later than 2009. The module is low level, something like levels 1 or 2.

At first you walked through some bog, then you encountered a gypsy camp who told your fortune, then you went into a town that had its dead coming back from the dead.

The town wasn't super memorable, had the basic things like an inn, blacksmith, etc. I think the party arrives when they are burying one of their dead with the coffin nailed shut.

We investigated some sort of mansion or house (don't remember why). The manor I think had some information on what was causing the undead, but I don't remember for certain what it had in it. Then we had to come back to the village for some reason.

Basically the session ended with the undead banging on the tavern door as we were about to hold the fort down, and we never played again.

I want to find out what the name of the module is, but my mind is drawing blanks? Anyone know what module I am thinking of (if it even was one)?

Alright, so the DM actually found the module!

The module is Night of the Walking Dead.

Seems like it's a 2e module that the DM converted to 3.5e. Thanks all for the ideas!

Possibly the Expedition to Castle Ravenloft. 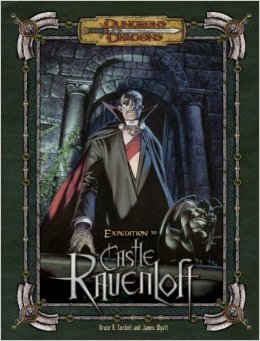 The overview of Act I describes the general encounter of your question:

Upon arriving, the PCs find the village of Barovia under siege from a sudden zombie infestation. […] Over the course of approximately three sessions of play, they fight zombies (with the help of a band of zombie-hunting mercenaries), encounter the new burgomaster and learn of the death of his father, and meet Ireena Kolyana […]

After the zombie encounter, then 'gypsies' will tell you your fortune, you meet up at a church, and etc. Sounds like a pretty close fit.

Not the answer you're looking for? Browse other questions tagged dnd-3.5e product-identification or ask your own question.