Is this Orc and Hobgoblin hybrid well balanced?

I've been thinking on creating a very specific NPC for the E6 game I'm running. This NPC would be a male barbarian, a hybrid between an Orc and a Hobgoblin, perhaps with advanced age. There is no official rules for a Half-Hobgoblin race, though there are several homebrews. I came up with this, and would like feedback on its balance. My idea is to get to something that has a +1 level adjustment. When I compared with the gnoll race, which has some racial hit dices (not the case for my race) and a level adjustment of +1, it didn't seem so powerful. Take a look:

When you look at it, it is basically a half-orc with +2 Move Silently and +2 Cons/-2 Wisdom. Is this too far beyond a LA +0 race? I'm not comfortable with the -2 Wisdom. I could add something like having a penalty to Charisma skills whenever dealing with Hobgoblins and Orcs due to prejudice. Is this balanced at +0 or +1, and what would I need to change to make it a solid +1 LA?

Officially, this is likely a Level Adjustment +0 race

As has been said, the race matches Wizards’ precedent and statements.

Thus, Wizards’ decision to make Strength count double in racial ability score modifications was a mistake, and a bad one; the half-orc is widely considered the worst Player’s Handbook race as a result. The orc is generally considered superior, despite also being having a net-negative ability score adjustment, because at least the +4 Strength means you’re getting something special for it.

Considering the strengths of the respective races, giving +2 to all physical scores while −2 to all mental scores seems like a more reasonable action. This is clearly superior to the half-orc, but the half-orc is a terrible race. Meanwhile, the orc remains superior for someone focusing hard on Strength – a dungeoncrasher, perhaps.

Finally, regardless of ability scores, the other racial features are really minimal. There are relatively few features that are restricted to hobgoblins or orcs, and a tiny bonus to a single skill is not terribly impressive. The source races, unfortunately, give nothing to work with.

We have a definition of "overpowered", and I think it applies here: anyone who wanted to play a melee type would choose your half-orc-half-hobgoblin race over the basic half-orc, because they would care a lot about +2 CON and barely at all about the -2 WIS.

Having said that, this is still much closer to LA+0 than LA+1. If you're a DM and this is an NPC, feel free to run it as LA+0 and nobody will mind. If you're a DM and a player comes to you with this template, I recommend asking them to use the half-orc racial stats and just narrate that it's also half-hobgoblin.

The Goblinorc already exists as a 3rd party published hybrid.

You can find it within: 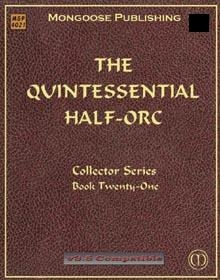 You can find all of their Half Orc variations on the Grand OGL Wiki. They give theirs a +1 LA. But your home-brew is not "overpowered" in my opinion - but that is just my opinion. You would only find out that answer in play-testing.

Let's compare your hybrid to another published creature, the Neanderthal (WotC).

There are a couple of things that the Neanderthal has, that your hybrid, does not, including Primitive Weapon Mastery. Comparing the two, point for point makes yours seem a little "weaker" than the Neanderthal. So, once again, I restate my opinion, "Your home-brew is not overpowered."

The Neanderthal is rarely considered in many of the min/max 'handbooks.' The Neanderthal, physically, is more powerful than many other LA 0 races, but is steeped in the illiterate primitive human - and setting specific. The setting, in the Neanderthal's case, is the Frostfell. So in the arid plains, or swampy marshlands, as far as WotC is concerned - shouldn't be many, if any at all, Neanderthals running around.

Should the Neanderthal have a +1 LA? I believe it should. It's mental stats do not compensate for it's physical stats - despite a -2 to Dexterity, which a Barbarian is rarely if ever worried about.

Your hybrid race, specifically, should have a similar LA +1 - especially considering the Hobgoblin also has a LA +1. I believe Mongoose Publishing took that LA +1 from the Hobgoblin in consideration when they made their hybrid.

Not the answer you're looking for? Browse other questions tagged dnd-3.5e races homebrew-review .

57
What makes a character/creature/power/ability/etc. over-powered?
7
Buff the mighty - half-pint?