Limits to Controlling Animals in nWoD

My hunter in the new World of Darkness is exploring training animals, especially attack dogs. I know the basic rules for training and controlling them, but I am curious as to the acceptable limits to this system. In particular:

EDIT: For the dogs themselves, my ST agreed to just use the basic dog in the core book for simplicity, and I am training them as if they were rescues, so no prior training at all.

1) What tricks are reasonable? With Storyteller approval, I am thinking of Basics (sit, lie down, heel, etc.), Hold (attempt to grapple target, then attempt to render prone), Joint Attack (using the Wolf Pack merit rules), and either Tracking or Surround (cut off escape routes and keep grapple attack prepared for escapees).

EDIT: For more questionable tricks (like Joint Attack), I would appreciate substitution ideas for teamwork tactics with the dogs (Thanks, Ahriman!). A replacement I am thinking of would be Pack Combat or Group Training (different name, same thing), which would be training specifically to apply other commands while in a group.

2) How many dogs could a character reasonably control? RP-wise, my character has a natural affinity for dogs (he is secretly Wolf-Blooded, but that is just a flavor thing rather than mechanical) and I want his dogs to be a subconscious pack for him. I know that most of the time he will be limited to one or two dogs, but what about during open operations? For example, could he control 8 dogs if he is in a large area with both line-of-sight and hearing?

EDIT: When using the larger groups of dogs, I intend for the commands to be given on a pack scale rather than individually, and they would have been trained in a group for those maneuvers. (Thanks Ahriman and Eimyr)

3) I have been treating commanding the dogs as an instant action. With training, would it be reasonable to teach a dog to act as an incidental? It would be more for one or two special canines that he is especially connected with it, where he would train them to obey with short commands (probably with a penalty for not visually indicating the command).

4) How would I handle using dogs as an intimidation tool? I would presume it'd be a teamwork roll, but how many dogs could it work with? My thought at this point is a limit of two, but I would like to hear what other STs think.

5) Can a dog immobilize a target as an overpowering action in a grapple? If not could several (like a different one grabbing each limb and pulling apart)?

Thanks to everyone who answers in advance!

Dogs are one of the easiest to train and most powerful allies in combat. That's why it's dogs that are used for tracking (despite cat's superior sense of smell), hunting (despite other better runners or swimmers) and combat (despite... well, you can imagine what a bear or a tiger could do). What you need to consider is the difference between training one dog and training a pack of dogs.

In the first case, which is preferred for highly trained working dogs such as seeing dogs, police and military and retrieving dogs. This one has the benefit of being able to understand the commands very well, learn a lot of different tasks and ability to micromanage your dog's behaviour.

Training a pack of dogs is different, as in general it's impossible to micromanage them (they will confuse your commands, not knowing which dog does what) and requires a few leading dogs, that champion the rest with do-as-I-do attitude. It has advantages of being much more independent and that dogs compensate for each other.

So, for your questions: 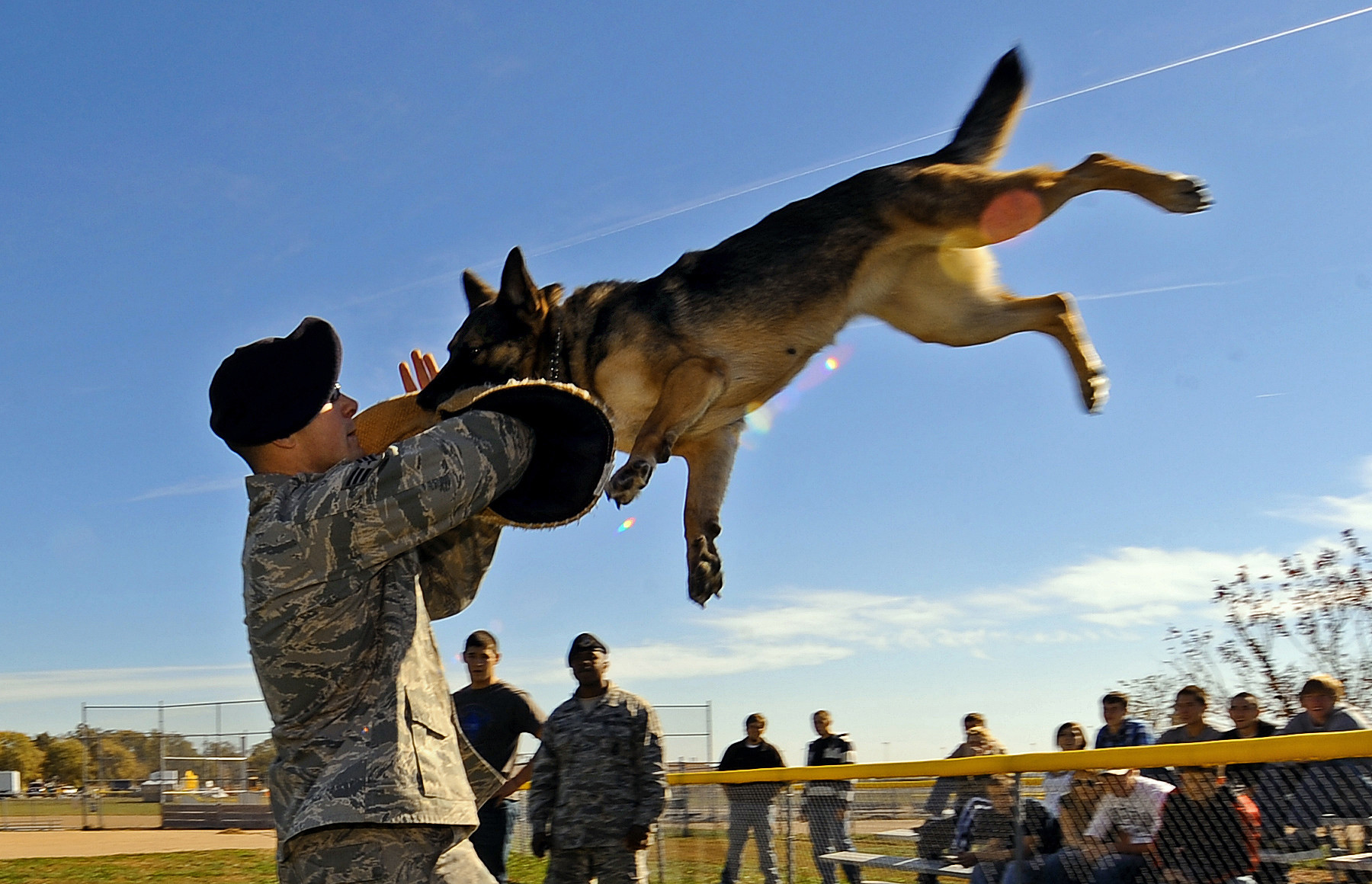 1) Your tricks are spot on, only that in the herd you would not be able to micromanage them between specific dogs unless in a very controlled situation, certainly not in the battle. For teamwork tactics, the most obvious are Intercept, where the dog chases and trips the enemy before he can act against you, or you shoot the enemy before he attacks the dog. The other one is Flank, where dog would use stealth to approach the enemy from the side (or from the back). Do not forget Fetch, Retrieve, Flush (force the enemy to leave hiding), Pull and Guard.

2) Any number up to about 20, provided they are trained well enough and in a familiar situation. 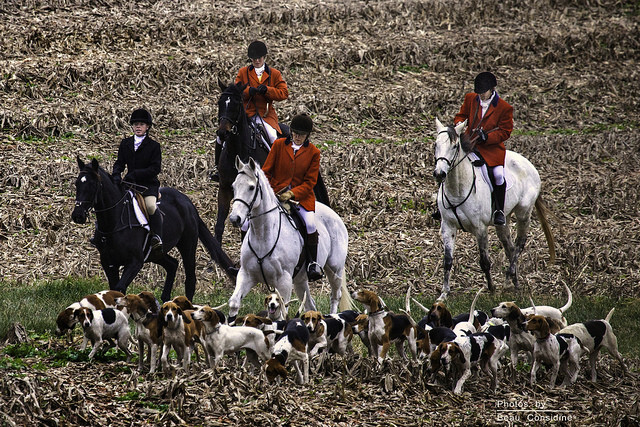 The problem is micromanagement anything above 3-5 dogs would have to be acting as a pack, otherwise they will become distracted and directing commands to specific dogs will be impossible.

3) I would say that having **one dog* or a **one pack* could be incidental. There is usually no need to have a visual command component to the command or a command at all. Police dogs can often recognise the situation they are in even without command and prevent the suspect from drawing a weapon etc. However, if you desire to give a different, specific command to more than one dog, that requires a lot of effort both from yourself and the dogs involved. Failures would mean that either the wrong dogs do the right thing or the other way around, botches might mean all the dogs in the area become confused and unable to act at all.

4) Think of intimidation not as a teamwork feat, but as a circumstance bonus. The mere presence of dogs baring their teeth in presence of enemy is enough, the dogs don't need to do a lot to be intimidating. Intimidation is a funny tool, but a pack of snarling bull-terriers would warrant a +3 (immediate threat of painful death) while a single chihuahua... you get the idea.

5) A single dog can do it quite easily with police or military training. Unless the enemy is trained in fighting canines, the dog will force the person off balance, trip and pin them down by biting and tucking their limbs. If such a person tries to stand up, the dog will pull their feet from underneath them, forcing them back on the ground. Unless you have a knife or a gun hidden (the dogs can spot obvious ones and prevent you from using it), there is almost no way you could run away safely when the dog has already caught up. Note that some dogs weigh 40+ kg, so it's enough to overpower an average adult.

Also if you have supernatural powers, who knows what else can you train the dog to do? 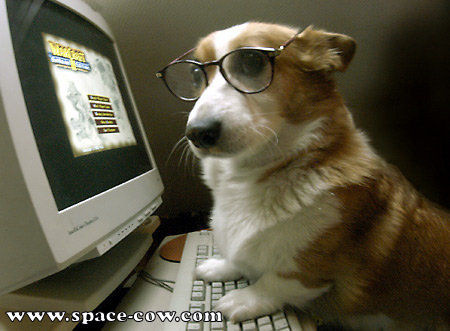 First and for all: an excellent idea! I don't see a lot of players attempting to play with animals.

I have no personal experience with animals, so I would use Handle Animal of D20 SRD as inspiration with regards to tricks. Especially take a look at the of Train for a purpose section (although I would add basic tricks to all purposes). In light of basic herding commands, I would allow a dog to learn more commands than listed there.

I would be willing to entertain the use of dogs in hunter Tactics (or even be your own cell for them; for me this leans closest to what you want to do). Some lend themselves to it very well (with some tweaking here and there): Corral, Confuse the Scent, Cripple Claws, Draw and Quarter (hello point 5), Distraction, Eviscerate, Hamstring, My Brothers Keeper, Pack of Bloodhounds, Ruination.

I have checked some merits (Animal Companion from Changing Breeds p95; Animal Retainer which is homebrew) and two good, trained dogs seems reasonable and fair with regards to your fellow hunters.

You could go for more dogs, but then you would sacrifice quality and/or training for them (and all the controlling issues that would ensue). You could go for five dogs, but they would be run of the mill and have zero training (and thus be hard to control as a group, due to pack mentality). In game that would translate to rolling a lot to do anything and requiring quite the time commitment of the character to do anything with the pack (=you're the crazy dog man/woman). So expect to get some cops that come and annoy you, Animal Control, (false) complaints about noise or biting, ...

Properly trained dogs require commands to act, so no the dog could not act as an incidental (if they would, then you're no longer seen as the alpha of the pack). I would allow you to set a dog in a certain mode (for which it has been trained) and then that dog would react according to his purpose.

You want to give a command in the heat of the action to a dog? That's an Animal Ken roll with the following possible modifications: are they trained for it, how is the command given (visually / verbally / combination of both), how much noise is there (like a snarling werewolf), ...

Or we're go with the tactics idea of earlier, then you just follow the tactics rules. So you roll for primary (or the dogs; depending upon the tactic) and the dogs for secondary (or vice versa).

If we apply this to intimidation, then we have the following options: - If they're trained dogs, then you could let them assist your Intimidation efforts. - You let the dogs Intimidate your target (hopefully you can control the pack to not attack the target, roll Animal Ken to properly command them...) - You use the Corral tactic

TL; DR use the D20 SRD description of Handle Animal as trick inspiration and ask the Storyteller if your dogs can be used in hunter tactics.

0
Eidolons and Teamwork Feats
1
Can a grappled opponent still move?
3
What exactly can an animal companion do when you succeed or fail the Attack trick check?
7
Does Intelligence damage on a trained animal mess with its training (and with its feats in the case of an unusually smart one)?
8
Benefits for Animal Companion
3
How long would it take for me to train my animal companion to use a shortsword?
9
Would this Owlbear Cub be balanced as a Beast Master Ranger's Companion?
0
How are tamed animals treated in terms of abilities?