Why did the designers make it so chromatic dragons can't shapechange? [closed]

This question does not appear to be about role-playing games within the scope defined in the help center.

In 5e, the Monster Manual states that each kind of Metallic Dragon gains the Change Shape ability by the time it is Ancient or Adult. However, no such ability is ever mentioned for Chromatic Dragons. This has been the case in every edition of D&D, as well. Have the designers given a reason for the difference?

I do realize that Chromatic and Metallic Dragons have different styles of interacting with humanoids. Metallics are much more likely to take a jaunt amongst humans or elves for a decade or three, so perhaps the absence of the ability reflects the fact that Chromatic Dragons simply don't do such things, not that they cannot.

It All Started With Gold Dragons

The first dragons able to change shape into human form were Gold Dragons. None of the others could. On pages 11-13 of Monsters and Treasures (OD&D, 1974, TSR) there were a total of six kinds of dragons: red, blue, white, black, green, and gold. The only metallic dragons in the game were described as "being a class unto themselves." They were the only Lawful dragons1 (the others all being Chaotic in the old law/chaos alignment dichotomy), could take on human form and could employ spells up to sixth level which was the highest spell level in the game at the time.

Spell ability for other dragons were limited: White, none; Black, 1st lvl; Green, 1&2 lvl; Blue, 1&2 lvl, and Red 1 - 3 lvl. However, spell usage was only available if the dragons rolled on the "able to talk" chance. Even an ancient red dragon could not cast the 4th level polymorph spell.

The Platinum and Silver dragons could assume human form. Copper, Bronze, and Brass dragons could not. The basic dragons remained bound to wyrm form. (Which is fine, if you are a dragon).

1e AD&D carried this design theme over. Only Platinum, the Silver and Gold Dragons could appear in human form ... unless they were a spell using dragon. Depending upon the dragon kind this capability was variable, and only dragons who could talk had a chance to use spells. The metallic dragons had higher chances to talk, and to use magic, based on a percentile roll than the basic/chromatic dragons in general. To determine if a dragon could use spells ...

In later editions and supplements dragons, like cloud dragons and shadow dragons, didn't have human form either, but steel dragons did. The number of articles on dragons in Dragon Magazine is non-trivial, so I won't try to summarize all of them. While I don't recall ever reading a "why" on the difference in innate ability, it may have been in one of the articles(it's been a lot of years).

The most plausible explanation as to why this theme carried over into 3, 3.5, 4, and 5 is "inertia" or "tradition" in keeping the game design faithful to its origin. At least the later edition dev teams were consistent, when you go back to the origins of the game, in confining the shape changing "class ability" to metallic dragons because that is how they were originally folded into the game.

Why would the devs change that? The distinction is as old as the game itself for the namesake monster of the entire franchise.

I offer a small frame challenge here, and suggest that the question may be backwards, and that the dev question is why did they make it so that Golden dragons could shape change, not why the other dragons couldn't. The follow on is "why could lesser metallic dragons change into human form?"

(That still leaves open "why would later devs change that feature?")

Why? Part 2 = Borrowing from an eclectic mix of myths and legends

Part of the answer is that the golden dragon came from a different cultural / mythological base, China, just as Bahamut and Tiamat have a relationship with the mythology of Sumer/Babylon, and the Eurocentric dragons like the ones Saint George slew, the one Beowulf slew, Smaug, etc. (The illustration in the 1e and 2e MM's are both evocative of an Oriental/Chinese dragon). 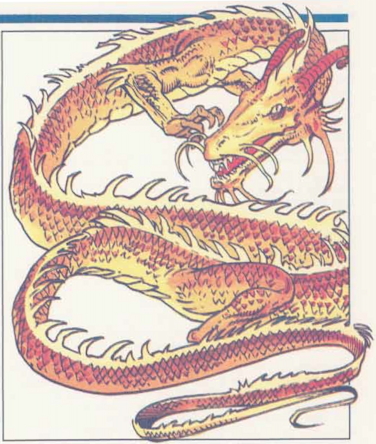 1 From the ENworld archived thread of Q&A with G.G.

Draco Argentum: Gary where did the idea for having the cromatic and metallic dragons come from?

Col_Pladoh: ... If you read the intro to the SLAYER'S GUIDE TO DRAGONS from Mongoose, you'll see therein how I came up with the chromatic dragons. Some colors other than red were needed, hues that would be harmonious with their breath weapons. When I'd done the four new additions to the CHAINMAIL red dragon, it seemed a good plan to have a LG dragon, one of gold color that was based on the Oriental model. From that I worked on the rest of the metallic species. Of course, such potent creatures needed great leaders or masters, so I delved into mythology for the names--Tiamat and Bahamut--and thus came up with the Evil Queen and good King of the chromatic and the metallic dragons. Cheerio, Gary

The first edition AD&D Monster Manual hints that good dragons can be encountered in more innocent guises that will come to the aid of the needy and punish evildoers (perhaps even the party).

A sage tells of encountering Bahamut in the guide of an old hermit, with seven canaries singing sweetly as they flitted nearby. The sage relates that he would never have known that he was anything other than what he appeared to be except that a group of ogres and trolls happened by much to their sorrow...

It is in other some other form that [gold dragons] are typically encountered.

That sort of material should not be included in a game that purports to be â€śheroicâ€ť in nature and promoting the triumph of good over evil.

The possibility of any NPC secretly being a gold dragon was a sort of heavy-handed way of keeping unruly parties from abusing the local peasantry.

Not the answer you're looking for? Browse other questions tagged dungeons-and-dragons history-of-gaming lore dragons designer-reasons .

24
Where did the Chromatic/Metallic Dragons come from?
7
How do patrons with non-energy breath weapons interact with a Dragon Herald's (Bard Archetype) benefits?
9
Does a metallic dragon revert to its true form with full HP if it drops to 0 HP while shape changed?
12
If an Ancient Metallic Dragon uses Change Shape to turn into a humanoid with Innate Spellcasting, do the uses of â€śX/dayâ€ť spells reset each time?
12
What is the CR of a Metallic Dragon after it uses Change Shape?
23
Why do red dragons and gold dragons have the same CR?
3
Are there examples in lore of a dragon learning new spells like a wizard?