What is the space size of a Colossal Animated Ship?

In Pathfinder I am currently trying to design a few encounters with a supposed ghost ship (actually a Colossal Animated Object) complete with a crew of Haunted Objects (again, Animated Objects), but I am having a few difficulties with the logistics behind my concept that I cannot ignore.

One of the biggest concerns I have is with the ship's Size vs. its occupied Spaces. While looking over the Space, Reach & Threatened Area Templates, I found that a Colossal creature is either 64 feet tall or long, which would be a perfect length for a small ship that the party could board and fight with the crew. However, in the same row, it says that they also cover a space of 30ftX30ft. Since the creature in question is a ship, and a large raft with a 65ft sail is dumb, could I fit the ship in a 60ftX30ft area that the party can climb/board on top of? If not, could I slide around a 30ftx30ft square for the hull of the ship, and have a separate map that represents the deck/quarters of the ship?

The values on the table Space, Reach, & Threatened Area Templates are just guidelines, most creatures will follow those rules but not all of them have to.

One example of a creature that completely ignores the table can be found on AP#27: Council of Thieves - What Lies in Dust, which has the Aspidochelone, a CR 17 N Colossal creature with a listed Space of 150 ft..

If you allow me to give you a suggestion, you can use the Boarding Action (or another similar map) flip mat to represent the creature's actual size. 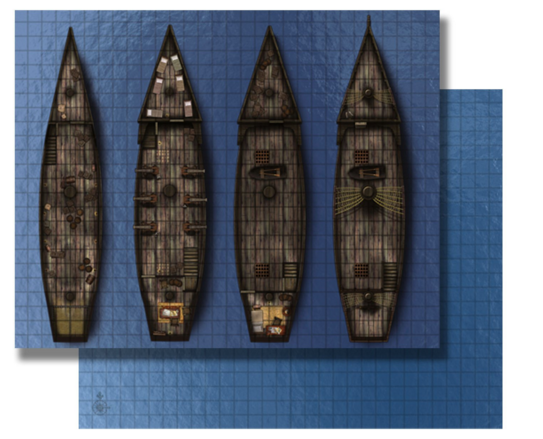 It's your creation. So while you might not like this answer you are totally within your rights as DM to give custom monsters custom features. (Assuming you aren't running according to the rules of Adventurers League.) The players are unlikely to make a big deal out of it — what they might make a big deal out of is not being able to board it.

5
Can an animated cannon fire itself?
2
How can Constructs use Magic?
1
What size are the various races?
13
What, approximately, is the size of a Tiny creature?
3
What sizes of creatures can occupy the same space?
11
What happens when you end up sharing an enemy (or friend's) space due to a size change?
1
Stacking Size effects, what is the total buff?
30
What size category is a reduced Tarrasque?
4
What happens when a colossal-sized creature casts Righteous Might?