I am having a little trouble wrapping my brain around the Jump skill. I want to plan a battle with my players and the Tarrasque; two of them have the ability to fly - and it does not.

I have an idea of it using its Rush1 and a vertical leap to Bite, Improved Grab, and Swallow Whole a particularly dangerous flyer in the party.

Calculating a DC is throwing me off. Colossal, on the table, show vertical reach to be 128 feet. Rush has a movement speed of 150 feet, giving a +36 to the jump check. The DC is 4 times the desired height.

1 "Once per minute, the normally slow-moving tarrasque can move at a speed of 150 feet."

I apologize, throughout my years of 3.5 edition - I have hardly ever needed jump checks, and if I did they were so trivial it was like this:

"What is your bonus to Jump?"

I want to do this right, be fair, and have fun. I would love to surprise someone with the Tarrasque leaping and snatching someone out of the air.

How exactly do I calculate a Jump check to leap into the air, using Rush for increased movement speed, with a colossal quadruped? 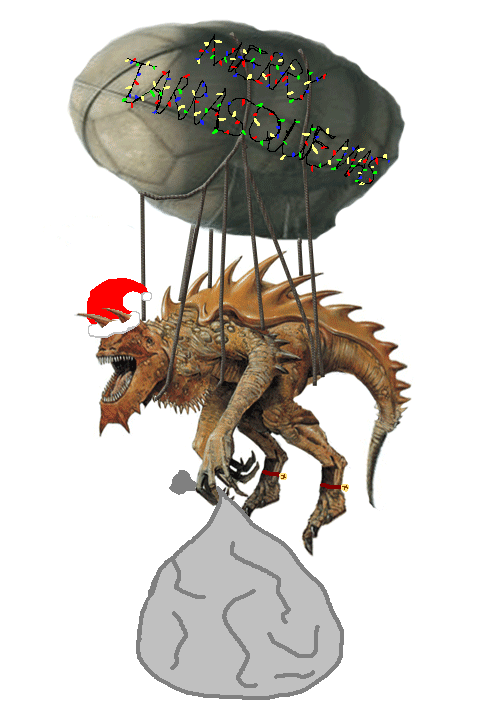 The Tarrasque's Jump check is not particularly great as it hasn't bothered to put skill ranks into it, just its Strength modifier of 17. It is even negatively impacted by its slow speed, for a total of +11. If it rushes though, it gains a bonus of ((150-30)/10)*4 = 48 instead of a penalty, a great improvement. The total effective Jump skill therefore becomes +65, which sounds impressive.

Unfortunately, it's not. It means that with a running start the Tarrasque can leap about (65 + average roll of 10)/4 = under 20 feet. Which would be amazing for a human, but is less than half of it's quadruped standing height of 50 feet. The mighty Tarrasque hops.

As for setting the DC for reaching varying heights, you are correct in thinking that no check is required if the height is within the Tarrasque's reach, and only the difference in height needs to be covered if it's not. Going by the 128 feet of high reach provided by the rules, all you'd have to do to calculate the jump DC is subtract 128 from the desired height and multiply the result by 4.

Going strictly by the rules in this instance results in a fairly unimpressive Tarrasque that would have no ability to reach enemies 150 feet in the air. The rules for skill use are written with humanoid and human-sized characters in mind, and strain to keep up the further you move from that norm.

You can try and keep working within their framework. Maybe, your Tarrasque put skill ranks into Jump instead of Search. Maybe it has a huge racial bonus to Jump, or keeps a wizard around as its familiar, to cast Jump as needed. None of these will get you that much further off the ground, but maybe they'll be enough.

Alternatively, consider the approach 13th Age (a sidequel to D&D) has taken in its depiction of the ubiquitous Tarrasque:

Note that flying is usually no defense against the tarrasque, which is huge and powerful enough to pluck or whack enemies out of the sky with surprising leaps.

That is the entirety of rules it dedicates to the question.

It really depends how you go about the rules as the DM lets assume your using vertical reach by size.The vertical reach is 128ft as stated before.Then a player within 120 ft doesn't require a jump to get too him/her,but, any higher would be most likely height-vertical reach times 4.

THOUGH the thing is lets consider the fact this is a quadruped which brings up the issue that their reach is with their head not with any limbs.So, saying it has 128ft reach is a bit unlikely and would probably make more sense to use it's base reach of 20ft + it's height which is 50ft. so lets say the person you want to jump and eat is 128ft up.

so the dc would be 238 while it's standing still. Now assuming your using rush to gain 150 ft.

it would still be a dc 176 for a jump cheek. The reason for the -10 is that a terrasque only has a speed of 20ft and gains a +4 for every 10 ft beyond 30 and doesn't get the -6 since the cheek isn't based off base speed.After all this though i think it comes down to whether you as the DM want to let it slide or not. Also leaving it up to you how you decide what it has to roll,ETC As far as i can tell there is no real right or wrong way to do what you are proposing.

Not the answer you're looking for? Browse other questions tagged dnd-3.5e monsters skills encounter-design or ask your own question.

7
Are there any established rules for flying in combat for D&D 3.x or d20 Modern?
2
Jump skill with Boots of Striding and Springing
4
What penalty does a medium load apply to a characters Jump skill?
8
How High is a High Jump?
3
How does the Female Steeder's Leap ability interract with grappling?
8
Monster Skill Ranks don’t match RAW?
4
Do the rules state that a character takes falling damage when making a long jump?
4
Does the “Unified Theory” skill feat have any interaction with the “Natural Medicine” skill feat?
16
Are unusually long jumps possible by RAW?