Have any of the designers of D&D explained why Strength increases Hit Chance? [closed]

This is a personal bias, but when I think high strength score, the imagery I get is: 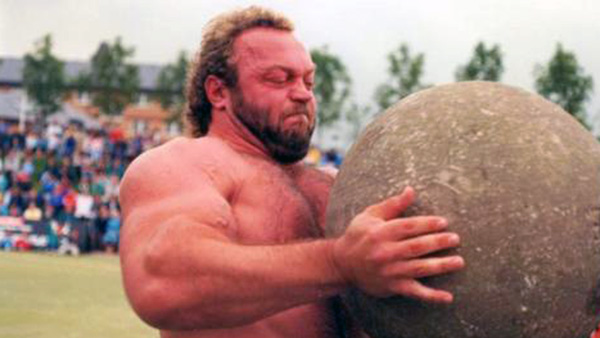 When it comes to accuracy of a muscle-bound and bulky person, the imagery I get is: 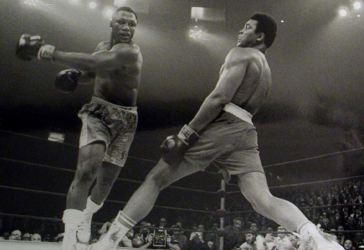 Bruce Lee had stated he didn't want to have overly bulky muscles because it would affect his agility and accuracy. He did believe in weight training to make his muscles more dense, but that mostly was for grip and striking force.1

I started playing with AD&D 2nd Edition, and even back then an 18 strength gave you +1 Hit and +2 to damage.

Have any D&D developers given any reasoning for why the Strength score, specifically, gives a bonus to hit?

As I recall, being big and strong doesn't actually help you hit a baseball, but may help you in making that ball you hit a home run.

1 Bruce Lee explains this throughout the Tao of Jeet Kune Do.

The original Strength bonus to hit, solely available to Fighting Men (what we now call Fighters/Martials) was not introduced until the Greyhawk Supplement to OD&D (1 Feb 1975, TSR).

In the first combat system, the only original bonus "+ to hit" was for Dexterity for missile fire. (Unless you had a magic weapon, for example.)

Strength above 13 gave a Fighting Man an experience point bonuses of 5%; Strength above 15 gave a 10% XP bonus, but neither gave a bonus to hit nor to damage. A Strength based bonus to hit was at best indirect -- with more Strength you'd get to a higher level sooner. A second level fighter hit AC 2 on a 17, and 4th level fighter (Hero) was the next table up and hit AC 2 on a 15, a 7th level hit AC 2 with a 12, etc. (Page 19, Men and Magic, "to hit" per the table.)

This changed in the first OD&D supplement: Greyhawk (the most common addendum / correction / update to OD&D).

Other character types may engage in hand-to-hand combat, but only true fighting men are able to use their Strength and Dexterity to utmost advantage."

With that point in mind, we proceed to page 7 of Greyhawk:

"Strength also aids the fighting man in his ability to both score a hit upon an adversary, and damage it."

Then on page 8 of Greyhawk, we note that only Fighting Men

" ... with a dexterity of greater than 14 can use their unusual manual dexterity to attempt to dodge or parry opponents attacks."

Summed up: only the martial characters could, via their profession, take advantage of their Strength to land an effective / telling blow and use their Dexterity to avoid getting hit. Anyone else could be strong, but would not get the advantage of "+ to hit." Anyone else could be agile, but since they weren't professional fighters, the Dex based armor class advantage didn't accrue to them.

Simple Answer to "Why?"

To make Fighters more formidable opponents. (Fighters tended to be melee specialists / tanks from the beginning.)

Commentary: it was understood during the play tests that went on where D&D first grew that the problem of the Linear Fighter and Quadratic Mage (as we call it now) was looming.

This restriction to Fighting Men of the Strength benefit to hit, and to damage, was lifted in the 1e AD&D PHB. The "Why" on that is another matter, given the speed at which the game was growing.

While only Fighting Men and their sub-classes could benefit from Extraordinary Strength (18 Str Fighters rolled percentile dice 01-00 for additional benefits) in AD&D 1e, the stronger-than-average Cleric would do a bit more damage when he whacked someone with a mace. The AD&D 1e system formed the backbone of what we play to this day, for all of the variations that have come to pass. (As did BECMI, which took a similar approach.)

The "+ to hit" and "+ damage" based on stat ability is rooted in making the martial character stand out in combat. This makes a lot of sense, when you begin to apply real world comparisons between people who really know how to fight (professionals) versus anyone else.

1 Of passing interest, but off topic for this answer, the cover of the book says "The Original Adult Fantasy Role Playing Game for 3 or more players."

23
Why are Clerics and Druids Wisdom-based?
2
Is there a rules-consistent way to rule a character trying to grab a snake?