Are the rats in 5e over powered? [closed]

So killer rat swarms in D&D always seemed weirdly overpowered to me. In 5e a swarm of rats does 2d6 damage, or the equivalent of being hit by someone swinging a greatsword every six seconds. Or enough to kill an average commoner in 3 seconds. That just never seemed right to me.

So assuming they were magically compelled to attack people or something like that would a swarm of regular rats realistically be that much of a threat to a group of healthy humans trying to wade through them?

My instinct is that they've be more of a slow and painful environmental hazard than something immediately lethal (dying later of disease or blood loss is a different story).

This is not realistic and isn't intended to be. In many ways, this one included, D&D is not emulating reality, it's emulating fantasy fiction tropes. The trope involved here is the aptly-named Swarm of Rats:(Warning: TVTropes link)

Rodents are widely reviled, but not very threatening; after all, anyone can set a mousetrap. So how do writers make them a legitimate threat? By having a very, very large swarm of them all at once! One rat isn't scary, but a huge wave of rats eating a victim alive, one bite at a time? Horrifying.

Note the bit about writers in there: this isn't a matter of realistic rat swarms, this is about the horrifying, slavering, diseased, malevolent Evil Rats(Ditto) that live only in our cultural imaginations. (In reality, rats are one of the most intelligent and affectionate rodents.*) An unrealistically-dense and -large swarm of fantasy rats is much more dangerous than a realistically-not-dense and -not-large swarm of these adorable furballs: 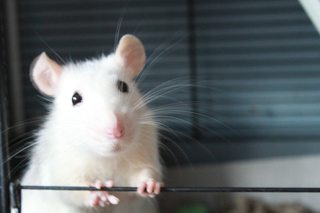 * Not necessarily affectionate with humans if they're wild, because that would be maladaptive! They are affectionate and intelligent compared to other rodents, regardless of domesticity, contrary to popular imaginings of various rodent temperaments. Most rodents that we think fondly of, like mice and Syrian hamsters, are actually temperamentally loners and jerks.

Even in the real world, without magically enhanced beasts, Rats can chew through Steel.

To put this 24,000 PSI number into contrast: A Rottweiler has a bite of less than 350 PSI.
An African Lion has a bite of 691 PSI.
And the Saltwater Crocodile, which has the strongest bite of any animal today*, only has 7700 PSI.

With a little more predatory instinct, and some determination, a rat could hamstring a human in a single bite or chew through their jugular. And a swarm with hundreds of these monsters would not need to be smart, with hundreds of biting mouths they could strip the flesh from your bones like a swarm of piranha.

Rats are not a threat to humans normally, as they are not brave enough to attack one, not because a swarm would not be able to kill one.

* The apparent contradiction is based on how you measure the biting force. Rodents (from Latin "to gnaw") have by far the sharpest teeth of any animal (I am aware of), and additionally have greater control over their bite compared to any other listed here. Allowing them to focus all their force into a tiny point, while crocodiles and lions are left to crush and tear.

Swarms are an unnatural grouping of small creatures into a lethal crowd/group.

As discussed in this answer on a related question about swarms, the swarm as a thing is a case of "the whole being greater than the sum of its parts."

They form as a result of some sinister or unwholesome influence ... even Druids can't charm these swarms, and their aggressiveness is borderline unnatural. (MM p. 337)

The nature of "swarming" makes a bunch of single creatures act collectively and thus pose a greater danger to a party than a few rats. Consider this: a squad of soldiers or goblins is far more dangerous than a single soldier.

The question doesnt seem to be about rules but nonetheless I'll answer it like this. There are several accounts of people killed by rats though the majority of them are infants or sick people unable to defend themselves. If you've ever startled a rat in a cornerd space you know how aggressive it will get and they could pose a threat, for example, if they are fleeing a sewerflood and you stand in their way they could attack to get away. Their instinct is to flee but they can go berserk and two hundred or so creatures of about 0,5 kilos attacking you with teeth and claws would pose an immidate threat.

Not the answer you're looking for? Browse other questions tagged dnd-5e damage damage-types animals swarm or ask your own question.

23
Can swarms be pushed or pulled?
2
Break through leaking hit point abstraction

5
Level 1 fighter seems over powered
15
Does Warding Bond carry over damage type?
31
Can a Wizard polymorph low-level PCs into over-powered beasts?
15
Are goblins able to control rats and wolves?
18
Would an artifact that enhanced proficiency be too over-powered?
18
Can the Conjure Animals spell summon swarms?
5
Can I breed and train an army of wild rats?
8
Are rats considered mammals or vermin (for control spell purposes)?
14
Can the Rats of a Hat of Vermin be valid candidates to make a Swarm of Rats from a Pipe of the Sewers?