What is incorrect with my Anydice logic for 'Weapons of the Gods' roll mechanics?

While scouting Actual Play write-ups, I have encountered a reference for an interesting dice-rolling mechanic.

I instantly wanted to see how the results distribution curve would look like. My Anydice code for that:

My problem is: the distribution shows different probability percentages for results that I thought should come out the same. For example, for N = 4 (rolling 4d10), it shows 41 (four ones) will come out 0.57% of the time, while 45(four fives) - 0.05%.

What is wrong with my Anydice code, or, conversely, with my understanding of the mechanic (is there a reason for ones to be more statistically probable than fives)?

You are using this code to set up a base value:

Your intent is to get the highest number rolled on any d10, however the maximum function expects dice, and you have provided a sequence. According to the documentation:

I believe that initializing SUM to 0 should suffice, as your loop should always find something greater than 0 anyway. 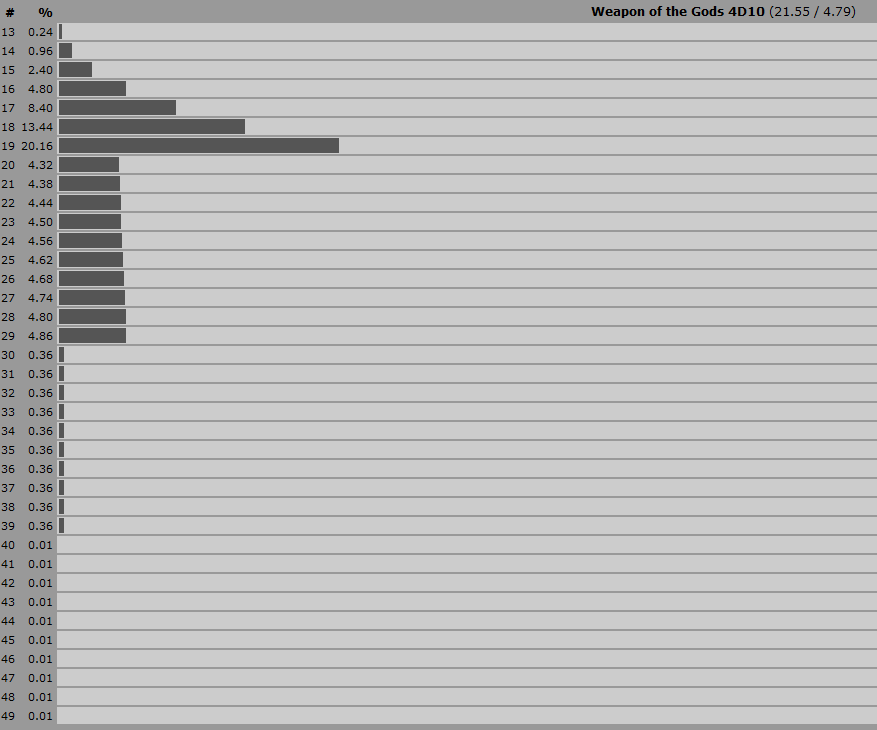 Not the answer you're looking for? Browse other questions tagged anydice .

7
How do I find the highest number rolled in a pool if dice, and the number of times it is rolled using AnyDice?
2
Help with AnyDice Script for a d6 Dice Pool
3
AnyDice functions and subsequent dice rolls
10
How can I get the highest or lowest values of an irregular dice pool in AnyDice?
11
How can I model this "Party Draft Pool" ability score generation method in AnyDice?
28
How does one calculate the distribution of the Matt Colville way of rolling stats?
2
AnyDice: Sum of dice pool + highest value from the same roll
1
How do I check the lowest roll in a pool of mixed dice in Anydice?
7
Is it possible to model these probabilities in AnyDice?
4
Modeling a system where you roll Xd20 and take highest, plus the second highest if the first one is a critical, etc