I am delving into DM'ing a Drow campaign. Despite having read numerous novels and publications spanning from TSR to WotC to Paizo, I am now having trouble wrapping my head around the idea of their inherent light blindness and illumination within their cities.

Whenever I look at artwork, I often see a faint ambient glow and light coming from windows, such as: 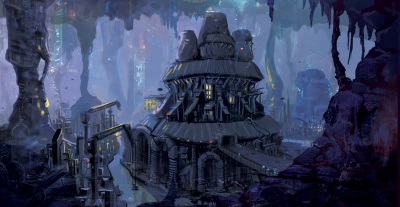 I have read that Drow like to dress with certain colors, yet if there isn't adequate illumination the only colors they see are black and white with darkvision.

Does anyone know if Drow actually illuminate anything? I seem to remember from something I read that in one city (and forgive me for this horrific recollection) there was a central stone that would glow and not glow to give a resemblance of a day and night passing by.

If the drow do use illumination throughout their dwellings, how much light is enough to not interfere with their light blindness?

For sake of gameplay mechanics, this is a 3.5 campaign. However, the question is general enough that edition shouldn't matter as much.

Drow typically utilize magic in the following ways for illumination:

1R. A. Salvatore, War of Spider Queen, Dark Elf Trilogy
2The light is too dim to have any special effect on undead or dark-dwelling creatures vulnerable to light.
Share
Improve this answer
edited Feb 2 '16 at 0:43

The pillar may be the case for Menzoberranzan, but it isn't necessarily universal. One of the original Drow sources (the old module D3 - Vault of the Drow) mentions special lenses of ultravision that can be used by anyone to to see in the ultraviolet/infrared range. This is accompanied by fungus that radiates ultraviolet light.

In many (most?) rule sets, drow infravision has a limited range (120 feet in 3.5). On a city-wide scale, this isn't good enough for things like navigation or guard overwatch. Even basic ranged weapons are reasonably effective at a longer distance.

Lighting, therefore, is useful to help avoid people getting lost ("Head for the pillar with a lot of lit windows, then take a left and head for the temple of Llolth with the glowing altar on top"), help spot people who are trying to sneak up on your fortress, and ensure that you can fight back against attackers.

Not the answer you're looking for? Browse other questions tagged dungeons-and-dragons lore vision-and-light drow or ask your own question.

8
Are drow considered to be witches?
6
Are there any resources that compare Forgotten Realms cities?
67
How do I encourage Drow players to not make Drizzt clones?
5
How do Drow make poison?
4
What skills are Drow proficient in?
11
What is the home of the drow in Flanaess?
12
What Pets or Livestock Would Drow Have?
2
Are Drow proficient in Drow's Poison?