Can the Half-Troll template be used for Troll sub breeds?

Since there is a Half-Troll template in the Fiend Folio, I was wondering if that template could be used to make half breeds of the various Troll sub breeds? Such as the Crystalline, Cave, Forest, Mountain & War trolls found in the Monster Manual III? Or is there perhaps another template or set of templates I need to look at?

And if I did use the Half-Troll template, What would be a good and balanced way to show that this particular Half-Troll is descended from one of the sub breeds rather than a normal Troll?

It's not so much that the template is unclear as it seems to assume a standard set of abilities for a creature descended from a whole host of different iterations of the troll, which each have a few different abilities than the rest. Some abilities are indeed going to be standard but it's those "others" I'm curious about. It mentions that a change has to be made for the Scrag (Aquatic Troll) for instance, which leads me to believe that other sub breeds would "possibly" require alterations as well but doesn't make mention of any of the other types

It's possible that, much like the Half-Dragon template, there's been an updated version printed in a different book that I'm unaware of. I just mainly want to make sure that the Half-Troll template presented is, by RAW, useable with the sub breeds 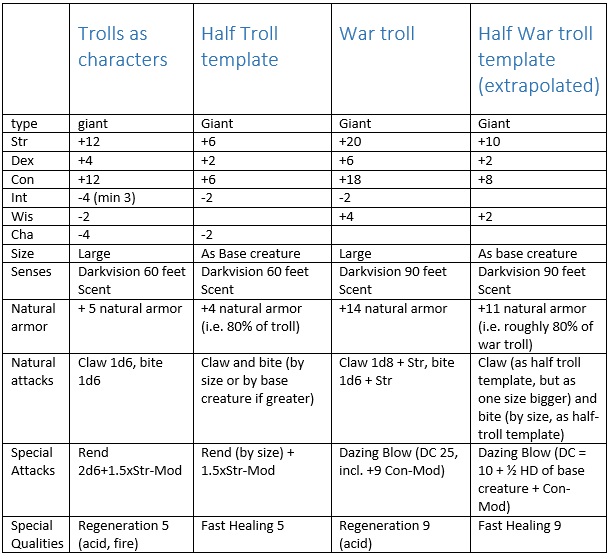 The general guidelines seem to be: the half troll gets half the ability modifiers of the troll as character. Only even modifiers are considered, odd numbers dropped.

The size of the half troll template is determined by the base creature. (I have a hard time imagining a half troll fly, but maybe that is only my problem.)

Natural armor modifier of the template is 80% of the "full troll".

Natural attacks are confered to the template, but modified by the size of the base creature. I would use the table for half trolls, modifying it as necessary if the troll subrace in question has a stronger natural attack than a normal troll.

Special attacks are apparently transfered to the template, but modified by the new size.

Regeneration is reduced to fast healing.

Scent and Darkvision are kept.

I think these guidelines could work for the other subraces as well.

5
Can I create a PC with a template?
5
What does "aligment: always good" mean in the Half-Celestial template?
2
Can Class-granted templates stack with other templates that would negate the original?
6
When applying a template, which comes first: the template or the first level feat?
4
What LA should this custom template be?
4
how to balance a character with the half-ogre template (or the party)
3
How many levels does the Weretiger template take to complete and why?
0
What counts as Hit Dice for the shadow creature template?
6
Can the half-dragon template have a negative impact on fly speed?