A tactic I am developing as a GM in response to the power of spells like Black Tentacles (and similar spells with 20 foot radius of effect) is to place my enemy NPCs (eNPCs) such that the radius of effect cannot cover more than a single eNPC at a time. 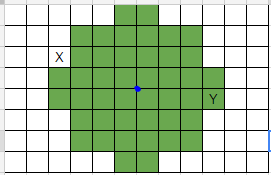 The significance of this diagram is how Mister X and Mister Y are positioned relative to each other, my question is whether it is correct that there is no way a 20ft radius of effect can cover both of them?

As I see it, anywhere a caster may try to move the centre of the radius to cover Mister X that will result in the area not covering Mister Y.

The purpose of this is not to make such spells have no effect, just limit the scope of their effect so single spells like the infamous Black Tentacles can't take so many out at once.

This relative spacing of eNPCs would still let them block off a wide area though there is a 10ft wide gap in the middle though that's easy to block off by various means such as caltrops or ready actions.

If a spell has a 20 ft. radius of effect, than it covers an area 40 ft. across. Supposing that the shortest distance between your NPCs is more than 40 feet, the spell will have no way to reach both of them.

Looking at your image, the NPCs are either 40 or 45 feet away. RAW, the characters are 40 feet away if you move diagonally. A houserule I've seen commonly* is to get rid of diagonal movement entirely, so I've included both images below.

Any time two characters are more than 40 feet apart they are safe. If you count using diagonals, it's possible that 40 feet will be enough (as in your image). 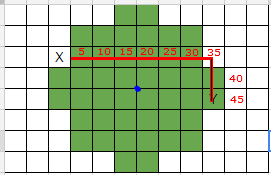 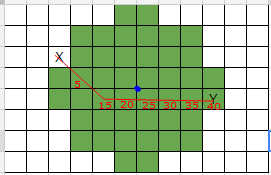 PCs may have other ways of keeping your NPCs within the area. They can push them in (through bullrush), use spells that hinder movement (like Grease), or position themselves to make moving disadvantageous. At some point the caster may use metamagic to enhance the area.

On the GM's side — how often do you have 45 ft. or more of open space on your grids? There may often be impossible obstacles or obstructions which hinder your movement, or the effects of AoE spells.

*
Similarly, people often "square" the effects of spells so that they neatly conform to a grid. No matter how you decide to project space, you'll have to accept some inconsistency.

Yes, as can be seen from your diagram it's geometrically impossible to place that area of effect template over both X and Y when they are in those positions, no matter where it's centred.

Not the answer you're looking for? Browse other questions tagged pathfinder-1e spells area-of-effect or ask your own question.

11
Is a spell's area set before damage is applied?
1
Are teleportation effects like Dimensional Door affected by difficult terrain?
14
Does a persistent spell effect cast on a moving platform move with the platform, or is it fixed in space?
2
When you cast a spell with “effect” entry, do you have to have line of effect to every portion of the effect to be created?
5
How does the Earthquake spell interact with total cover?
10
Are lights created by Dancing Lights spell one effect or many?
8
What is the point of origin for a square area of effect?
7
Glyphs of warding size