How to be a pirate in the third imperium?

How is piracy conducted in the Third Imperium? Does it all take place within 100D of a space port, as ships travel to or from their jump location? Or is there a way to waylay victims during a jump?

The goal for me is to find viable ways of doing piracy in space using traveller rules and Third Imperium setting. So far the only one I really see is doing it in vicinity of a hub.

In Mongoose traveller (v1) there is a small paragraph detailing how piracy works in that version.

You can also have them lurking around gas giants to hit freighters scooping up unrefined fuel to save money.

Another option is a planet or set of planets with very low law levels where there is no protection from authorities. But then you as referee would have to come up with a good enough reason why anyone would come to such a dangerous area.

From my rules reading (mainly from the original GDW Traveller), there is no way to either track or intercept a ship during jump. Though I don't recall any canon explanation of this, I always envisioned it as the ship being enclosed in a self-contained "bubble" of space-time created by the jump drive -- which would preclude any other ship in jump space (even if jumping simultaneously from the same starting point to the same destination) from detecting the jumping ship.

The actual practice of piracy depends on two things: the ability to intercept the ship, which in turn depends primarily on having superior acceleration and adequate delta-V (if you're using a system that tracks the latter; original Traveller didn't), and the ability to force docking, which generally would require disabling all maneuver systems (even if you can match velocity perfectly, you'd need extremely superior maneuvering to dock with a ship being intentionally tumbled, for instance). Note that destroying a ship in flight is much easier than boarding, because of the ease of preventing docking even with only attitude control; the whole point of piracy is to take value from the victim (whether in the form of salable goods and provisions such as life support consumables and fuel/reaction mass, or valuable information/personnel, or the ship itself, all of which would be lost by simple destruction of the ship).

Just as Blackbeard boarded and risked crew on ships he could have easily sunk from a standoff position, a space pirate must either board or force a landing/docking somewhere to loot the victim -- and the virtual end of large-scale piracy came when steam power required the pirates to steal compatible fuel, not just cargo (it's returned with the very high compatibility of modern fuel and very large cargo/ship values coupled with small crews and little on board protection).

The likely "best practice" for a pirate is to maintain a stationary orbit above a surface space port (or offset in the common direction of launch, if planetary rotation assist is used, as it ought to be). This will be well inside the 100D jump limit for any terrestrial planet, and gives a strong "high ground" advantage for maneuver, as when delta-V is tracked, there are a limited and predictable sheaf of economical launch trajectories even to the generic "jump distance". Second best is to be actually in port, with traffic control bribed to slot the pirates in behind a ship they choose to target, and have a ship with enhanced drives (higher acceleration) and delta-V capability. Wait for the target to launch, and then give chase from the ground up. This is more costly operation, however, and makes piracy less profitable and riskier.

Both of these methods target only outgoing ships, but that's as it should be: you won't get word of an incoming ship ahead of the ship, unless something about a ship with a low jump number and long journey is important enough to have word about it forwarded by faster ships or X-boat.

Pauls answer got me thinking about the optimal placement for a pirate to catch ships jumping into a system. I assume that incoming ships will arrive at a random location 100D from their destination.

If they pirate waits at 100D where their targets are likely to come out of jump, then they can only catch targets that happen to arrive within their weapons range, assuming both pirate and target has equal in-system drives. Assuming Earth this gives the pirate 1/160 chance of catching any given ship that arrives in the system.

If the pirate waits closer to the starport then the pirate can use the time the targets spend moving towards the starport to move into a intercept position. Effectively giving them a much much much larger coverage area. I haven't figured out the optimal placement, but from my calculation using earth I believe they should have more than 1/10 chance of catching a incoming ship with equal drive as them selves. 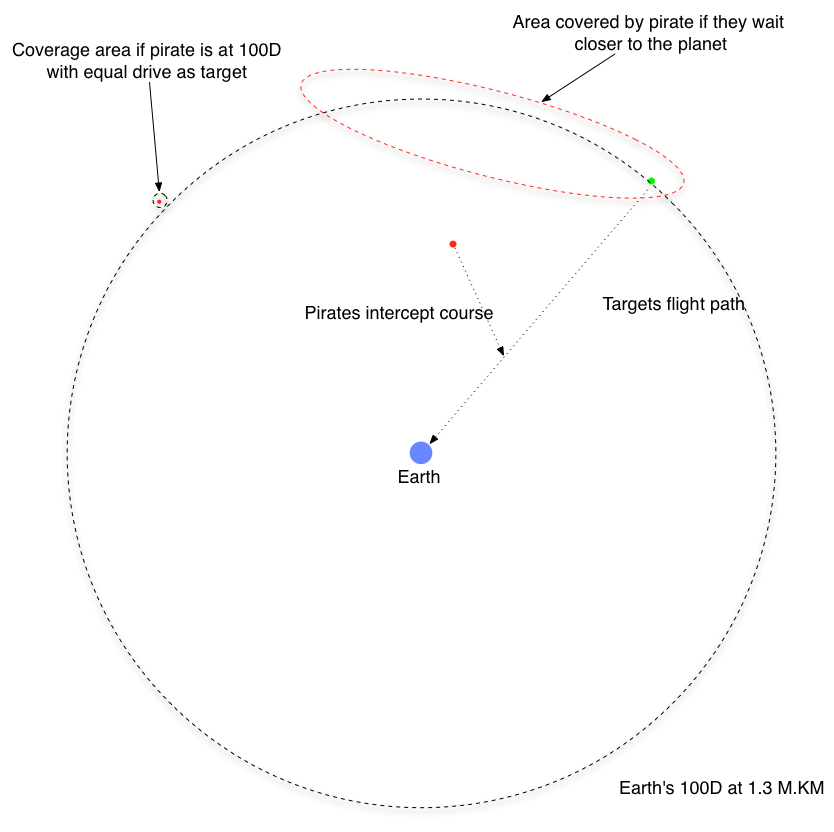 From my memory of original GDW Traveller and various scenarios and tournaments Jump Space is "safe" unless the GM invents a technology to suit the game.

Piracy as I encountered it tactically was conducted by mainly non-jump capable ships. For a given mass, adding jump capability disadvantaged maneuverability and weapons payload.

While looking up some stats I came across this http://wiki.travellerrpg.com/System_Defense_Boat#History_.26_Background_.28Dossier.29

SDB's were developed on the principle that a non-starship, because of the additional armament made possible by its lack of jump drives, can ordinarily defeat a jump-capable starship of equal tonnage.

This means that piracy could work on either inbound or outbound journeys. Because why would the imperium have SDB's if they didn't work?

The second way piracy can work is the inside job where passengers and/or crew sabotage the target.

A third path is mutiny by a crew and then a pirate's life for me.

As for tactical combat & boarding there is an element science fantasy about it. We must assume that firing an energy weapon, missile or projectile weapon is not totally destructive to the target.

Once you allow for that you've got the ship-to-ship model instead of an aircraft-to-aircraft model (where a single hit destroys the target).

Now you can get fancy.

There's another option I was thinking of. A pirate can stand off from a primitive (Class D or E, or a small Class C) starport, wait for someone to land, and then do their pirating.

In a related note, one fellow came up with what sounds like a reasonable way to actually do the pirating: threaten the ship in exchange for their small craft. Then run away, fence the craft for perhaps 10% of its value, and live well for a year or two.

But in the end, piracy is exactly what it feels like: a cool plot hook for science fantasy games, for swashbuckling in a Space Age of Sail. It can be a lot of fun. And the referee can bring it to life.

5
Is there anything that lets me quickly figure out the distance from a safe jump point to the starport?

3
How can you fight with two weapons?
5
During character generation should all PC have the same number of terms?
7
If a character has a mishap during a term and must leave the career how quickly can he re-enter the same career and will he retain his rank?
6
What is the formula for calculating in-system traveling time?
5
Is there anything that lets me quickly figure out the distance from a safe jump point to the starport?
5
What is the proper name for the 2016 edition of Traveller by Mongoose?
4
How exactly does GURPS Traveller setting material differ from OTU?
10
What is the application of symbols in the cultural extension of UWP?
8
What does the “bulky” trait mean in Traveller 2ed?
3
How does the “Burst” trait work?