Is there anything that lets me quickly figure out the distance from a safe jump point to the starport?

While reading the core rulebook I always assumed that the relevant distance for jumping into a system was the diameter of the systems star times one hundred, and I got the impression that it would take a few days to get from safe jump distance to the spaceport. However, while I was doing some calculations based on @paul-gilfedder great answer to this question I realised that Earth is orbiting outside of our stars diameter times one hundred. 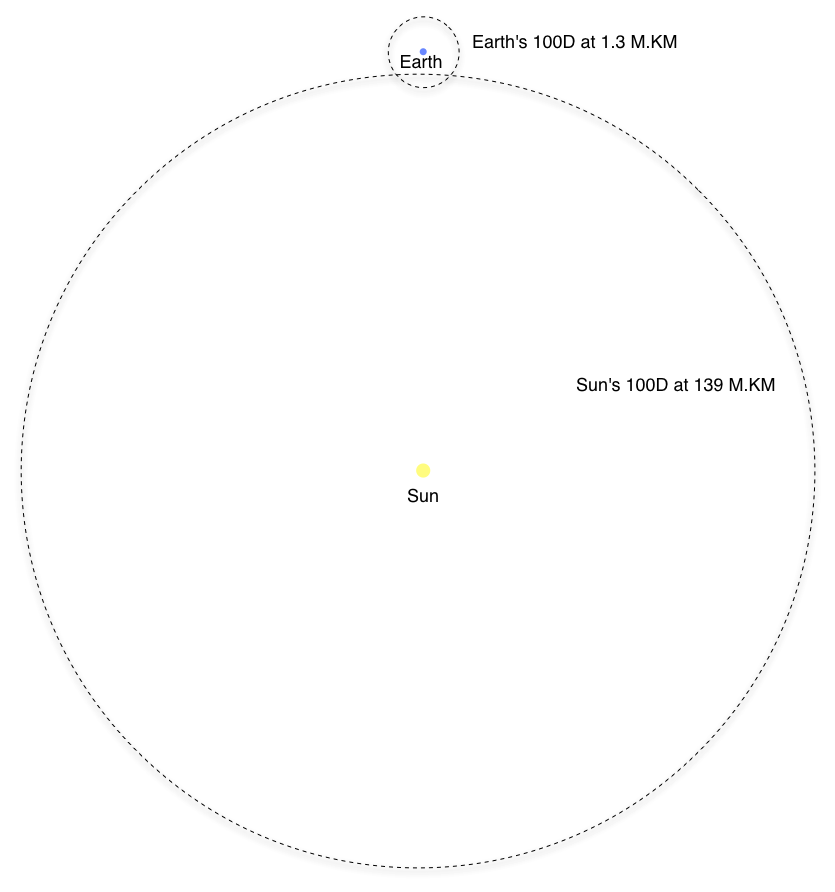 I had been assuming that if Earth had a spaceport it would take 68h with a G1 drive to get from the spaceport to a safe jump distance, and that that was pretty standard for any solar system. However, if I understand this correctly it should take only 6h 20min to get from the jump point to Earths potential starport since it is only 1.276.000 km and not 140.000.000 that I assumed.

After this longwinded intro I get to my question: When the source material talks about a system and it's main planet/starport is there any information included that lets me know what the travel time from safe jump distance to the spaceport is, or a way to infer it from the UPW? Makes a huge difference if the planets orbit is inside our outside of the stars 100D. For instance safe jump distance to Venus would be 32.000.000 km, which is 25 times that of Earth, because of this.

To the best of my knowledge, no edition of Traveller has ever forced players take into account the sun's diameter. Possibly this is just an oversight, but having read the original CT LBBs and seen the detail the designers went into, I suspect it's actually just because it practically never applies. I can imagine a few reasons why this might be the case (the goldilocks zone is always outside of a sun's hundred diameter limit, the gravitational force of a sun is constant enough that you can take it into account when calculating a jump, the designers just decided it wasn't worth it, the 100 diameter rule of thumb breaks down when applied to masses that large), but all such guesses are speculation; The important thing is that no edition of the game that I'm familiar with bothers with this particular detail. I therefore recommend you ignore it; It doesn't add much to play in any case.

And yes, there is a way to work out the hundred-diameter limit for any given world: Just look at its UWP. The second digit is "Size" and corresponds to a particular planetary diameter; I don't know which edition you're using, but there should be a table detailing which size values correspond to what diameters in the rules for generating worlds.

There have been discussions on Citizens of the Imperium forums and the Traveller Mailing List going back decades on the question of what the 100D really means. Marc was cagey about expressing exactly what the physics was (likely because 100D was an easy number for a game and was made up without any real deep idea of what the physics was - it just worked in a gaming sense to prevent people jumping in on top of planets and jumping out from them).

Does it mean 100 diameters of the planet you are leaving?

Does it have to get you 100 diameters out from the star or stars? (Contrary to GMJoe's answer, depending on star type and the habitable zones, you can have habitable worlds far inside the solar 100D limit)

If you had a binary, trinary, etc. system, the 100D a limit for each star might need understood.

Some large satellites or other large bodies in the inner zone may also be an issue at times.

There was talk about using tidal force as a proxy for 100D and looking for it to drop off to 1% from a system object. That would be (if I recall) tying it to gravity.

Marc Miller was quoted somewhere I do not recall at this moment but he indicated that it was not a gravity thing though -> it is some property of matter instead of mass.

This leads into other discussions of jump shadowing (if I recall the term) - I want to jump from A to B in system or between systems - if there's a large body with a large mass shadow being cast that my jump will take me through... what happens? Do you get forcefully precipitated from jumpspace? Or blow up? Or nothing? Some argued that certain jump failures (misjumps, damage, missing ships, etc) could perhaps be a result of not correctly navigating around these sorts of effects. But there is no official view I'm aware of on these ancillary issues (although I bet 'simpler is better' would be the answer if we asked Marc).

I suspect the simple answer of 100D from the main planet is enough, but other ways to look at it could offer a lot of interesting scenario ideas.

I know citations would help, but some of this stuff goes back over 15 years and some of the actors and the threads or sites may not even be around anymore.

Is there any information included that lets me know what the travel time from safe jump distance to the spaceport is, or a way to infer it from the UWP?

At the end of the day, it only matters if the game's plot hinges on it. And I suspect that it should be rare.

That said, there is one potential way to infer it from the UWP only: if a world looks HABITABLE -- and by that I mean an atmosphere around, say, 5 though 8 -- then look closely at the Primary star. If it's clearly larger-but-cooler than our sun (for example, a red giant maybe?), then that world could be handwaved to be inside the star's 100D.

By how much? I don't know. And your particular game probably doesn't care. Roll D x D hours, perhaps. Or develop something complex based on the star's class and color. Just remember that unless it impacts the game, it doesn't matter -- and it probably usually shouldn't impact the game.

Note: there is a trade code in Traveller5 called "hellworld" which could be interpreted as the world being inside the primary's 100D limit. That code is present in Travellermap entries.

12
How to be a pirate in the third imperium?