Help me with my battlefield design [closed]

One of my weaknesses as a DM is probably battlefield design. I often forget about this completely, and have to make up a map on the spot when we roll initiative. I try to avoid this before major plot battles, but since I don't explicitly design my battlefields before-hand very often, I'm not sure how to handle it.

As an example, let's talk about the penultimate encounter of my campaign. The party will be fighting the Skeleton King created in this previous answer. I don't want the quality of the encounter to rest on the quality of a map I make up on the fly.

This specific encounter will be in the ruined throne room of Castle Never, from the Neverwinter Campaign Setting. Castle Never is described as a "big, hulking ruin" that was largely destroyed in the cataclysm. The cataclysm was a combination earthquake and firestorm after a volcanic eruption prompted by a fire primordial having a nightmare. The cataclysm "struck it hard, toppling towers, collapsing walls, and starting fires that burned throughout the structure".

As far as the hazards go, this area has been affected by the spellplague, which alters reality in strange magical ways, so they can be pretty crazy. Bubbling liquid bricks that float upward, coming from nowhere, distortions in gravity, weird sounds and lights, alterations to the functioning of magic, whatever. There's also a lot of undead activity and necromantic activity in the area, as well as some fungal growth from a nearby colony of myconids.

In both of those fights, I think the battlefield is too open. The players don't really have to engage with the skeletons too much, and can mostly kite the king.

I'd like something a little more claustrophobic, like the fight with Queklain in Final Fantasy Tactics. Here's a video of that fight (actual encounter starts at 1:20). I like how the raised area in that fight makes a big difference in positioning, despite being fairly simple.

It would also be neat to have some differences in elevation and perhaps hazards, caused by the ruination of the castle. This should favor the king by making it easier for his skeletons to mob the party, as well as making it possible for him to hit multiple characters with his special attacks. Several of the party members have abilities that allow them to shift themselves or allies, and I'd like them to have to take advantage of that in order to overcome the battlefield.

The party consists of five level 10 characters: a human Cavalier (Paladin tank with a halberd), a kobold Invoker (lots of shifts and forced movement, with radiant damage), a genasi Warlord (Int-based tactician that grants attacks), a changeling Executioner (Assassin with both hand crossbow and rapier, multiclass Warlock), and a half-orc Slayer (charging spear fighter, my GMPC).

The party has excellent defenses with good attack ratings. They can do a lot of radiant attacks, and the paladin is good at stunning enemies. The Invoker and Warlord can both move their allies around the battlefield, and I think almost everyone has an ability that lets them shift multiple spaces.

The Executioner can climb walls like Spiderman, and the Slayer is an amazing jumper. The Warlord can fly.

What approaches can I use to address the issues I have with encounter design?

So, in the context of the example encounter, please explain how I can create a battlefield that favors the skeleton king's attacks, forces the party to engage with his minions, and gives the party ample opportunity to take advantage of all their movement skills?

I'll give my personal hints when creating encounters and maps, and hope it helps you.

First off, I start with a blank area of 30x20 squares. Most maps end up smaller than that, but rarely I need something larger, so that is a good starting point. The reason I don't start with a square area is because it allow me to start thinking on "Party entering point" and "Enemy starting area" on opposite sides of the field. As I advance, most of the time I move the enemies closer, but I like to keep them starting very far apart, so if the party lose initiative en mass, they are not fully surrounded in the first turn.

Next, I think about what would be the theme of the encounter I want to do. And that part is your whole question, so I'll skip it.

After that, I create the fight in a vacuum, and see how my party would make it. Also, don't roll dice. Assume everyone roll 11 on d20 (your boss should be able to hit the highest natural defense in your party with a 11. Normal mobs may not, but that is ok), and average damage. Usually, they would win easily. That is expected. If your party can't win in a blank slate, then you need to adjust numbers.

The point here is: Once your party can win, start to think about their standard strategy, and how plain and simple terrain can benefit the monsters while working against your party. This can be as easily as putting some difficulty terrain that the monsters can ignore either because they can bypass it (slippery ice against Icewalk monsters, knee-deep bog water against swampwalk monsters, rubble against flying enemies, etc), some cover for your ranged monsters (even something as simple as a pillar), or even some areas of dim light/darkness (concealment don't work against area and close attacks, but do wonders against PCs that have Ranged and Melee as their main attacks).

Your party is composed of two melee attackers (Paladin, Slayer), one ranged (invoker), one variable (rogue), and an incognita: if your Warlord can order the Invoker a ranged basic attack, then it is two variable. Otherwise, it is three melee). Anyway, this means that over half of your party prefer to fight in close combat. Since your skeleton king is a melee warrior, this means they have the upper hand already. Once someone is engaged, and both combatants prefer melee combat, they rarely move away, unless they are trying to avoid a flank or hindering terrain. So, you need some incentive for your party to want to disengage with the skeleton king, while at the same time, engaging with his skeleton minions, while he walks and teleports around chasing the group.

The easy answer? Add a damaging/debuffing aura on your boss. But that is not terrain, so let's look at terrain possibilities.

Your boss want people to engage him. The best way to ensue that, is fighting on tight quarters. So, let's add a simple curve into our map. Make it somewhat L-shaped. Keep your enemy area in the small corridor. This will force the party to advance if their ranged attackers want a chance to get the boss in line of sight. If you can add some minion variety, make sure the ones without a ranged attack stay in the cover with the boss. The point here is that you want the invoker to come closer.

Since the area is surrounded by cataclysm, add a necrotic zone: Creatures take X necrotic damage (as long as the maximum damage is not enough to kill the minions, any value is fine. They add up in the long term). Make the junction point of the L-shaped area be filled with this thing, so once the ranged PCs get close enough, the boss will force them to fight inside the zone. We can also add the theme that the necrotic vortex suck up light around, so that the area adjacent to them are dim light, to "discourage" ranged attacks. Notice that dim light is ignored by any race with low-light vision and darkvision (like your kobold invoker), but at the same time still add flavor. 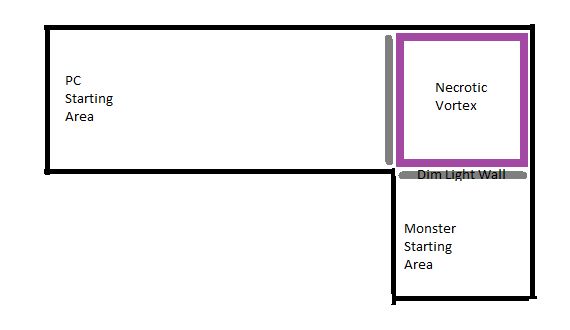 While I did the Necrotic Vortex as a solid square, it is only to have a simple representation on the map. It may be a bunch of one-square zones, or 2~4 4x4 damage zones. You will have time to think about them later.

If you want your party to move around, make sure that some enemies are capable to either disengage with ease (large shift, non-move shift, teleport), forcing the PCs to go where they don't like (push, pull, slide), or messing up with their action economy (knocking prone, daze, immobilize, slow). Always remember that if two creatures want to fight engaged, the natural course of the fight is for them to engage and stop moving.

You might want to make the ground collapse at some point (my usual advice is to mess with the map at the start of round 4), to make the flying warlord and the spider-rogue shine a bit by cleverly avoiding them. Just make sure to also hit some minions at the same time, so it "feels" like a natural occurrence, not something made specifically to hit the PCs.

The rest of the setup involves going back and forth between the map and enemies. Add some minions here, allow the boss to spawn a new minion at range Y instead of X, make this or that attack being able to push the target 2 squares, this will immobilize them if they are in the raging vortex, etc.

I hope this help a bit.

7
How can I recreate King Leoric as a solo monster for a level 7 party of five?

9
What are some "ideal" marching formations?
9
What do characters know about the battlefield?
1
Help with Defender Aura at-will power
13
Under What Circumstances Do Additional Creatures Add to EL?
7
How can I recreate King Leoric as a solo monster for a level 7 party of five?
10
How do traps affect encounter design budgets?
18
Encounter design and XP thresholds
8
How to design a level 1 encounter with 7 level 1 characters
6
Balancing Encounters around a very proficient Necromancer