Does Scion of Humanity allow for Dual Talent?

This may be more specifically a Herolab issue, but I am unclear as to whether the mechanics truly work like this...

In trying to build an Aasimar, I added Scion of Humanity. Doing this (in Herolab) opens up all of the Human racial traits in the UI. This is the first point in question: "should this happen"? The only statement I've found (of use) through googling is this guy who states:

They can count as "human" through the Scion of Humanity race-trait, which opens up most EVERYTHING that a 'human' would have access to (i.e. a feat which lets 'humans' count as any other race for starters).

Hinging on that, I was able to add Dual Talent, a human racial trait, which states that "This racial trait replaces the +2 bonus to any one ability score, the bonus feat, and the skilled traits." Aasimar start with Skilled, so that applies, but a bonus feat (as humans have) never appeared when taking Scion of Humanity, so this becomes a little sticky: how does one replace that which you don't have?

The third issue is that with Aasimar heritages, which function nearly identically to the Dual Talent in that it adds +2 to two different Abilities. Compounded on this is the Aasimar Abilities, which beyond basic Skill modifiers, also allows you to add +2 to one Ability.

Assuming you wanted to amp Strength, this adds up to a total of +6 Strength without spending a single Ability point. This feels wrong, but (by golly) sure would be nice if it's true. 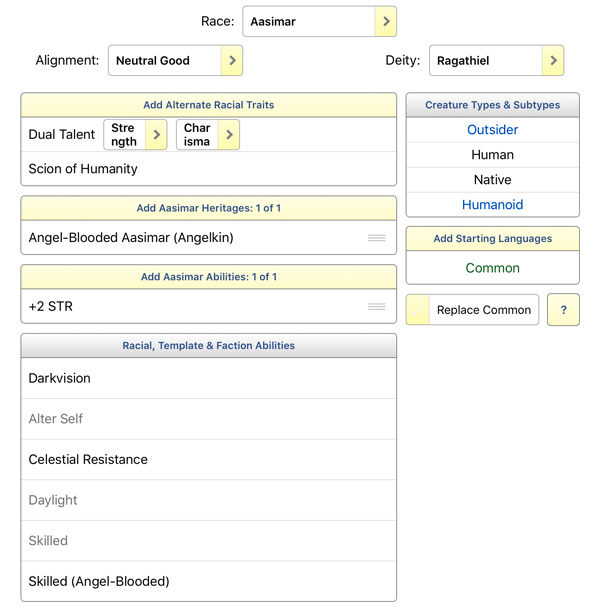 So while the alternate racial trait scion of humanity says

Some aasimars' heavenly ancestry is extremely distant. An aasimar with this racial trait counts as an outsider (native) and a humanoid (human) for any effect related to race, including feat prerequisites and spells that affect humanoids. She can pass for human without using the Disguise skill. This racial trait replaces the Celestial language and alters the native subtype.

replaces the +2 bonus to any one ability score, the bonus feat, and the skilled traits.

Players may choose one of the following six heritages for their aasimar characters in place of the traditional aasimar racial features. Each heritage presents new ability modifiers, spell-like abilities, and skill modifiers that replace the default aasimar racial traits, as well as a pair of custom traits. Each entry also discusses the most common (though by no means ubiquitous) personality traits, physical features, and places of origin of aasimars with that particular heritage.

4
Is a Racial hatred to all Humans enough for an evil alignment?
21
Could someone explain traits to me?
7
Do the Elf Blood racial trait allow you to fulfil "being an elf" prerequisites?
12
Does an Oni-Blooded variant heritage Tiefling potentially get +4 Wisdom?
12
To what extent are half-breeds treated as humans?
5
Would reach as a racial trait for my homebrew Mutant race be unbalanced?
10
How does Leadership work for a Vigilante?
9
Customizing Your Origin and Reincarnate
4
Racial Traits for a Shackleborn/Kyton-Spawn Tiefling?