What is a straight line for running?

You must run in a straight line and you can't run over difficult terrain or obstacles.

If I wanted to run at a non-45 degree angle, do I use a line from each starting corner to each ending corner in order to determine whether I hit difficult terrain or an obstacle?

How do I measure the actual distance at strange angles?

I would do the following: 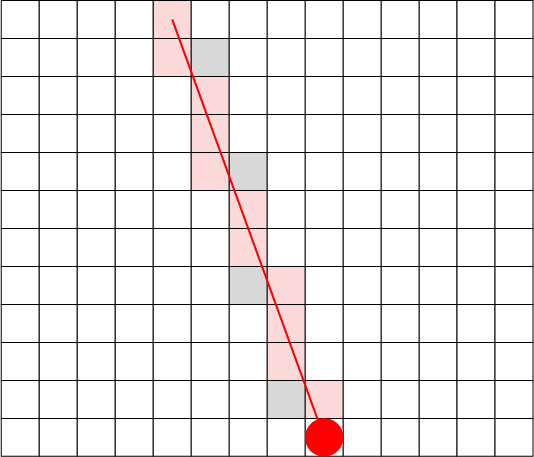 I wouldn't worry about drawing lines from each corner to each other corner, since the rules don't demand any such strict things. If you're running and you need to make a small arc in order to avoid a pit of snakes, you can do that just fine. What you can't do is suddenly make a 45 degree turn and keep going without losing momentum; that's what the "straight line" rule is meant to model.

1: It's strictly academic which of the two lateral squares you choose; it will still be a straight line. As long as you pass only through squares that have the line inside them, you're fine.

Not the answer you're looking for? Browse other questions tagged dnd-3.5e movement or ask your own question.

9
Flying straight from prone
36
What can I do when the GM dislikes my choices in play?
2
What is the correct movement speed for crawling, running, etc.?
4
Penalties involved in movement scenario
16
Must the Orc's Agressive movement be in a straight line directly toward the enemy?
3
When spells can be moved, must it be in a straight line?
2
Is the distance for the errata’d Scout skirmish ability a straight line, or distance travelled?
9
What is the longest distance a 13th-level monk can jump while attacking on the same turn?
1
According to the Rules Compendium, can I charge through a square that would hamper my movement as long as it isn't difficult terrain?
34
What is the lowest level at which a human can beat the 100m world record (or: the presumed human limit) without using magic?