What are the statistical implications of doubling damage on crit instead of doubling the dice rolled?

This mostly just bugs me on principle, but I was curious what doubling the value rather than doubling the dice does mathematically. Does it actually make a difference? Is there a greater chance to hit extreme ends of the range of values (low and high)? Does the amount and type of dice create greater inconsistencies between the two scenarios?

When you double the damage rolled instead of doubling the dice rolled, you create a more evenly distributed curve. Using either method, you have the best odds of rolling the average damage for the dice you are using but in the doubled damage you are far more likely (16.7%) to roll the average than when rolling double the dice (11.3%).

You can also see in the below diagram that when you double the damage rather than the number of dice rolled, you have a much higher chance of rolling the maximum or minimum damage possible (2.78%) compared to almost no chance at all (0.08%) on doubled dice. Doubling the damage rolled also has the effect of eliminating all possible odd-number results.

The standard deviation from the mean in a doubled damage scenario is 4.83, whereas when you double the dice rolled the std dev is only 3.42 points from the mean. To put this into perspective, it means that when you double the rolled damage you are more likely to land in the range of 14 ± 4.83, whereas when you roll the doubled dice, you are more likely to land in a tighter range of 14 ± 3.42.

The end result: damage results are more varied by doubling the damage rolled with increased odds of rolling either min or max damage when compared to doubling the number of dice.

You can reproduce the following table on anydice.com by inputting: 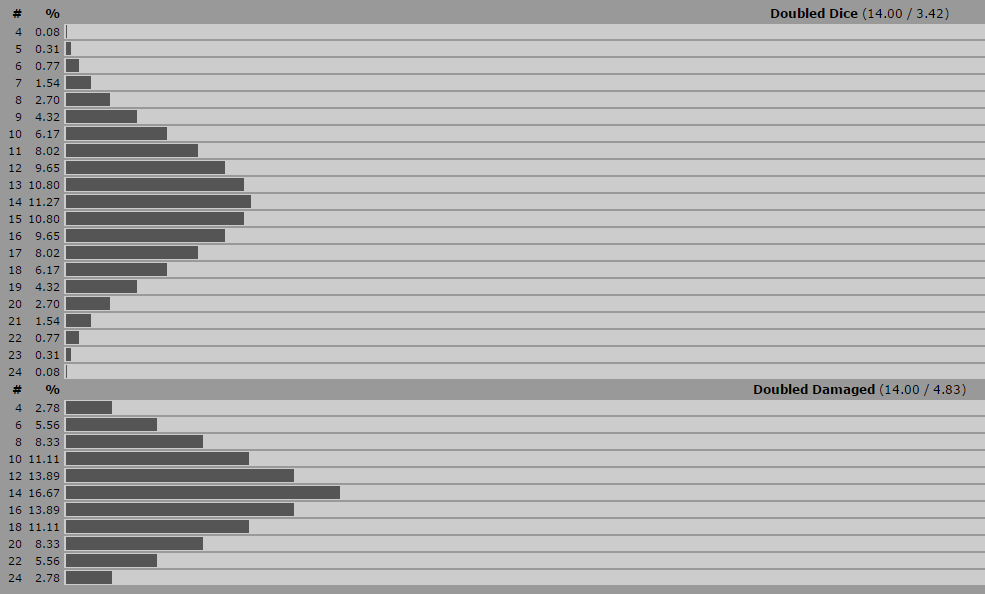 The differences become more apparent when we graph the numbers together along a curve. Note that there are no yellow nodes on odd numbers — this is because you cannot have an odd-numbered result when doubling the damage (any number multiplied by two results in an even number).

The chart below can be reproduced by using the two anydice functions above and selecting the graph view, normal data options.

One more graph to really send the point home. In this example, we are comparing a simple 1d6 damage critical:

Anydice.com code for this table:

From this table, it becomes apparent that your damage result varies greatly when doubling the damage (though the actual number of possible results is cut in half). For each possible result, we have the same odds, as expected — a 1d6 has the same 16.667% chance of turning up any given number, and that doesn't change when we double the results of the 1d6 roll.

On the other hand, it is apparent that rolling Doubled Dice results in a much smaller standard deviation from the mean result of 2d6.

@LegendaryDude has provided a solid answer about the effect on the numbers, however, what is more important is what those numbers mean in play.

A larger standard deviation means that there will be more extreme results, in a sense, while there is overall no change to the average, individual rolls are "more random".

Randomness hurts PCs more than monsters since over the course of an adventure or campaign the PC is subject to far more attacks than any individual monster. This is because the PCs take part in every fight; the monster generally in only one - the one where the PCs kill it, or, more rarely, it kills the PCs. Because the PCs receive more attacks, there are many more opportunities for them to suffer the extreme effects; the wrong extreme effect at the wrong time will kill them.

To illustrate, I have considered a 2d6+0 attacking a first level fighter with 12hp.

This anydice script shows the results of a single critical.

Not the answer you're looking for? Browse other questions tagged dnd-5e dice statistics .

60
How does extra damage work for critical hits?
11
Instead of rolling for every creature hit by a spell, can we reasonably use a single additional die for the number of hits?
12
Damage Resistance / Vulnerability: Double Damage or Dice?
-4
What is the standard ruling for critical hits?

4
What is the average outcome of this opposed roll resolution mechanic?
35
Is my Paladin stacking Smite spells correctly?
12
Do you roll an extra damage die for Hex if you crit with one beam of Eldritch Blast?
10
How do critical hits and bonus damage interact?
28
How does one calculate the distribution of the Matt Colville way of rolling stats?
10
What is the most damage one can do with a cantrip in one turn?
7
What are the Effects of "Maximizing" Damage on an Effect?
26
What is the ideal way of emulating a full dice set using a single d20?
4
How do Hard or Extreme rolls vs increasing penalty dice affect the odds of success or failure?