Do characters provoke opportunity attack when they leave another character's reach who is not facing them?

"You can make an opportunity attack when a hostile creature that YOU CAN SEE moves out of your reach."

In 5E do you have to specify which way your character is facing at all times? If an enemy who is behind him leaves melee range but his back is to him does that enemy provoke an opportunity attack?

Are enemies within five feet and 360 degrees of a character considered to be within reach?

For example... Kruska and Atone are attacking Dip. Dip is facing or only attacking Kruska. 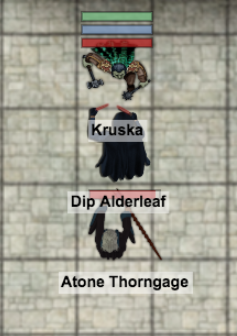 Then Atone moves out of Dip's reach (melee range 5 feet) to engage a silly looking wizard. 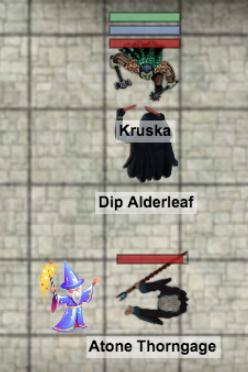 Does Atone's move provoke an opportunity attack from Dip even though he's not facing him? Is he assumed to be able to see him?

There are no facing rules in 5e by default. Thus one provokes an OA leaving an opponent's reach no matter how you imagine the characters are faced. The reasoning behind this is that the round represents six seconds of movement: thrusts, parrying, bobbing-and-weaving, &c.*

In your example, the answer is: yes, Atone would provoke an OA from Dip.

If you really want facing turn to the DMG. P.252 describes "Optional Rule: Facing." However, this optional rule says nothing about OAs. In my opinion it wouldn't be much of a stretch to discuss a reasonable modification to include OAs if your table chooses to use these optional rules.

*-This is explicitly stated at the beginning of "Movement and Position" (PHB p.190): "In combat, characters and monsters are in constant motion...." It's also the natural inference drawn from the description of "Other Activity on Your Turn," the existence of reactions, the inclusion of DEX mod into some ACs, and the first paragraph of "Opportunity Attacks" (PHB p.195).
Share
Improve this answer
edited Jun 26, 2017 at 12:39
answered Apr 12, 2016 at 21:38

1
Interaction between line of sight, enemy reach and opportunity attacks