Is there any monk-compatible light armor?

I'm searching for armor that does not prevent a monk from getting his bonuses. I do not care if the armor has 0 armor bonus, because I'm interested only in enchantments. It should contain some kind of description that specifically allows monks to wear it.

Although not light armor, the bracers of armor can accept magic armor special abilities

The Arms and Equipment Guide says

A character who has the Craft Magic Arms and Armor and Craft Wondrous Item feats, as well as mage armor and all the other prerequisites necessary, can add the armor special abilities... to a set of bracers of armor. The cost is the same as for adding a special ability to normal armor: an increase in the effective bonus of the bracers. Just as magic armor can never exceed a +8 [Note: Should be +5] enhancement bonus, bracers of armor never provide more than a +8 armor bonus. However, special abilities can increase the effective bonus as high as +13 (bracers +8 with an ability valued at +5, such as heavy fortification). (130)

Although not explicitly stated, bracers of armor don't interfere with a monk's special abilities, the armor bonus coming as it does from a pair of magic armbands. (The DMG's NPC monks (118-9) even have bracers and don't suffer because of them, for example.)

...Or maybe wear a beekeeper's outfit

This requires a generous DM. The beekeeper's outfit (Arms and Equipment Guide 22, 29) (9 gp; 4 lbs.) is not armor yet it grants the wearer a +6 armor bonus to Armor Class "against attacks from stinging and biting creatures that are size Fine" (29). That aforementioned generous DM may rule that because the beekeeper's outfit provides an armor bonus (albeit one that only functions in very specific circumstances), a masterwork beekeeper's outfit is eligible to receive magic armor special abilities. This isn't something I'd count on, though.

Just for completeness, on the question of monk-compatible light armor (rather than just a possibly-valid target for magic armor properties, as with the bracers of armor or beekeeper suit), I’m going to say probably not.

And then there is gnomish twist cloth. Races of Stone presents this “exotic armor” (a concept almost unique to that book1), which is a light armor that has a +0 armor bonus to AC, but no maximum Dexterity limit and 0 armor check penalty. If you have the Exotic Armor Proficiency (gnomish twist cloth) feat, you even get to apply any AC bonus it offers (from magical enhancement) to your touch AC, which is pretty neat albeit not really a good use of a feat. But it still counts as light armor, and makes no provision for working with monk class features, even if you have the feat.

This is a difficult question, since I'm not exactly sure what you are looking for. The other problem is that you can craft pretty much any enchantment onto anything to make a Wondrous Magical Item (so long as your DM is ok with it). If you're looking at making say, a Cloak of Light Fortification, it would be a Wondrous Magical Item. The guidelines in the Dungeon Master's Guide (pg 288) states the following:

Wondrous items that don't match the affinity for a particular body slot should cost 50% more than wondrous items that match the affinity. Compare the boots of teleportation with the helm of teleportation. Unless you are intentionally aiming for a truly oddball game, avoid patently absurd combinations such as eyeglasses of giant Strength at any price. 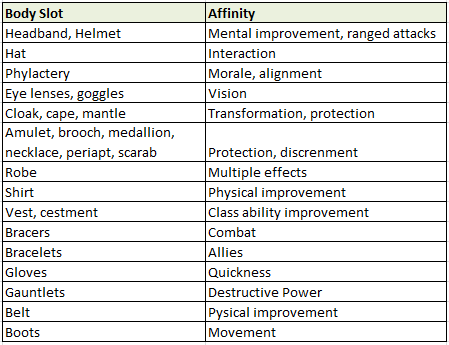 Any other sources I found to help I'm not convinced of their veracity. There's a Pathfinder site that confirms that Bracers of Armor can be enchanted with armor enchantments here.

Finally I found a feat on the danddwiki. I'm pretty sure that this is a homebrew though, as I was unable to find it in any source books I had to hand.

You have been initiated into the ancient prancing crab style, which trains acrobatic maneuvers while armored.

Benefit: You can use all monk class features even while wearing light armor. Yet, if you do so, your monk bonus speed and your Wisdom bonus to AC are halved.

Normal: When wearing armor, a monk loses her AC bonus, as well as her fast movement and flurry of blows abilities.

Special: You can take this feat as a monk bonus feat at 1st, 2nd or 6th level. You do not need to fulfill the prerequisites to take it as a bonus feat, but note that this would mean suffering armor check penalty to attacks.

Look in the Magic Item Compendium. While armors are not available for monks, there is a huge section on clothing, most of which does not interfere with a monk’s abilities.

Not the answer you're looking for? Browse other questions tagged dnd-3.5e monk armor or ask your own question.

8
Do the AC Bonus (Ex) class abilities of monks and swordsages stack?
1
Is there a way to use Flurry of Blows while armored?

2
Is Magic Armor with an Enhancement Bonus over 4 Automatically Masterwork Armor?
4
Do Unchained Monks have weapon proficiency with all monk weapons?
3
Druids, wild shape, and armor check penalties
8
For the purposes of the Monk's AC bonus class feature, does the Gunman's Duster count as armor?
4
How does the AC bonus of a Monk's belt work when worn by a non-monk?
3
Can primate animals wear armor?
1
If a spellcaster can wear light armor without suffering ASF, how does mithral medium armor work?
11
What monk features are disabled whilst wearing armor?
3
Can a Monk with the Unhindering Shield feat use Heavy Shields effectively?