The best damaging Wizard cantrip2 (Firebolt) does 1d10 damage at the beginning. Compare this to 1d8+3 of a Rapier. This is a 36% advantage, with Duelist this goes up to 72%. On level 4 the gap is increased again, as the ASI provides a hit bonus to both, but a damage bonus to weapons only.
At level 5 both values double, so the relative difference does not change.
At level 11 both the Wizard and the Fighter get a 50% improvement, it is more complicated for Paladins and Rangers, but the ratio remains about the same.
From level 17, Firebolt does 4d10 damage, that is 22 on average, while a Rapier in the hands of a Duelist Fighter is 3x(1d8+5+2)=34.5 (46 from level 20) damage, almost double. 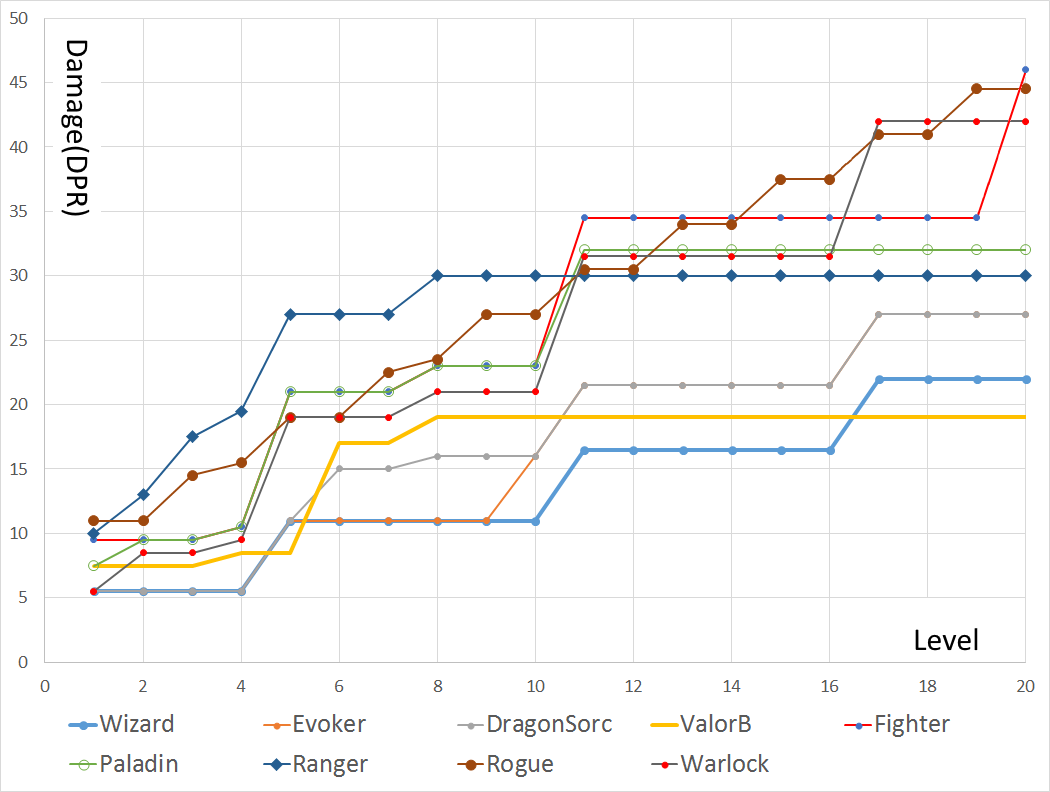 Firebolt is in the graph, so I will compare the new cantrips to that.

Toll the Dead: It is great, at least better than Firebolt, unless you are fighting necrotic resistent creatures, and those are usually easy to recognize. Most casters tend to open with the big guns, and change later to cantrips, so I consider it a simple 1d12 damage, wich is 18% more than Firebolt, still not enough to catch up with the Ranger, the least damaging martial class.
Evokers with Potent cantrip really like this one, along with Clerics, who just received their first decent combat related cantrip.

Sword Burst (also Word of Radiance): 1d6 damage is really small, and with diminishing returns, you need to stand next to a lot of enemies to be competitive. Which is generally a bad idea.
If we calculate with full damage to the first target, half to the second, and so on, you need 4 targets to get ahead of Toll the Dead, which can be used from a safe distance.
Celestial Warlocks add their Charisma to the damage with Word of Radiance at 6th level, but it is still not enough to catch up with Eldritch Blast, especially if they have Agonizing Blast.

Green-Flame Blade: You can rely on this one (as opposed to Booming Blade). The problem is that while it requires an attack roll, it is not an Attack action, so will not enable e. g. Two-Weapon Fighting. The extra damage is small, about 1.5-2 on levels 1-4. On level 5, you deal 1d8 additonal damage to the primary target, and 1d8 + SAM (Spellcasting Ability Modifier), about 8.25, while the Fighter deals 10.5 twice.
Green-Flame Blade is only a good idea if you do not get Extra Attack, but are likely to hit with a weapon, like a Cleric.

Booming Blade: It is a trap. DnD5 is one of the most static games tactically3, so the extra damage will rarely trigger. The base damage is identical to Green-Flame Blade.

3) Unless you use the Flanking optional rule (and I have never seen it used), there is no incentive to move once you are in melee reach, but a lot of incentive to stay put, because of Opportunity Attacks

Not the answer you're looking for? Browse other questions tagged dnd-5e weapons optimization damage cantrips .

113
What are the most and least-resisted damage types?
61
Are Imps incapable of speech or is my DM messing with me?
53
What are the downsides to multi-classing?
90
What does upper-case-A-Attack action vs. lower-case-a-attack mean?
71
Is the old "Linear Fighters Quadratic Wizards" problem still around in 5e Basic?
12
Is this house-rule removing the increased effect of cantrips at higher character levels balanced?
36
How can I make combat less static in D&D 5e?
26
Are there viable crossbow-using builds without Crossbow Expert?
16
Should a high elf wizard use weapons instead of cantrips?
27
What is a good way to challenge a Warlock with the Agonizing Blast invocation?
See more linked questions

24
Twin hand crossbow Fighter: is this build valid?
10
Can I draw a weapon between attacks?
21
Character Optimization: highest DPR with the Shillelagh cantrip
5
Is the homebrew weapon attack cantrip 'Vampiric Assault' balanced?
7
Maximizing Wisdom-based ranged attacks per round
15
Do the UA thri-kreen's 4 arms enable any higher-damage weapon combinations?
1
How does the Haste spell's extra action interact with the Bladesinger's Extra Attack feature and with cantrips that do "one weapon attack only"?
18
What deals more damage on a weapon, +1 to hit or +1 to damage?