How do spell-casting monsters prepare and recover their spells?

For example. a Spirit Naga is a "10th level spellcaster", and "has the following wizard spells prepared". The text explains that the DM may substitute other spells for the ones given, but it is not clear whether such substitutions are permanent for that individual or simply represent the creature's selections from a spellbook (like a wizard) or other mechanic. And it is not stated whether slots are regained after a short or long rest - if ever!

So, if the PCs engage a Spirit Naga and force it to retreat to a safe haven, what will the Naga's spell repertoire look like in two hours? In a day?

The monster has a list of spells known or prepared from a particular class.

You can change the spells that a monster knows or has prepared, replacing any spell on a monster's spell list with a different spell of the same level and from the same class list. If you do so, you might cause the monster to be a greater or lesser threat than suggested by its challenge rating.

The monster is considered a member of that class when attuning to or using a magic item that requires membership in the class or access to its spell list.

Before a spellcaster can use a spell, he or she must have the spell firmly fixed in mind, or must have access to the spell in a magic item. Members of a few classes, including bards and sorcerers, have a limited list of spells they know that are always fixed in mind. The same thing is true of many magic-using monsters. Other spellcasters, such as clerics and wizards, undergo a process of preparing spells.

Notice, that the word "many" is used, not "all". If you read Monster Manual, you will notice that there are 2 types of casting for monster: innate or one that has spells from one of the spellcasting classes. Since word "many" applies only to a part, it is clearly means, that only one part of the magic using monster does not need to prepare them. That part are monsters with innate spellcasting. The other part goes with the rule:

Other spellcasters, such as clerics and wizards, undergo a process of preparing spells.

Morefurther, to prove my point:

Drow Mage, and Drow Priestess of Lolth are basically Drows who took some classes of wizard or cleric, since their innate magic is not so powerful(you can easily create such a character like it was a PC). Notice that both of them are not called "wizard" or "cleric" but spellcasters with prepared spells from wizard/cleric list.

If someone is still uncertain, there is a reply from wizards: 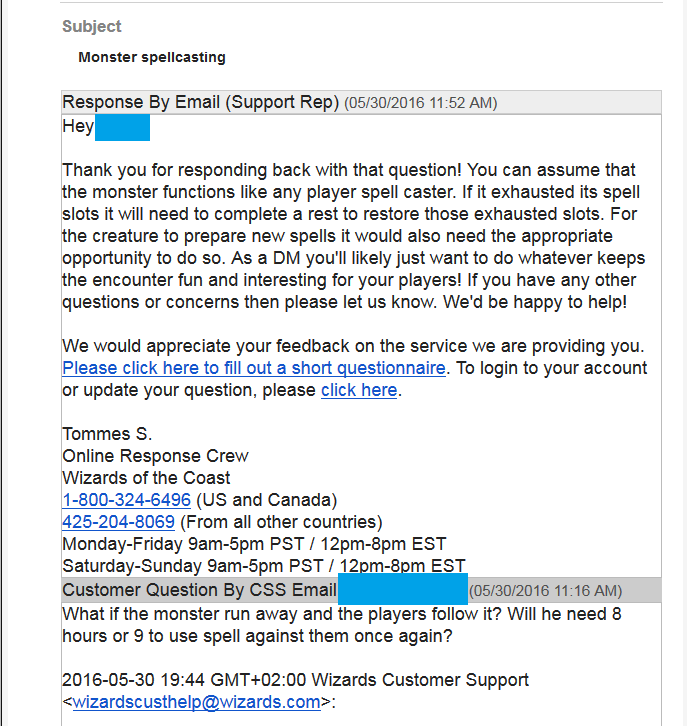 Basically this means, that you should treat the monster depending what kind of spellcasting they have.

Finishing a long rest restores any expended spell slots (see chapter 8 for the rules on resting). Some characters and monsters have special abilities that let them cast spells without using spell slots.

This means, unless the monster has a special ability to regain spell slots, it needs a rest.

Such an example would be Lich:

On initiative count 20 (losing initiative ties), the lich can take a lair action to cause one of the following magical effects; the lich can't use the same effect two rounds in a row:

I don't know that there is a RAW answer to what the difference is between swapping out spells prepared vs. spells known, since they're used interchangeably in the Monster Manual, but as far as recovery is concerned, spellcasting monsters have their spells listed as x/day. That could mean a literal day or that they refresh after a long rest (in the vast majority of cases, you wouldn't need to track rests for monsters, but you may want to in your naga example.

Not the answer you're looking for? Browse other questions tagged dnd-5e spells monsters or ask your own question.

9
Does a Flameskull recover its spell slots when it Rejuvenates?
0
Can a simulacrum true polymorphed into an archmage regain spell slots?

18
Can an Arcane Trickster Rogue learn all of the wizard spells from the low levels it has slots for?
4
How many spells can a Cleric prepare?
7
Ghost possession and casting spells?
9
Are a Wizard's “spells known” what they have in their spellbook or what they can prepare?
7
How does racial spell casting interact with spell casting class levels?
5
Is my homebrew spellcaster class overpowered or unusable?
15
Can monsters using innate spellcasting have their concentration broken?
2
Are there monsters with a natural ability to move between planes without casting a spell?
10
Is my adaptation of the Battle Master as a Wizard subclass balanced relative to other Wizard subclasses and to the original Battle Master?
8
How do Bards prepare spells?