Is my Dodge bonus for Total Defense applicable in this situation?

Playing a play-by-post 3.5 homebrew campaign. The gist: my Warblade (with Uncanny Dodge) wants to climb on top of the barrels and see what's in the main chamber. He doesn't know how many or how they are armed, but he knows there are a ton of goblins waiting in the chamber. I want to know if I can claim the dodge bonus for total defense in this situation. We aren't in official combat rounds.

Here is what I posted:

Here is the DM's response:

Vesuvio climbs on top of the barrel and pushes the one in front out of the way. It crashes to the ground in front of him, loudly and immediately, a hail of arrows and bolts shoot all around him, sticking into the barrels and Vesuvio as well! One shot takes him right in the chest knocking the wind out of him. As the pain of all the strikes swarms through his body, Vesuvio looks up and can make out a horde of goblins standing all around nocking their bows and reloading their crossbows. Others were still pushing more barrels across the floor, but stopped when the arrows flew, and have now drawn their swords and are taking cover behind the barrels. A few larger goblins stand at the back, closer to the fire, and they are holding tight to ropes attached to wargs who are growling and snarling, pulling on their leashes in an effort to run at Vesuvio. The goblins have come to fight!

He said all of the goblins had readied actions to shoot the first thing that came up. After which, he proceeded roll about 20 ranged attacks against my character. He gave me the regular DEX bonus, but not the +6 from Total Defense (I have 8 ranks in Tumble).

Should I have gotten the AC bonus from Total Defense against all of the attack rolls? (Reminder, I have Uncanny Dodge, if applicable) 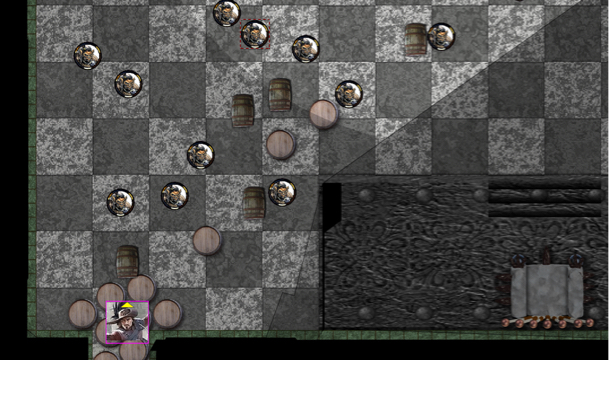 Both the goblins and Vesuvio are aware combatants and should've already been acting in initiative order. The goblins were aware of Vesuvio's presence (although probably not his location) else there'd be no reason to take the ready action.1 Vesuvio is aware of the goblins in advance of failing the Climb skill check because the question says so. Because they're aware of each other, both sides should be tracking time in combat rounds despite not being engaged in actual, sword-swinging, arrow-firing combat yet. As both sides are aware combatants, there should be no surprise round.

The DM should've let Vesuvio benefit from having taken the action total defense. Neither side is flat-footed. Vesuvio's uncanny dodge isn't a factor.

However, no matter what it was before, the foes that took the ready action now have their initiative moved to before Vesuvio's initiative, and Vesuvio's already taken his turn. This means those goblins will be able to take a full round action to make attacks against Vesuvio before Vesuvio sees his next turn. Because Vesuvio's total defense is still a thing, though, he'll probably be okay.

Like your other question, this one, too, sounds like the DM is reluctant to roll initiative, and, while you might want to encourage him to roll initiative early and more often (and politely and gently suggest rereading DMG 22-4 on Starting an Encounter2), you might also cut the DM some slack: running a tactical, simulationist role-playing game electronically is really difficult, and an occasional error, oversight, or judgment call here or there—especially if it seems fair enough, keeps the story moving, and engages the players—is probably okay.

1 Guards can be alert (that is, not distracted) without being ready. That is, guards don't regularly point their weapons at doors, ready to shoot whoever comes through. That's, like, really dangerous.
2 That whole section's pretty complicated, actually. I learned something new (or, at least, relearned something I'd forgotten I already knew and hadn't been using) from having read it again just now.

Based on this description, I would say that Uncanny Dodge doesn't come unto play in this situation, as you were not caught flat-footed (you were expecting a potential attack, as evidenced by your use of Total defense), unless the DM considers the out-of-sight goblins as 'invisible'. (Which is iffy)

Flat-Footed
A character who has not yet acted during a combat is flat-footed, not yet reacting normally to the situation. A flat-footed character loses his Dexterity bonus to AC (if any) and cannot make attacks of opportunity.

Based on this, I would again re-iterate that you were not flat-footed, and should have had your full Dex bonus, even on the barrels. If needed, you would have used your tumble skill to fall backwards (safely) into cover.

Total Defense
You can defend yourself as a standard action. You get a +4 dodge bonus to your AC for 1 round. Your AC improves at the start of this action. You can’t combine total defense with fighting defensively or with the benefit of the Combat Expertise feat (since both of those require you to declare an attack or full attack). You can’t make attacks of opportunity while using total defense.

Based in this description, it sounds like your character would have been more than prepared to avoid being hit. Unless your actions were going against what the DM had planned (and s/he was robbing you of autonomy), I'm with you on this one. Even though the goblins had readied attacks, your 'readied defense' should not be nullified.

I just read the climb skill descriptor, and found this:

You need both hands free to climb, but you may cling to a wall with one hand while you cast a spell or take some other action that requires only one hand. While climbing, you can’t move to avoid a blow, so you lose your Dexterity bonus to AC (if any). You also can’t use a shield while climbing.

Depending on your DM's interpretation of the situation, and how exactly you needed to climb those barrels... The above caveat may be what happened. Still, you could argue that your use of tumble should allow you to at least fall backwards...

It sounds like the "climb" portion of your turn had been completed, so I would have granted the AC bonus for both Dex and Total Defense.

If the DM thinks you were still climbing:

He does not get any dodge bonus for Total Defense either, for the same reason. You lose all dodge AC bonus when flat footed (climbing).

I would also have argued that you cannot use Total Defense while climbing unless you have a listed speed for climbing (like a spider would). So if you stated a Standard Action of Total Defense, its benefits would be suspended while you are climbing.

Not the answer you're looking for? Browse other questions tagged dnd-3.5e combat .

5
Can you use Total Defense out of combat?

9
Flanking while using Total Defense?
7
What is the total net bonus when attacking an unconscious creature?
8
Adjusting Combat Balance
4
Is there any benefit to using Total Defense when a character has Combat Expertise?
15
What is the RAW of how Dodge works?
5
Can you use Total Defense out of combat?
6
Does Uncanny Dodge allow me to retain my Dodge bonus to AC when flat footed?
6
Does the Factotum's Cunning Brilliance allow for more prestige class levels than intended?