Is it possible to dual wield two double weapons with two hands for four attacks?

I have tried googling it, went through over 50 books, overviewed Dragon Magazines, Wotc Articles and couldn't find anything.

Is there any race, template, feat, class feature, spell, power or other character option that would allow to use a double weapon (might be a natural weapon) with one hand and yet be able to make attacks with both ends as if it were being held with 2 hands? How attacks would be resolved? Would it be possible to perform quadruple attacks like this, with a double weapon in each hand?

If there is no option for that, is there a weapon, magic item or an artifact that could act as mentioned?

The reason for this would be to make a character similar to Warcraft 3's Illidan Stormrage, who wields double weapons in both hands and can perform a quadruple slash with them.

A gif, from warcraft 3 showing a quadruple slash made with 2 double swords. 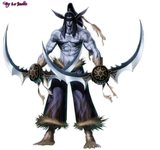 Like KRyan says in his answer, it's unlikely there's a way to wield a double weapon in one hand yet benefit from the double weapon as if it were wielded in two hands. However, for a dragonsplit alternative—both because the the Monster Manual IV doesn't provide the weapon's cost and because dragonsplit is a really dumb name—, there's the crescent knife (Dragon #275 43, 44) (20 gp; 1 lb.).

The crescent knife, an exotic weapon, appears only in Andy Collins' article "The Right Tool for the Job" even though most of the article's other weapons are reprinted in Sword and Fist. It's a Small melee weapon in Dungeons and Dragons, Third Edition terms (therefore the DM likely making it a light weapon in 3.5 terms) that deals 1d3 points of slashing damage and ×2 damage on a critical hit. Hiding behind these unexceptional statistics is a description that's pretty crazy:

This weapon, which resembles a crescent-shaped blade affixed to a crossbar handle, allows its wielder to make two simultaneous attack rolls (using the same modifier) each time he attacks with it. Each attack is resolved separately. (44)

There's even errata for the crescent knife:

The crescent blade should have an additional phrase added to the last sentence, making it read as so: "Each attack is resolved separately, but only half the applicible Strength bonus to damage is applied to any hit." (Dragon #277 120)

(As no other weapon in the article uses similar mechanics or has a similar name, I assume the editor meant crescent knife not crescent blade. Ask the DM. Further, as a Dungeons and Dragons, Third Edition item that was never updated to 3.5, the DMG on page 4 says that the item's 3.5 legal but is nonetheless subject to what it calls "minor adjustments" by the DM. Again, ask the DM. Finally, bear in mind what an attack roll means.)

This makes the crescent knife—sort of, in a way, from a distance in poor light, if you tilt your head and squint, just maybe—a light double weapon, except for, well, a lot of exceptions. But, if the DM agrees, a Medium creature may be able to wield two crescent blades each designed for a Large creature 1-handed with a −2 penalty on attack rolls for inappropriate size (and, obviously, standard penalties for two-weapon fighting), which might be close enough visually.

As one of the few exotic weapons that's actually worth the Exotic Weapon Proficiency feat, some care should be exercised in introducing the weapon into the campaign.

That covers my initial impulse, which was an undersized double weapon. A creature with slight build (e.g. web enhancement kobold) could even use that without taking penalties for the size issue. But with this rule in place, there is no particular advantage in doing so.

So far as I know, nothing in the game makes an exception to this statement.

The closest I am aware of are dragonsplits from Monster Manual IV, as shown here: 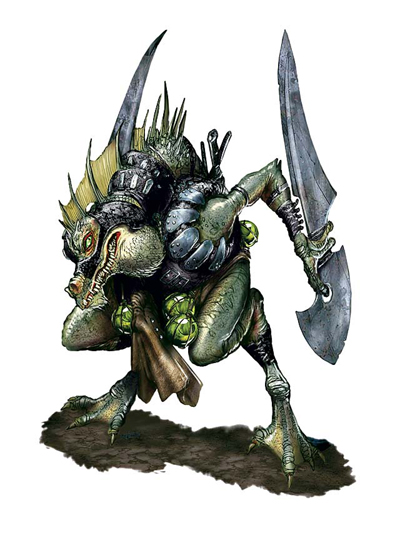 These have a piercing edge and a slashing edge. However,

Dragonsplits are not double weapons. Instead, a wielder chooses to use either the piercing edge for greater critical threat range or the slashing edge for a devastating (but rarer) quadruple-damage critical.

Unlike double weapons, dragonsplits do not have separate ends to enhance separately, and they can only be used with two-weapon fighting by using two of them. In addition, these are also better than undersized double weapons in that you can choose which edge to use on a per-attack basis rather than a per-round basis, giving you slightly more flexibility. Ultimately, though, there really isn’t any good mechanical reason to use these, as they are exotic and the difference between the two ends is minuscule in practice.

Also, while I haven’t played any of World of Warcraft, in Warcraft III at least, none of Illidan’s animations or cinematics depicted him actually using his weird blades like double weapons. His attacks were just slashes with one end or the other, no attempt to use both ends at once. Even the .gif you include in the question does not look to me like it would net more attacks than usual. It certainly didn’t, mechanically, in Warcraft III.

Not the answer you're looking for? Browse other questions tagged dnd-3.5e character-creation double-weapons or ask your own question.

-1
Is this homebrewed Double Whip balanced?

19
Can you dual-wield bows with four hands?
4
Embedding and attaching double weapons to Warforged, specifically spiked chain
1
Double weapons and switching hands
5
Slashing with Short Swords
11
What order are individual attacks taken in during a full attack action, and does it differ between editions?
4
Two-Weapon Fighting with a Single Weapon?
3
What is the Level Adjustment of this Gorilla Avatar of Nature template?
2
Two-Weapon Fighting and Double Weapons
1
Thri-Kreen multi-attack total attack bonus calculation