How similar to normal attacks are attacks made with a telekinetic violent thrust?

move objects or creatures by concentrating on them.… [T]he spell can… exert a single short, violent thrust [allowing] the spell energy [to] be spent in a single round. [The caster] can hurl one object or creature per caster level (maximum 15) that are within [the spell's long] range and all within 10 feet of each other toward any target within 10 feet per level of all the objects. [The caster] can hurl up to a total weight of 25 pounds per caster level (maximum 375 pounds at 15th level).

[The caster] must succeed on attack rolls (one per creature or object thrown) to hit the target with the items, using [its] base attack bonus + [its] Intelligence modifier (if a wizard) or Charisma modifier (if a sorcerer). Weapons cause standard damage (with no Strength bonus; note that arrows or bolts deal damage as daggers of their size when used in this manner).

The creature using telekinesis is an overseer (Lords of Madness 139-40), a treelike, tentacled, unimaginatively named beholderkin which has telekinesis as a supernatural ability as a level 14 caster via one of its thirteen eye rays. ("An overseer can move objects or creatures [n.b. plural] that weigh up to 350 pounds, as though with a telekinesis spell," so there's no issue with it tossing around multiple objects simultaneously even though it's using an eye ray.). 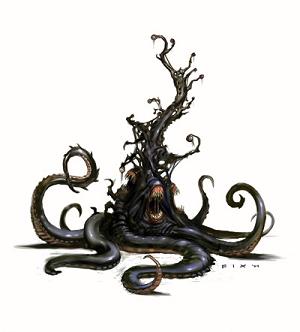 It's related to beholders. I kid you not.

Anyway, below are the questions.

The plan is to have the overseer take a few minutes to create a big pile of Large greatswords or halberds nearby with its major creation eye ray (again, not kidding—the weapons'll last 14 hours) and, when it's time to fight, violently thrust the weapons in batches of 14 at the PCs. (Admittedly, considering the overseer's other eye rays—like dominate person, polar ray, and temporal stasis—, this seems sort of desperate and is sort of dumb, but, hey, monsters! What are you gonna do? Am I right?)

Given this aberration's lack of weapon proficiencies and it needing its feats for better things, I want to confirm that violently thrusting weapons at foes is superior to simply using the combat maneuver version of telekinesis to disarm or trip the PCs.

Most of modifiers affecting a regular attack would affect violent thrust.

You must succeed on attack rolls (one per creature or object thrown) to hit the target with the items, using your base attack bonus + your Intelligence modifier (if a wizard) or Charisma modifier (if a sorcerer).

An attack roll represents your attempt to strike your opponent on your turn in a round. When you make an attack roll, you roll a d20 and add your attack bonus. (Other modifiers may also apply to this roll.) If your result equals or beats the target’s Armor Class, you hit and deal damage.

The spell states that you use your BAB and Int or Cha modifier, however it doesn't state to use only them.

Feats and features that apply directly to ranged attacks should also affect violent thrust, since you perform an attack roll.

There is nothing stating, that violent thrust itself would provoke an attack of opportunity. It doesn't even take any additional action. It is simply one of alternative uses of the spell.

The last question is arguable.

It is possible to throw a weapon that isn’t designed to be thrown (that is, a melee weapon that doesn’t have a numeric entry in the Range Increment column on Table: Weapons), but a character who does so takes a -4 penalty on the attack roll.

This covers subject of weapons or items not typically used for throwing, since you rather thrust them violently rather than just throw.

Weapon proficiency is a tougher subject.

A character who uses a weapon with which he or she is not proficient takes a -4 penalty on attack rolls.

Have you considered to give your monster a few classes of Master of The Unseen Hand? It is great for combat use of telekinesis.

Not the answer you're looking for? Browse other questions tagged dnd-3.5e spells attack or ask your own question.

3
Can Master of the Unseen Hand telekinetically wield multiple weapons?
1
How does the Telekinesis spell's Violent Thrust option work?
3
In this situation, what are the best tactical uses for at-will major creation?
5
Can a Master of Unseen Hand wield oversized weapons with telekinesis? And would he have the -4 on the attack?
2
Beholderkin Overseer's Major Creation: Can it be used offensively?

12
How many rays can a beholder use in one full-attack action?
6
If you make a ranged touch attack with an ongoing, visible spell can you benefit from being invisible?
11
How does the ring of mystic fire interact with scorching ray?
9
Effects of Haste on a Beholder
4
Ray of enfeeblement wording
14
Can I target multiple creatures with a readied spell that can target multiple creatures?
1
How does the Telekinesis spell's Violent Thrust option work?
13
Does Scorching Ray being fired at a single target count as one attack for the purpose of the Help Action?