I'm running a 5e, self-written, horror/psychological themed adventure for a group of experienced players this weekend. Noting that many players have the mindset of "meh, if this character dies I'll roll a new one", I'm finding it difficult to come up with combat scenarios that are actually unsettling or scary.

The main villains of the adventure are home-brewed living shadows which possess a startling degree of intelligence and always use the surroundings to their advantage. The players will have to fight many of these shadows over several encounters that will increase in frequency and severity the closer the PCs get towards their goal.

My current ideas include:

I do also want to make some normal combat unsettling as well, but I'm having difficulty thinking of anything that doesn't include the darkness aspect and I feel overusing darkness in these scenarios can make the players' perspective go from "This is creepy" to "Oh look, this again" fairly quickly.

What are some ways I can make encounters legitimately terrifying either with darkness elements or without?

NOTE: The players' characters are level 11 so there can be quite a decent degree of danger involved

If they aren't scared of death, make them scared of negative modifiers.

Nothing is stopping you from having a monster tear a guys arm off in battle with a particularly vicious strike. The kind of magics needed to reconstruct a limb are a lot harder to come by.

Other things you can run into are things that can cause real damage to magical weapons and gear. Things that erase spells from a wizards mind (temporarily, you want to scare them not give them a stroke). Things that steal all the rogues money.

Think outside the box. Death isn't always terrifying, especially with the ease of reviving people. Being a burden to the team because you're short an arm and leg would be. Not being able to use Zeus' Lightning Sword of Olympus because it's two handed and you don't have a right hand would be enough to terrify your Champion until he's rolled into a ball crying.

Think about critical wounds. Take an eye. Make somebody deaf for a weak. Cripple the most mobile member of the team.

See how they react. Watch how fights become a more cautious affair, as traps no longer deal just damage, but take things from your players permanently.

When describing combat encounters, you need to use all 3 of these.

Describe the effects bloody of combat. Use all five senses. For example, the taste of the zombies blood as it sprays across a face, the smell of a giant spider's venom, the sound of a wight's laughter.

As well as describing what the monsters look like, describe their unnatural origin. For example, undead have some remnant of their former life (a locket, a tattoo of a lover). Giant versions of insects have cracked skin and strange-looking wounds.

Contrast the unnatural with the normal, the unfamiliar with the familiar. For example, in a fight with undead, describe blood spraying across a table, staining a nice home-made tablecloth.

Things half-seen out of the corner of the eye. Unexplained WIS (Perception) rolls. Mysterious laughter from the GM.

Even if the PCs are in bright light, the terror can still be there. In fact, mysterious drafts and unexplained sounds and faint smells can be even more terrifying in the light.

Use monsters that know facts about the players. It is terrifying when your enemy knows more about you than you do.

Eyes are a big part of social contact. Hide your eyes from the players. Maybe mirrorshades. Maybe a bright light from below (thing of campfire horror stories with a torch below the face, so the shadows are all wrong).

Watch IT. Pay attention to how Tim Curry makes a clown terrifying.

Terror/horror mostly happens in the mind.

To set the mood, turn the lights down low in the room where you are playing. You could go a step further and not use electric lighting at all, but only light four or five long burning candles. Now and again extinguish one or two of them. Later re-light some candles if necessary to fit the mood you want to build.

To vary the visual difficulties by using other problems than darkness, consider using:

Background music: at low volume, play the creepiest low pitched music you can find. (This will vary according to taste).

Pitch your voice to a lower register.

You can borrow one of Gary Gygax' old tricks (which I read about in Empires of the Imagination and IIRC in a blog post by Rob Kuntz): place a physical barrier between you and your players so that they only hear your voice as you describe encounters, but they don't see you. You can look out at them through slits or holes in the barrier to see what they are doing.

All of this helps you to set the mood.

Lastly, give an edge to the initiative rolls, and ability to surprise, for the monsters and NPC's opposing the players. (You don't need to tell your players you are doing this). A surprise attack can really get the adrenaline flowing.

I once used a form of possession in a crypt-like dungeon, where the main evil was a spirit that would/could temporarily take control of a random PC, turning that person against the party. The PC got a chance to resist the urge to do something nasty each round they were possessed, but could do nothing else during that time.

There was a pattern to when/how often these possessions occurred, and once they caught on to that, the fighter's uber sword ended up tied to his back for a bit, the cleric ended up carrying around the mages wand, etc.

Not only was it a way to burn down some of the caster's spells where they hadn't intended, but it got them all walking on tiptoes around each other for the majority of the adventure.

Combat is rarely scary. It's what comes before and after that matters.

It doesn't matter what you do as DM, combat is really just a matter of shouting out spell names and attacks and rolling dice. There can be the suspense of not knowing how it will come out, but I have never, ever seen a combat which was psychologically scary. Whatever fear-factor comes into play disintegrates with the first roll of the dice.

That said, I have seen setups that were scary. There are three elements you need. 1) A sense of a mystery being slowly solved. The mystery can be Scooby-Doo simple - the fun comes not from solving the mystery, but from seeing the solution unfold in its horrific form. If you are doing it right, the characters should dread getting to the answer. 2) An element that is off-kilter, unsettling, unnatural. Take any universal element of nature (or especially, human nature) and subvert it. The more dear the players hold that particular element, the more powerful the effect. and 3) Patience. Take your time developing the mystery and subversion. Put off combat for as long as you can, and make sure that all early combats are fleeting, inconclusive affairs that leave the players unsatisfied. With a little patience, you can get the players desperate for combat, seething that "if only we could get our swords on these buggers".

Combat will always been seen as a relief to the players. Combat is the normal means of resolving problems in DnD, and therefore every time you have a combat, your players will feel they are firm ground again. It doesn't matter how you dress it up the encounter, once the spells and swords come out, the game will be back to the ordinary.

First of all the -10 penalty looks relly exaggerated and I definitely think you should drop it to -5 or so.

The classical backstabbing shmuck the players will curse over and over again. Make sure he doesn't blow his cover to early. He may even intentionally harm himself in order to use up PC's healing potions or spells.

Using darkness is a simple and effective method as it makes the players uncomfortable with their limited senses. It also gives disadvantage on attacks and automatically fails any ability check that requires sight. If one of your PC's has darkvision consider using fog or the spell **Darkness*.

Always useful and will harm the PC's before the real fight. 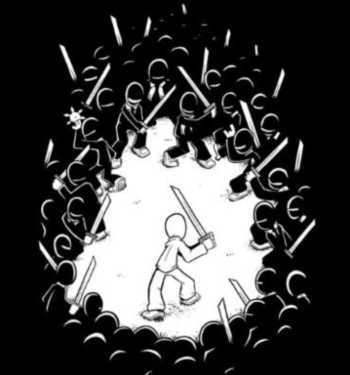 May it be puny goblins, but in the number of seven times the PC's, they are a perilous enemy.

There are plenty of different poisons on pages 257-258 of Dungeon Master's Guide, which will definitely spice things up.

Narrow corridors, tiny spaces make you crawl etc. You would like to use your ranged weapon? Too bad. Your own teammates are blocking you.

This is the battlefield of the mind, not of the tabletop. You need to have your players start questioning what they know and what you are telling them.

This is a fun thing, really, give each player a hidden, random, sanity score. Then have some of your monsters able to do damage to that sanity score. As the sanity score gets lower, the character starts to see or hear things that aren't really there. They might attack an ally by accident, or start whaling on what appears to be a chair to everyone else (it's a mimic, I swear, guys).

Once everyone is suitably crazy, have the final encounter be between what appears to be mirror copies of themselves. Remove the normal tokens from the board (unless you have multiple copies) and replace them with something neutral (I like using dice) as markers. When the players move, you ask them how they move, and move both tokens that represent the character and their doppleganger (doesn't have to be a real doppleganger monster, just using the term). Any attacks are mimicked perfectly, as are injuries. Set a timer on your phone, and at random, the lights go out and back on, and everyone has changed positions.

At the end of this encounter (when everyone is "dead") the party wakes up outside, bearing wounds and any injuries, but they have whatever they went in for. As they continue on their way, be sure to point out a few random things that they each spot or hear that nobody else does, just to reinforce the craziness that they suffered. You can feel free to keep doing this for the rest of the campaign to reinforce the psychological damage they underwent.

Not the answer you're looking for? Browse other questions tagged dnd-5e combat horror .

12
How is XP awarded for combat encounters?
75
How to ease down the munchkin factor?
16
How can rests be best managed in Tomb of Annihilation?
7
How to handle varying party size/players?
24
For a single party, how can I make Dead in Thay a "fast-paced assault" and not a drawn-out series of skirmishes?
6
Can effects like Darkness, Light, etc. be strobed in a single turn?
5
Coming up with a stat block for Cyrog from Out of the Abyss