Do occupied squares increase Tumble DCs for an invisible creature?

Inspired by flanking the invisible. 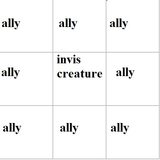 Picture this: The invisible creature, say Eveanthia the Elven Rogue under the influence of Greater Invisibility, wants to escape from the 9 'allies' (not her allies, obviously).

Up until now she is unharmed but her position is known. On her turn -being first because of her fabulous initiative- she decides to attempt to use her tumbling skills, in order to escape those foul smelling orcs (the allies of the Ogre-Mage she's been attempting to rob).

Normally, when visible, she'd have to succeed at a DC 25 Tumble check in order to do so.

No modifiers to the skill roll to tumble through an opponent's square when invisible by RAW.

DC 25: Tumble at one-half speed through an area occupied by an enemy (over, under, or around the opponent) as part of normal movement, provoking no attacks of opportunity while doing so. Failure means you stop before entering the enemy-occupied area and provoke an attack of opportunity from that enemy. Check separately for each opponent. Each additional enemy after the first adds +2 to the Tumble DC.

There are modifiers given at that link based on terrain that may increase the DC, but no bonuses to skill rolls or reduction in DC due to conditions on the tumbling character.

Visually undetectable. An invisible creature gains a +2 bonus on attack rolls against sighted opponents, and ignores its opponents’ Dexterity bonuses to AC (if any).

A DM might grant you that +2 on the Tumble roll instead, although that is not listed as a specific benefit anywhere. It would seem to come under the "if it's not in the rules, but seems to give an advantage, grant a +2" advice in 3.5E - technically this discretionary bonus is RAW, but it would have to be discussed at the table.

Note that if you do fail the check to move through an opponent's square and provoke an attack of opportunity, the opponent will not be able to take it, as you still have Total Concealment, which grants this:

You can’t execute an attack of opportunity against an opponent with total concealment, even if you know what square or squares the opponent occupies.

So being invisible is still doing something for you here - it removes the risk associated with failure.

Not the answer you're looking for? Browse other questions tagged dnd-3.5e skills invisibility difficulty-class or ask your own question.

8
Can an invisible creature be flanked by surrounding it?

6
How do I set DCs for attempted grappling kills?
8
Can an invisible creature be flanked by surrounding it?
13
How can PCs keep up when maneuver DCs increase so quickly?
6
Are a blinded creature's squares as hard to Tumble through as a sighted creature's?
10
Does failing to tumble through an occupied space end your action?
6
Is a new Tumble check made for each threatened square?
11
Should the DCs for skill checks be higher or lower than saves?
1
Developing skillcheck DCs for an adventure
6
How can I increase the DCs of alchemical items?
2
Do Spellcaster Class DCs not increase?