Flanking and swarms in 4e

Can swarms be flanked by two PCs? What if the swarm is occupying the same square as a PC?

Does a PC grant combat advantage to a swarm if a regular mob is adjacent in a flank? Does it matter if the swarm occupies the same square as the PC?

Does a PC grant combat advantage to a mob if a swarm is adjacent in a flank? ... in the same square?

The DDI Compendium states for the Swarm trait:

The swarm can occupy the same space as another creature, and an enemy can enter its space, which is difficult terrain. The swarm cannot be pulled, pushed, or slid by melee or ranged attacks. It can squeeze through any opening that is large enough for at least one of the creatures it comprises.

Combat Advantage: You have combat advantage against an enemy you flank.

Must Be Able to Attack: You and your ally must be able to attack the enemy, whether you’re armed or unarmed. If there’s no line of effect between your enemy and either you or your ally, you don’t flank. If you’re affected by an effect that prevents you from taking actions, you don’t flank.

Large, Huge, and Gargantuan Creatures: If a flanking creature’s space takes up more than 1 square, the creature gains combat advantage if any square it occupies counts for flanking.

So I'd say there's no restriction for flanking swarms in the rules, though I can certainly see how it could be more difficult in "real life" than flanking a normal-sized creature.

The key thing I'd focus on here is the rules for flanking.

Trace an imaginary line between the centers of the characters’ squares. If the line passes through opposite sides or corners of the enemy’s space, the enemy is flanked.

You and your ally must be able to attack the enemy, whether you’re armed or unarmed. 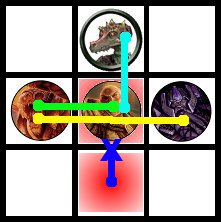 Q. Can a swarm [red] be flanked by 2 PC's?
A. Yes [yellow line passes through opposite sides]. There are no special rules for flanking swarms to my knowledge.

Q. Does a PC grant combat advantage to a swarm if a regular mob is adjacent to it (and vice-versa)?
A. No [cyan line does not pass through opposite sides].

Q. Can a swarm flank a PC with another creature?
A. If the swarm can usually only attack creatures in its space (Reach 0), No [blue]. Some swarms have this property. Other swarms have a normal reach (Reach 1) and thus can flank as normal.

Not the answer you're looking for? Browse other questions tagged dnd-4e combat monsters or ask your own question.

8
Does a Flaming Sphere gain combat advantage with its initial attack against a prone enemy?
5
Swarms' limited immunity to OAs
11
Does flanking grant combat advantage to all allies?
7
Are two creatures sharing one square adjacent to each other?
3
What are the positives and negatives of this house rule for flanking?
4
What's the reach of swarm creatures?
10
Does moving into an opponent's square generate an Attack of Opportunity when you do so with a 5-foot step?
2
Does shifting stop the Opportunity Attack benefit of Polearm Gamble?
11
Who benefits from flanking?
6
Can tiny (or smaller) creatures typically never attack in melee?