Unicorn Divine Bond Mount for a Paladin: How do I get one?

So, I'm experiencing some confusion which is likely a result of a lack of original sources for the feats and features involved.

The feats I suspect that I may need are any to all of the below:

So, my questions are:

I want to emphasize that I want the Unicorn to be my Divine Bond animal (i.e. an Animal Companion). Simply purchasing a Unicorn on the black market is not a valid answer to this question.

The enhancement at level 11 adds the celestial creature simple template and "becomes a magical beast for the purposes of determining which spells affect it."

The Monstrous Mount feat can give you something a little cooler than this, but of the mounts listed, unicorn is not one. The options listed there are:

Monstrous Companion also gives you access to a companion which is monstrous, but again unicorn is not listed there.

Leadership can grant you a cohort in addition to your animal companion, but doesn't modify your divine bond class feature .

This does not mean you can pick a celestial creature or magical beast, only that the bond you already have (since level 5 when you chose to take a steed) becomes a magical beast.

Without GM fiat, there is no way to gain a unicorn as your divine bond mount (and I think most unicorns would be quite offended by the notion that they are mere beasts of burden, to be mounted and ridden upon by men, for noble purposes or otherwise!).

From what I found, I have to agree with LegendaryDude.

According to the Divine Bond section of the Paladin page on D20pfrsd:

At 11th level, the mount gains the celestial creature simple template and becomes a magical beast for the purposes of determining which spells affect it.

Following the link to Animal Companion we can find this:

One of the surest ways to complicate the relationship between an adventurer and her animal companion is to cast awaken on the beast.

And for those of us who have yet to memorize all the spells (ex. myself):

Two final pieces of information are needed before we can begin our extrapolation: the "animal companions" accessible to a paladin of 11th level, and the stat block of a unicorn.

The list of "animal companions" available to a player with an effective druid level of 11 but is not an actual druid according to the Sample Animal Companion page is:

Presumably, you could select any of those animals as your mount, as long as you cloud justify it to your GM.

Yes, unicorn is not on that list, that is where the second piece of information ties in along with where I mentioned the awaken spell earlier.

What We Want to Know

Is it possible for a paladin to have a unicorn as it's divine mount through the effects of feats (such as Monstrous Mount, Monstrous Companion, and/or Leadership) and the effects gained at 11th paladin level.

Unicorn is not on the list of accessible companions to a paladin through any listing that I could find in an hour of searching.

The reason I brought up the awaken spell is that it contains a pretty important point. "An awakened animal can't serve as an animal companion, familiar, or special mount" because they are too intelligent to be considered a "regular beast." Having an awaken animal as your mount would be akin to having an Elf or Dwarf throw you on their shoulders and sprint through the land.

And for our purposes, technically a Unicorn would be considered to be an "awaken animal." It has an intelligence score of 11 (which is above average for humans) and a charisma score of 24 (which is heads and shoulders about most of the top tier influential people of any race [except goblin, but that's different]). Thus being awaken, it can't serve as a mount.

If one had a high enough leadership score (which for an 11th level paladin of all classes should be a piece of cake), you could possibly attract a unicorn as a cohort. Then, if your GM is feeling nice/lenient/bribed you could possibly be able to ride a unicorn then, but that is still doubtful.

Unless your GM specifically says you can, there are no rules that allow you to be this guy: 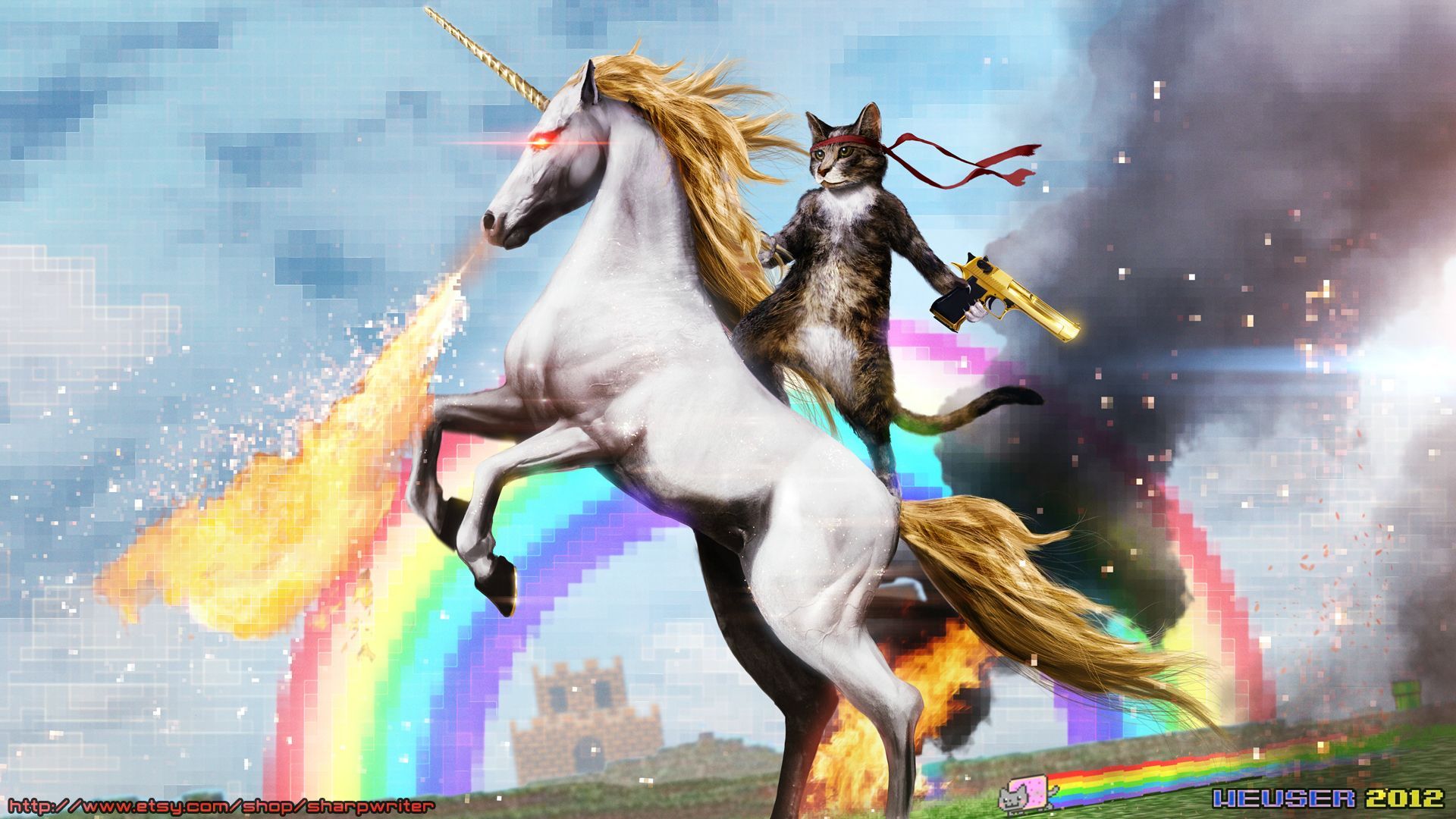 (Though if you're gun-slinging Catfolk paladin, you play paladins waaay differently than I have ever seen them played.)

A paladin can never (well almost) have a unicorn mount as the only way to get one appears to be via a monstrous cohort with leadership as neither monstrous companion or monstrous mount allow it (as mentioned above). Cohorts have a rule that explicitly states that a cohort can not oppose the PC on either alignment axis, meaning a LG Paladin may not have a CG unicorn.

Exceptions would be the Grey Paladin archetype, or a fallen/atoned paladin.

Not the answer you're looking for? Browse other questions tagged pathfinder-1e animal-companions or ask your own question.

2
Does the animal provided by the Wild Cohort feat count as an Animal Companion?
6
Can I let my mounted Animal Companion act independently or do I have to use Beast Master's command to control it?
4
Is it possible to apply archetypes to familiars and animal companions obtained via feats rather than class features?
7
How can ordinary plants be turned into creatures?
6
What determines "effective cohort level"?
4
Hunter Animal Companion(s) clarification
3
Monstrous Mount - Animal or Magical Beast?
4
Feat prereqs - Monstrous Mount
5
Is this homebrew Circle of the Companion subclass for Druid balanced?