Can reach weapons attack and receive attacks of opportunity with an ally in the way?

Can a reach weapon attack and receive attacks of opportunity through a square occupied by an ally, and without penalty?

The situation was a pair of skeletons, one in a single-creature-wide choke point I was blocking, and another behind it with a glaive, when I provoked an attack of opportunity:

In my D&D 3.5e party I am essentially the tank, cruising around with the highest AC. So my party enters this dungeon and we stumble upon these two 5-foot wide and 10-foot tall stone doors. I roll a strength check to open them and succeed, only to see four skeletons rise from their caskets and charge at me. So I proceed to try and close the giant stone doors, which is a choke point preventing any skeletons except the one in front of me from attacking. I provoke an attack of opportunity from the skeleton in front of me, and apparently, another AoO from the skeleton behind that skeleton who has a glaive. The situation looked something like this: 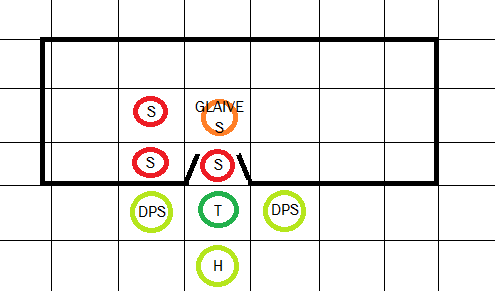 The Player's Handbook on Cover and Attacks of Opportunity says, "You can't execute an attack of opportunity against an opponent with cover relative to you" (151). In this case, you have cover from the glaive-armed skeleton because of the skeleton directly in front of you.

To be clear, "When making a melee attack against a target that isn't adjacent to you (such as with a reach weapon), use the rules for determining cover from ranged attacks," and, although this is merely soft cover, "even your enemies… can provide you with cover against ranged attacks" (both also PH 151). Taken all together, this should've made it impossible for that glaive-armed skeleton (if a typical glaive-armed skeleton) to have made an attack of opportunity against you, even if the DM ruled that closing the giant stone doors provoked attacks of opportunity. The one right in front of you can still stab you with an appropriate weapon under such a ruling, though.

One way to fight normally with a reach weapon despite enemies or allies providing such cover is by taking the feat Precise Swing (Eberron Campaign Setting 56). A skeleton of sufficient base attack bonus could have this feat were the skeleton created by and labored over by a being possessing the feat Graveborn Warrior (Dragon #312 38). However, given the obscurity of both feats, this seems unlikely.

Not the answer you're looking for? Browse other questions tagged dnd-3.5e opportunity-attack reach .

12
Do creatures get an attack of opportunity against targets with soft cover?