A cat o'nine flails, a new weapon of my devising, is a 9 headed flail similar to an Ochsenherde. Note that this is not to be confused with a cat o'nine tails. 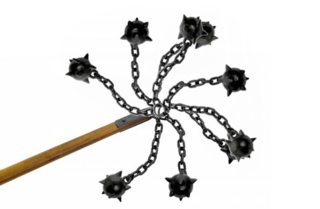 What is the best way to stat a weapon such as this in D&D 3.5e? My initial suggestions is as a two-handed Exotic Weapon with 1d12 damage and a 20×2 critical.

If no other opinion then how would you make it balanced?

The stats you have suggested seem a bit too weak, if anything. As written there's no reason to take it over a Greatsword! I think there are a couple of ways to go about this unusual piece of equipment.

1. Use stats for an existing weapon. The simple thing to do would be to just use it as a 'Heavy Flail' by another name.

This would make it a two-handed Martial weapon with 1d10 damage, 19-20x2 critical and Bludgeoning damage. It would also give bonuses to Disarm rolls and allow the user to make Trip attacks. This last point seems a common property among flails in D&D 3.5

2. Design a new profile If you go down this route then it would certainly count as an Exotic weapon and is very likely to be wielded two-handed. It should also be a straight upgrade over the Heavy Flail to justify needing a feat to wield it.

Here you could just increase the damage by one step up to a D12 and call it a day. If you really wanted to push the boat out, then upping the damage further still to 2D6 would effectively make it a Greatsword with some fancy properties - which seems reasonable for an Exotic weapon.

If going down this route, don't forget to keep the Disarm/Trip traits which seem inherent to all flail weapons.

Not the answer you're looking for? Browse other questions tagged dnd-3.5e weapons balance homebrew-review or ask your own question.