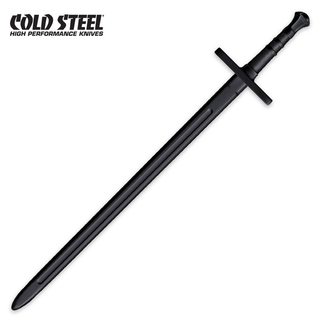 Cold Steel (as pictured above) and other companies make polypropylene training weapons. Are these safe to use when LARPing?

When in doubt, check with the person responsible for weapon checks at your LARP, but training weapons like this are considered NOT safe for most non-historical LARPs.

Always check with your Herald/Reeve/Rules Guy before bringing a new weapon onto the field. They'll be happy to help. Usually, they'll be checking for a few things. I'll break these up by categories, since the answer varies a bit by what you're doing:

Historical LARPs like SCA generally have very strict safety standards, but since everyone is wearing armor they break down to require that weapons be dulled and metal. There may be restrictions on chain length for hinged weapons as well. Again, this varies from organization to organization and even chapter to chapter.

Fantasy Combat LARPs with No Player Contact like Amtgard or Hiraeth will generally be much more towards the pool noodle end of things. There is a minimum diameter for weapons and no minimum weight. This helps keep everyone safe, and cores out of people's eyes. Speaking of, these kinds of larps don't allow metal weapons of any stripe, so without knowing the core material (the rigid shaft in the center of most foam weapons) it will probably be tossed.

Fantasy Combat LARPs with Player Contact like Dagohir allow for minimum weights and diameters for their weapons, but allow contact between players. These sorts of Larps will also find metal cores unacceptable. In general due ot the player contact, Contact larps like this require cloth covers on non-shield equipment, since that prevents jagged edges that can occur sometimes on plastic-coated weapons.

Sci-Fi/Apocalypse NERF LARPs are actually the most welcoming of this kind of weapon, but it will varies. The new-ish Fall of Man LARP would allow this weapon since it is similar to the hand-held weapons that NERF produces. This is probably the only one outside a Historical LARP that would allow this on the field, but you'd need to be very careful with it.

Answering your question from the perspective or Russian LARP culture, there are two main systems:

Of course, polypropylene weapons are banned in the case of point 1, besides some really short knives that are sometimes allowed. For point 2, it depends, the safety standards usually regulate weapon weight and the minimum width of the blade.

In any case, at each event we usually have one guy responsible for censuring weapons. He is to decide which weapons are allowed and which are not. Ask your weapons guy when in doubt. :)

Not the answer you're looking for? Browse other questions tagged weapons larp physical-safety .

15
Any tips for two-weapon training in LARP?
9
What is the most widely used safety standard for larp weapons?
3
What weapon training is required to fire ship weapons?
6
Is expanding foam a suitable material for LARP weapon construction?
15
LARP Cannon with actual projectiles
4
Are anti-personnel catapults used in LARPs?
31
Is a CO2 fire extinguisher safe to use indoors to represent offensive magic or breath weapons in LARP?
36
As a non-smoker, how can I simulate smoking this pipe at a LARP?
23
How to get real-looking rust that will be safe to the touch?