Help me identify this 1980s book about role-playing

I'm trying to find a book which a friend had back in the 80s. I held it and browsed it, but I haven't seen it in over 20 years.

It was a hardcover with binding and cover like the original AD&D books, no dust jacket, and a slight canvas texture. However, the dimensions were more like a Stephen King hardcover, smaller and slightly thicker than what TSR printed at the time. The title may have contained fantasy and role-playing. It was a brownish color with a fantasy scene that I think had a dragon and some kind of ogre or giant. The cover art might've been wraparound, reminiscent of the AD&D Monster Manual.

It was definitely made to cash in on the late-70s and early-80s D&D craze. My friend bought the book at a grocery store that had a large selection of trendy books. The only clear memory of the book I have is that my friend's mom read it and objected to a passage detailing how a maiden was used to entice and trap a unicorn. The book drew a lot from folktales and mythology—much more than TSR products typically did.

I'm pretty sure the interior was black and white with some pen and ink illustrations. Also, I think it contained a complete but very rudimentary role-playing system.

The book's been in the back of my mind for years, but since starting playing 5e it's been driving me crazy that I can't recall the book or find a copy. I've searched Amazon, Abebooks, Alibris and Powells.

Thanks to all who answered. The questions and suggestions jogged my memory enough to finally dredge up this artifact from my memory.

The book was called Fantasy Wargaming (not role-playing) it was brown(-ish) and smallish and hardback and had a textured cover. I missed with the cover art no ogre or dragon. Here's the cover 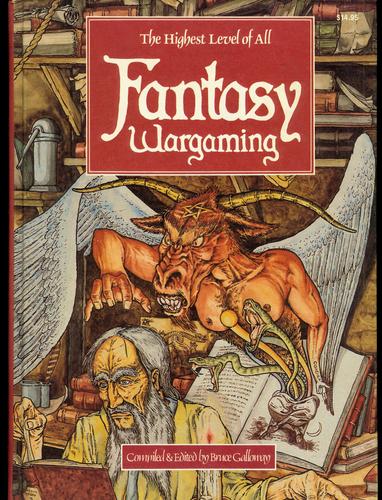 It was published in 1982. The editor was a historian from Cambridge. He was tragically killed in an accident two years after the book was published. And according to Amazon reviews the offending passage on unicorns is in there as well.

Are you thinking of High Fantasy or Adventures in High Fantasy? It sounds very much like what you're describing. They are two different books: a ruleset and a supplement. 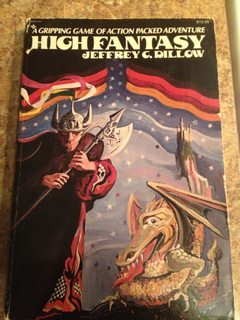 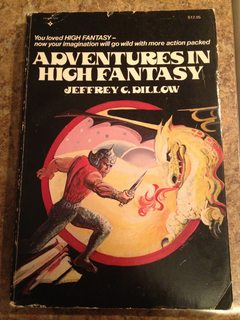 I have one of them kicking around somewhere.

Aside from the size, this sounds like Dragon Warriors which was published as a series of standard paperbacks.

It was an RPG system which started off with the basics in book 1 (along with at least one adventure) and then was expanded (e.g. with the introduction of a magic system) as the series went on.

It had a lot of traditional English folklore in it and my memory of the interior art matches your description. 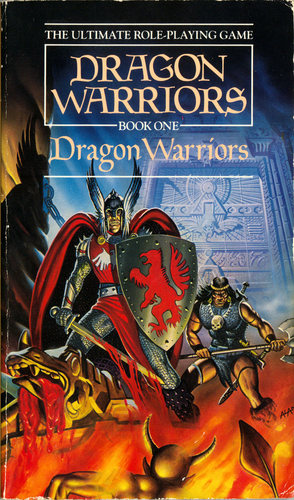 Not the answer you're looking for? Browse other questions tagged product-identification books .

26
What is the name of this book, covering character history generation?
7
What monsters are depicted in D&D 3E's Iconic novel, "Oath of Nerull"?
14
What's the RPG where one character class acts as a “conduit” or “catalyst” for the others' “spells”?
12
What was this 80s book about RPGs?
8
Looking for a non-fiction book on RPG gaming from the late '80s
17
Identify a role-playing poem about an artifact
12
What was this RPG that had rules for player-owned businesses?
14
What was this role playing game from the 70s or 80s?
13
Does anyone know the name of this RPG featuring possessed villagers in the Yorkshire Dales ca. 1980's?
9
Can anyone help me find this old RPG system using books to battle?