I know... that's a broad range of dates. I think it was close to 1994 or so. You played as humans hunting the monsters. One of my friends picked it up and we built characters and played through a session or two before dropping it, but it's been bugging me that I can't remember the title.

It came in a fairly slim paperback, about the size of the various "X Handbook" books (Fighters Handbook, Thieves Handbook, etc) for 2E AD&D. There were sketchy illustrations throughout the book, cartoony style with, I think, kind of an unfinished look to them. I remember there was a bit where someone was using a wood-chipper to finish off a monster, and another depicting one of the creatures, a disembodied set of clothing (as I recall it, the creature was created when lightning struck a box of detergent which was then used to launder clothing). The illustrations depicted the humans as the aggressors with the monsters trying to escape in many scenes while being chased by humans with superior weaponry.

I remember they had a wide variety of improvised and standard weaponry, including a listed cost and stats for a tank. I mainly remember that last one because my friend maxed out their Forgery skill and insisted that meant they could buy a tank because they would eventually roll high enough to forge a check that would pay for the amount (he was less than amused when I ruled that people had noticed his attempts to pass bad checks, not to mention that eventually, bad checks get discovered and the law takes a dim view of it).

I remember it as being campy, although I'm not certain how much of that was due to the illustrations, which had things like monsters being stuffed into woodchippers, monsters being chased by people with gardening tools, or one illustration showing a monster with a nametag along the lines of "My Name is Bob". The one creature I remember distinctly is the animated clothing with the creation method involving lightning striking detergent I mentioned above.

Unfortunately, I do not remember the dice system used, although I'm pretty sure it didn't have anything exotic enough to require something other than standard D&D dice, maybe even just d6's.

I've searched RPGGeek, although I'm not certain what to plug in other than "Monster Hunter" as part of the title (and none of the four result for that match my memories). I have also scanned through Wikipedia for systems released from 1980 to 1998 with no luck.

Based on the memory of an illustration of a nametag wearing monster, the cartoonish art style mentioned, and the correct size, I suggest the out-of-print 1990 game Attack of the Humans, from Rapport Games. Its style matches your description, being a very tongue-in-cheek game where monsters have returned to the planet and it's up to the Athletes, the Brainiacs, and the Typical People to fight them off. Sadly I don't have my copy any longer to confirm 100%. 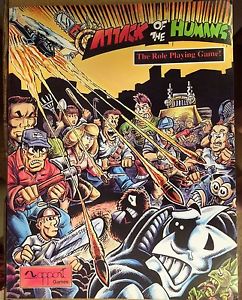 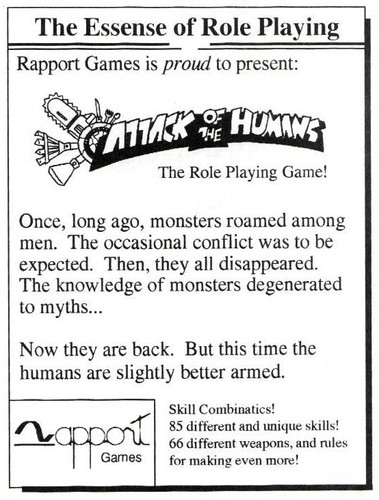 Was it The Hunters Hunted, by White Wolf? It fits the time frame and was mainstream enough, also using only d6s. 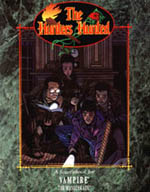 21
What was this Magic the Gathering RPG I remember?
2
What book describes consuming vials of vampire blood to pseudo-Rage?
12
What was this 80s book about RPGs?
12
I am trying to find a specific RPG that I can't remember the name of, player backstories affect setting
8
I've been trying to track down an old P&P RPG that I used to have years ago
6
I'm trying to find a module I played as a kid
12
What was this RPG that had rules for player-owned businesses?
15
What's the RPG about a journey from A to B, with examples about French soldiers going to kill Hitler and a team trying to win a TV race contest?
7
Rpg where the world is ending
13
Does anyone know the name of this RPG featuring possessed villagers in the Yorkshire Dales ca. 1980's?