The rule basis for “aerial traceries” of a spell [closed]

On most illustrations of a spellcasting the somatic component means doodling glowing magical glyphs in the air —Warcraft game and movie exemplify this, but the PHB itself has also images of it. (I am not sure what the magical lines/traceries/glyphs/runes are called or if they have ever been given a name by WotC, Pratchett or other... ???)

From what I understand the magic blue lines are not in 5e, PF or 3.5. A wizard does not give his position away in a dark room —bar for the Verbal chanting. A 3.5 caster with Silent Spell, Still Spell and Eschew Materials feats has to just do a Sleight Of Hand, Bluff or Perform to hide the pointing/mental targeting.

But was this always the case? Even in 3.0, AD&D or some splatbook? Or does the fluff anywhere mention the other characters' seeing of a picture being drawn in the air?

EDIT. More than a justification of it in the rules, I am after an insight into why it isn't there. It seems odd to me that the magical lines is how most picture spellcasting, yet it completely absent in the main rules. I fully agree that it's a required artistic licence otherwise the illustrations would be of a bunch of bearded men in a dress making pouty faces. Yet the aspects of spellcasting that would have a constraint on the caster, i.e. chanting (Verbal) and hand gestures (Somatic), are there.

I was wondering whether it was there in AD&D —which I have never played— and taken out as it seems strange it.

As far as I can tell:

By RAW, there isn't a reason.

In the Pathfinder and 3.5 SRDs:

A somatic component is a measured and precise movement of the hand.

Nothing more. Glowy trails look cool and magical, and it means you can tell something is happening in the art.

But if you want a flavor/fluff reason, here's my best guess.

(This is entirely my own invention, without support from official campaign settings or anything.)

Representing measured and precise movements in a still image is very difficult. The best way to show it, in instructions or diagrams, is to draw out the path as a line. Low-level spellcasters likely use this method to write down their somatic components, since it's easier to interpret than "forward three inches, then left one inch, then up a quarter-inch..."

Matching precise hand gestures to a diagram, however, is also difficult, especially when one wrong move could detonate your Fireball prematurely. This is a problem.

The "right" solution, as advocated by many a level-20 wizard, is to practice for hours upon hours until you know you can do it right. That's how we did it back in the day, you weren't allowed near a second-level spell until you could do the gestures in your sleep...

The "wrong" solution is to put a small Light cantrip on your fingers, so you can see the afterimage of your motion. 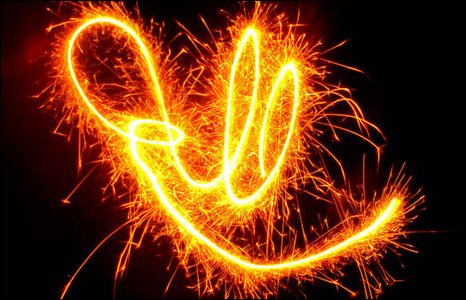 As a convenient bonus, it makes you look more impressive to potential employers, and lets party-members know when you're doing magic (and thus shouldn't be interrupted). So while older mages may disapprove, it's become a rather common technique among the younger spellcasters.

Not the answer you're looking for? Browse other questions tagged spells dungeons-and-dragons spell-components or ask your own question.

22
What is the reason for introducing the rule for Attacks of Opportunity in D&D?
5
Can a sorcerer cast other spells while in the shape of an Air Elemental?
10
Is there any material about words and gestures for Verbal and Somatic components?
9
Does a material component cost for one component require all components involved for the spell?
20
Are the somatic and verbal components of a spell the same for everyone?
7
Does casting a spell use a spell slot if you have the components for the spell?
21
What exactly is ignored in the “requirements” of a spell when Wishing for it?
4
Which components for the Simulacrum spell are consumed?
3
Which counts as water for the material component of the Create or Destroy Water spell?
8
Can a gem used as the material component for the Magic Jar spell also be used for the Imprisonment spell?