What is this RPG set in a cartoon universe?

I remember I used run a few games using an RPG which was based on a cartoon universe. It was really fun, some of the skills were outrageous. I cannot remember the name at all. Does anyone else know it?

You're probably thinking of TOON: the Cartoon Roleplaying Game, from Steve Jackson Games, published originally in the 80's, though I played it back in the 90's (and still have the rulebook at home somewhere, as well as the Toon ACE Catalog book). It looks like it's still available as a PDF from SJG.

It was a lot of fun, though not really sustainable for anything more than the annual one-off convention game. It did capture the feel of old looney tunes cartoons.

Wikipedia has this to say of the mechanics, which seem to match your memory:

The game uses a very simple skill-based task resolution system based on a list of only 23 skills that cover all possible character actions. These are assigned to four controlling attributes, humorously named "Muscle" (strength), "Zip" (dexterity and speed), "Smarts" (intelligence) and "Chutzpah" (pushiness and self-confidence).[3] In addition, characters can have optional "Shticks", which give them unusual cartoon-like abilities, such as flying or invisibility. 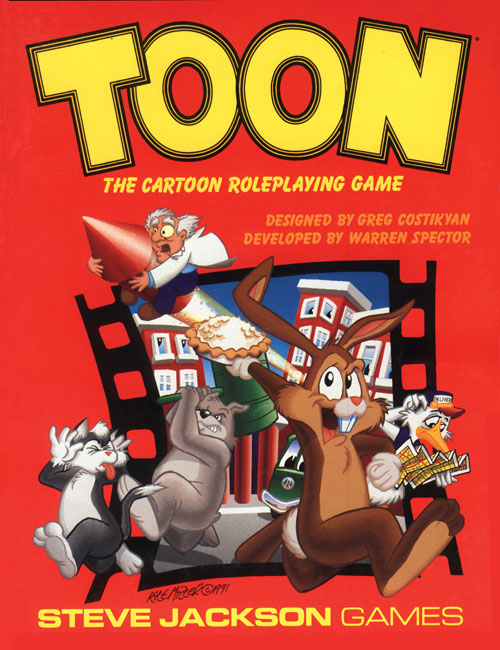 10
Which game system was the computer game HeroQuest based on?
21
What was this Magic the Gathering RPG I remember?
14
What RPG converted "choose your own adventure"–style gamebooks into adventure modules?
13
What is this RPG system based on character traits/motivations rather than ability scores?
8
Trying to ID a certain Superhero game
16
Mid-to-late 1970's Space Based RPG: what was it?
6
Boxed Set of Undead Hunting Adventures Compatable with the Rules Cyclopedia
2
What is this Call of Cthulhu scenario set in England or Scotland, where a a dilettante asks the characters to look for his missing daughter?
11
RPG with Rats as PCs?
19
"Tarot" based RPG?